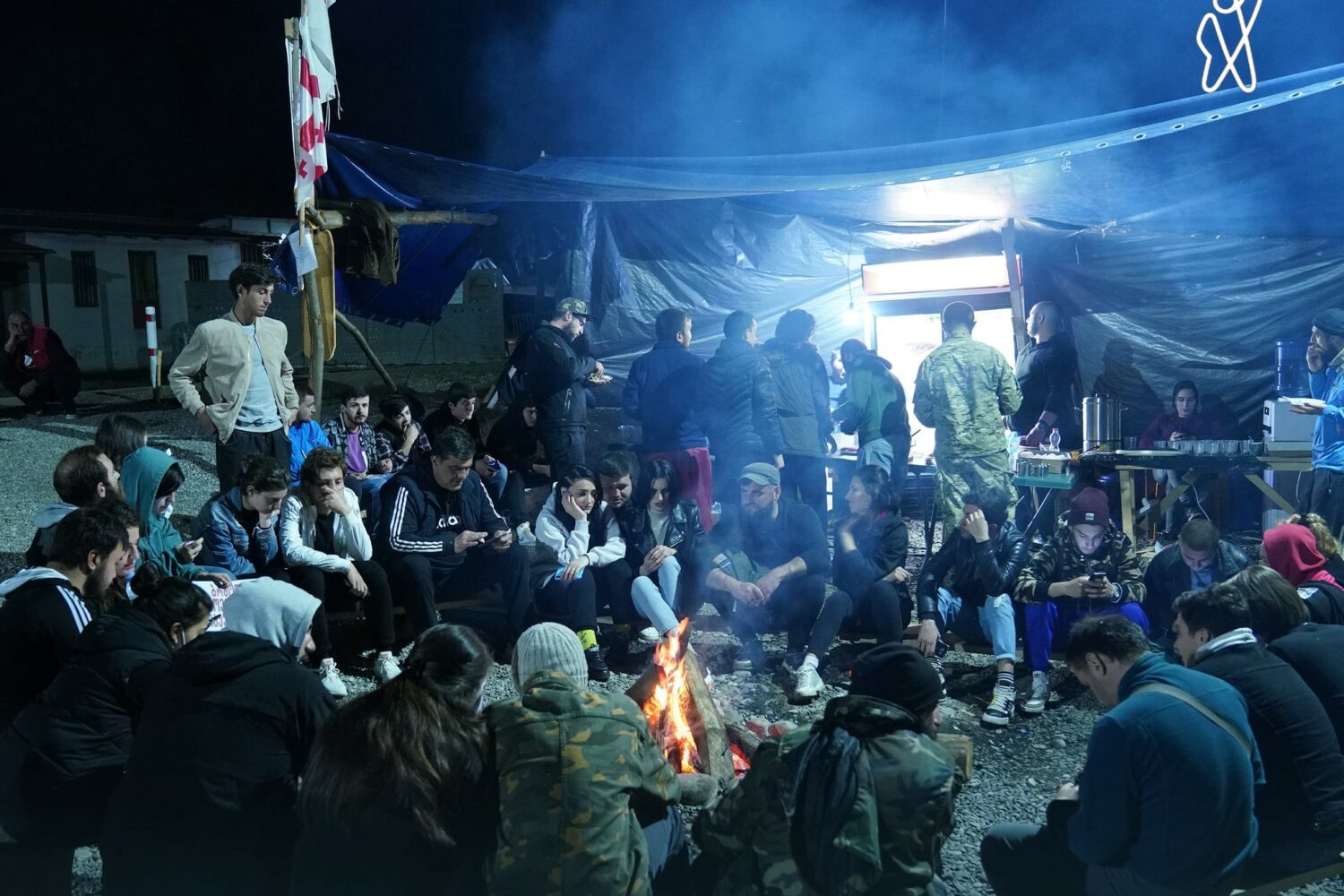 A group calling themselves the “Rioni Gorge guards” have been protesting against the construction of the Namakhvani Hydro Power Plant (HPP) for more than six months. The state did not communicate with the locals until the first large-scale demonstration was held in Kutaisi, which ended in vain, and the protestors’ questions remained unanswered from the authorities. In fact, the government resorted to violence to end the unrest, and dismantled the protest tents in response to the failed negotiations. Due to the deadlocked negotiations, the involvement of the EU Energy Union in the mediation process has become necessary. How can the attitude of the state towards the protest against Namakhvani HPP  be described, and what parallels can be drawn with other social protests? By answering these questions, this blog post explains in which case the social protest attracts the attention of the government.

What caused the public dissatisfaction regarding the construction of the Namakhvani HPP project?

The construction of hydro power plants (HPP) in Georgia has repeatedly become a reason for public protests and unrest due to social, cultural, environmental, and security risks, which may be accompanied by the construction of large Hydro Power Plants. In the case of the Namakhvani HPP, along with the aforementioned possible threats, the deficiencies in the contract is one of the main challenges, which called the prospect of Georgia’s energy independence into question. According to the agreement signed with the  Enka company, the state will be able to acquire energy independence but at the cost of suffering economic losses. Significant public outrage was caused by the fact that the company is not obliged to sell electricity to Georgia after  15 years. Consequently, questions have arisen among locals, specialists, and the general public as to why it might be worthwhile for a state to launch a similar project if state interests are not taken into account. There is an impression that the government either does not have the answers to the questions or does not want to explain the terms of the contract to the public as they may be in an unfavorable situation, both electorally and legally. However, this protest cannot be ignored in the same way that other social protests were because its scale is significantly larger.

What caused the strong spark of protest in the peripheries?

In the case of Namakhvani, public protests were mobilized in the region, which itself is an unprecedented case due to the fact that in Georgia, waves of protests usually start from the capital, or other major cities. However, it should be noted that large-scale political rallies in Tbilisi are mobilized mainly thanks to the supporters brought from the regions. The widespread civil support for the protests against the Namakhvan HPP may also be because the Rioni Gorge guards have used social media and the internet quite effectively. In addition, they held information meetings with the population in various municipalities, which may also have helped them to mobilize people in the regions.

Enka, a company operating at the Namakhvani HPP, has launched a counter-information social media campaign dubbed “Myths vs Facts”, which has fallen in parallel with a month of preparations for a large-scale protest rally in Tbilisi. Moreover, in the run-up to the rally in the capital, information levers were used against protest leaders, in an attempt to use the protest for narrow political interests and associate “Rioni defenders” with ultranationalist forces, which may have had some impact on the population in Tbilisi. The spark in Tbilisi was not as strong as the rally organizers expected. However, the Namakhvani protest brought together groups with completely different worldviews and interests.

What led to the consolidation of different interest groups around the protest?

Mass mobilization in Georgia is not motivated by a simple expression of solidarity, but most often on the grounds of offending dignity and religious feelings, or alleged violations of national identity and territorial integrity. The Namakhvani protest is a mixture of all the above, which caused the issue to become a subject of high public interest.

Various social groups around the community saw some issues aligned with their own interests in addition to those of the citizens participating in the rally. In particular, green activists pointed towards environmental problems, leftists drew attention to social and legal challenges, liberals underlined legal and state challenges, while ultranationalists focused on pseudo-patriotic, chauvinist concerns, and Turkophobia. This protest brought them all together, which was an unprecedented event. However, the gathering of different interest groups in one space did create some inconvenience for the Rioni Gorge guards; indeed, the concerns of the various political groups superseded their initial intent to show solidarity with the local organizers of the rally.  As a result, the protest organizers  had to be in their righteous mode about whose support did they want or who they would stand by.

Does the government act uniformly during all social protests?

Parallels to the protest of Shukruti community:

To emphasize the uniqueness of the movement against the Namakhvani HPP, it is important to analyze the government’s actions in comparison with other protests. In parallel with the protest against the Namakhvani HPP, the residents of the village of Shukruti in Chiatura sewed up their lips in protest of the damage to their homes and the destruction of their farmland due to ore mining by the Georgian Manganese company. They have been protesting more than a month. The protest moved in front of the US Embassy in Tbilisi, where they have been spending nights in cars. Neither a large part of the public is informed about their protest, nor do they have as much support as the Rioni defenders, nor is there any response from the state. The locals from Shukruti are being ignored, which is  why they are consistently protesting in front of the embassy of another  state, trying to get the authorities’ attention in order to assess their situation in a timely manner, as well as force Georgian Manganese to pay damages before their home area is completely destroyed and they end up on the streets.

Several important factors need to be considered while drawing such a parallel; first and foremost, the residents of the village of Shukruti do not use the information field as effectively as the Rioni Defenders do. In addition to the lack of public awareness on the issue, the issue itself is perceived as a private matter and not a public problem: therefore the level of solidarity is low. Furthermore, an interesting trend has emerged in that during local protests, people try to gain support not only from their fellow citizens but also from international allies, and thus draw the attention of the state. As a clear example, several MEPs expressed their support towards the protestors of Namakhvani HPP in their official statements, the information about the protest has been provided by Georgian Greens. In addition, in their own responses to the issue, the US and EU Ambassadors to Georgia called on the government to engage in dialogue with the opposing side and welcomed the involvement of the EU Energy Union in the mediation process. This fact is further proof that negotiations within the country have become almost impossible without the involvement of external actors. The precedent for this came in the form of the involvement of the President of the European Council in mediation efforts to overcome the recent political crisis in the country, which seemed to create a feeling in the society that without international actors, domestic problems cannot not be solved. The lack of communication between the government and the people with the emergence of the need to launch an international mediation mechanism to resolve all important issues damages the sovereignty of the state and its international image.

Parallels with the protest of Chiatura miners:

On other occasions, state officials have arrived at the scene during a social protest and the issue has been resolved by consensus. For example, one of the incidents took place in 2019, when miners protesting in Chiatura demanded the protection of labor rights and pay increases. A two-hour meeting between the miners and representatives of the Georgian Manganese administration ended with a 35% increase in salaries with the involvement of representatives of a government team. Several important factors have emerged that differ this social protest from the Namakhvani case. Perhaps most notably is the fact that during the strikes of the Chiatura miners, support for their cause was mainly expressed by locals, as well as miners from Tkibuli and left-wing activists. Although the media was quite active in covering the protest, it was still not possible to mobilize large-scale nationwide protests on the ground, and the protests were largely local. If  parallels with the Namakhvani protest are drawn, the national level of coverage for this case is evident , as well as the diversity of protestors in terms of their interests, social affiliation, and other characteristics.

What is the government’s communication strategy during various social protests?

As for the desire of the state to engage in negotiations, or to restrain itself, the example of Chiatura proves that when the state is not involved in the process, the government prefers to act as a mediator, as when the government tried to settle the situation between the workers and the company in Chiatura and thus gain the sympathy of the voters.   The protest of the Shukruti population, though, was not worthy of the state’s attention, perhaps because their protest could not become particularly interesting to any group in society. As for solving the problem around the Namakhvani HPP, it appeared to be a state issue, and perhaps that is why they cut off direct communication with the protestors, which eventually led again to the launch of an international mediation mechanism by the state. The involvement of the EU Energy Community in mediation efforts has reaffirmed that internal negotiations, whether social, political, economic or legal, cannot be achieved without the intervention of an external mediator in the process.

Attitudes towards social protests in Georgia in general are selective, both on the part of the public and the state. Certain groups in society do not show solidarity with certain social protests until the issue is in their best interests. At the same time, the protest against the Namakhvani HPP is a unique example of gathering different interest groups in one space and uniting people with a high level of civil consciousness in the periphery around the protest. As for the government, its representatives pay attention to the issue only if it becomes a matter of national concern and interest of international actors, and even in such case it can often be unsolved without the mediation of international partners.