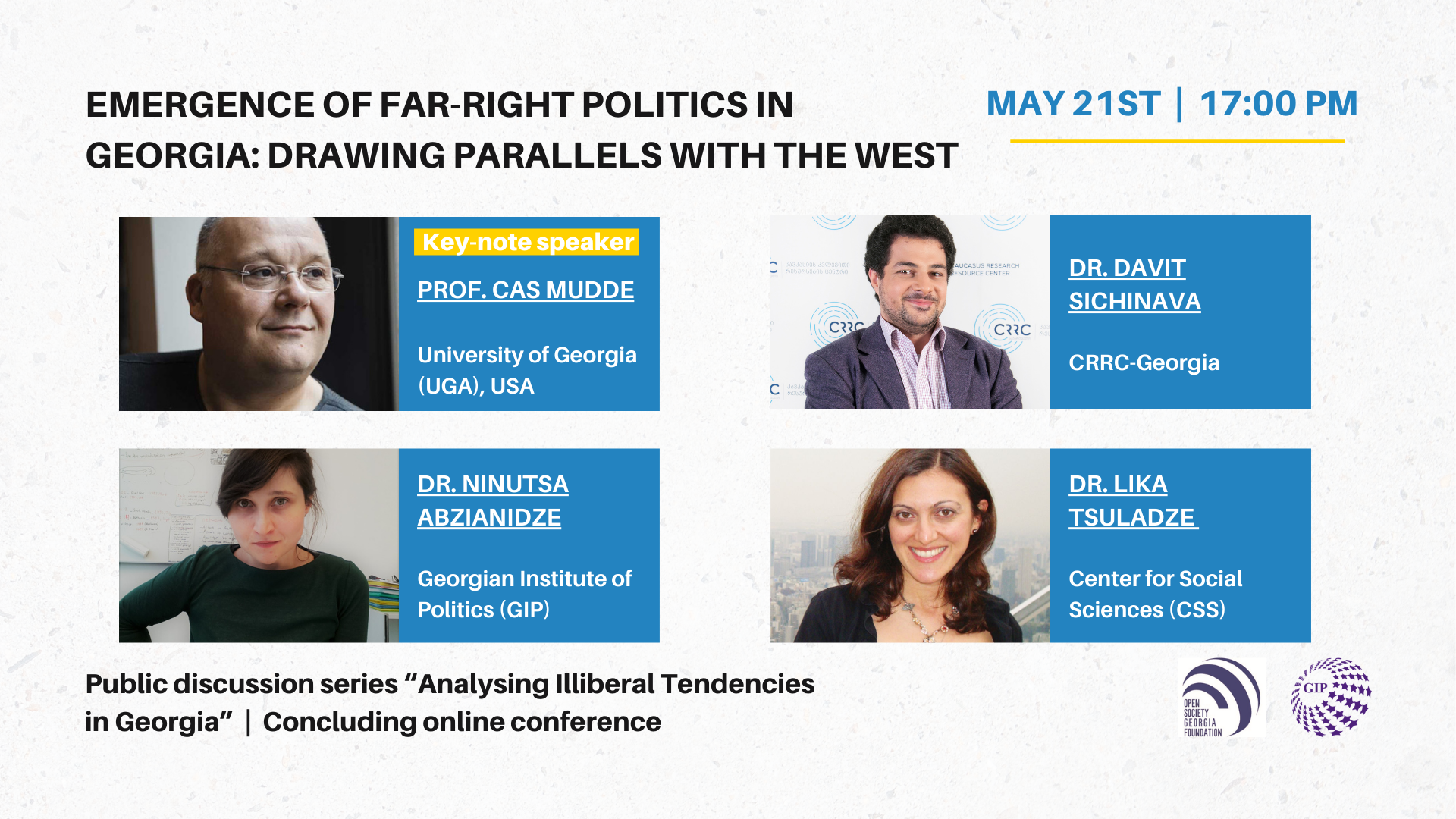 Concluding conference: Emergence of far-right politics in Georgia: drawing parallels with the West

On May 21st, at 17:00pm Georgian Institute of Politics (GIP) organizes an online conference. This is a concluding event under the framework of the project “Exposing the Roots of Illiberalism in Georgia” financially supported by the Open Society Georgian Foundation (OSGF). The project aims at revealing the factors causing the emergence of far-right radicalization and analysing the key patterns of illiberal tendencies and movements in Georgia.
The event will take place via the ZOOM in Georgian and English languages. Please register here in advance >>
For a few years now, the rise of far-right nationalism has been identified as one of the main challenges to democracies worldwide. While they are not new for Georgia, the extreme right-wing movements have become especially active in the country over the past three years. Georgian right-wing populist parties and movements are picking up basic arguments against liberalism that are similar to those being used by right-wing populist parties across the West. While far right groups in Georgia remain rather marginal so far, the potential for them to gain momentum is vividly present.
The purpose of the concluding conference is to discuss whether and in what form far-right actors create threat for liberal democracy in the Western European countries and what are the patterns in Georgian in this regard.
Key-note speech: Increase of the far-right profile in Europe: threat to liberal democracy
The first part of the conference will focus on the new political reality in the modern world, causes of far-right emergence and that of the mainstreaming and normalization of far-right political players and their ideology.
The conference will start with the first key-note speech by Professor Cas Mudde, Dutch political scientist whose research focuses on political extremism and populism in Europe and the United States. His research interests include the areas of political parties, extremism, democracy, civil society and European politics. At this conference, the Georgian audience will have an honor to listen to his short lecture about how the far-right politics dominate in modern Europe and what are the causes of the far-right emergence. Prof. Mudde will also talk about the prospects of the radical right-wing movements in Europe, the impact that their actions might have on liberal democracy as well as the perspectives of the far-right groups and political actors in the West. He will also discuss the common strategies of the right-wing populist actors and anti-democratic tendencies of the ultranationalists in Europe.
Panel discussion: How the far-right groups instrumentalize mainstream media and social networks in Georgia
In the panel discussion of the conference, the Georgian researchers and experts will provide brief overviews of the far-right groups’ impact on the democratization process in Georgia. The panel will focus on the analysis of the Georgian mainstream and social media, as these are the most convenient tools for the far-right groups to spread their messages, narratives and by that gain support.
The first speaker of the panel will be Dr. Nino Abzianidze, Associated Professor at the Gerogian Institute of Public Affairs and a communications coordinator at GIP. Nino has worked as a postdoctoral researcher at the Departments of Political Science at the University of Copenhagen, Denmark, and the Central European University in Budapest. She will present the key findings of her working paper “Media coverage of the ultranationalist groups in Georgia: mapping the structure of the discourse” published under the framework of this project. In her speech, she will distinguish the patterns of media coverage of Georgian ultranationalist groups and their discourse as covered by the three Georgian mainstream TV channels: Rustavi2, Imedi TV, and the 1st Channel of the Georgian Public Broadcaster. She will explain whether and how much the ultranationalist narratives penetrate media discourse in Georgia, whether the media gives space to the counter arguments to ultra-nationalism, and who are the actors who set the discursive agenda around these issues.
The second local speaker will be Dr. David Sichinava, Research Director at CRRC-Georgia. He is an assistant professor at Tbilisi State University and teaches introductory and advanced research methods classes. At this event, Mr. Sichinava will talk about the results of the study that CRRC Georgia published regarding the narratives of the Georgian far-right groups spread in social media in Georgian language. He will emphasise the anti-liberal rhetoric of the far-right groups and discuss how pro-Russian their message-box is in reality.
The discussant of this panel will be Dr. Lia Tsuladze, Associate Professor of Sociology, Faculty of Social and Political Sciences, Tbilisi State University; Executive Director of the Center for Social Sciences (CSS). Ms. Tsuladze will summarise the two presentations, critically comment on them and present her views regarding the role of media and social media as an instrument for spreading the far-right narratives.
The participants of the concluding conference will be Georgian and international scholars, experts, students and other stakeholders, who will have an opportunity to ask questions after finishing the speeches in two rounds of Q&A format.
PROGRAM

17:15-17:30 – Key-note speech: Mainstreaming and normalization of far-right political players and their ideology in Europe

18:15-18:30 – Media coverage of the ultranationalist groups in Georgia: mapping the structure of the discourse