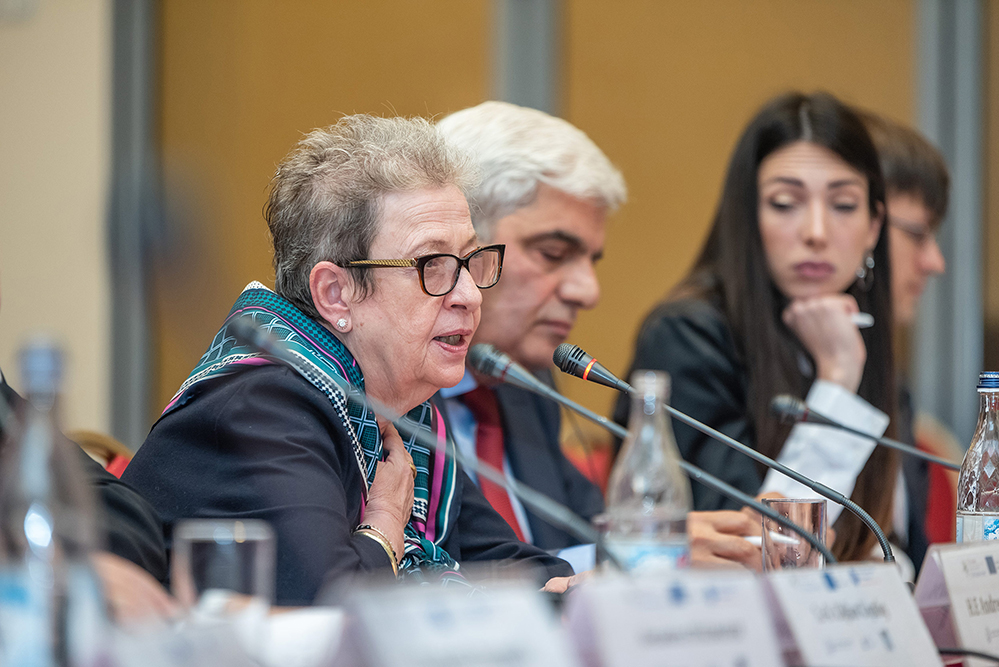 The concluding conference for the “Facilitating Effective Visa Liberalization in Georgia, Moldova and Armenia through Experience Sharing” was held in Yerevan, Armenia on October 25 at the Ani Plaza Hotel. The event was organized by the Georgian Institute of Politics (GIP, Georgia), the Analytical Centre on Globalization and Regional Cooperation (ACGRC, Armenia) and the Institute for European Policies and Reforms (IPRE, Moldova).

Georgian, Moldovan and Armenian policy papers, written under the framework of the project, were presented at the conference. Speakers also shared recommendations, based on Georgian and Moldovan experiences, with civil society representatives, politicians, public officials, journalists, academics, and expert community members who attended the event. The goal of the conference was to support the enactment of the visa liberalization mechanism in Armenia through the effective assessment of the benefits and challenges, based on consistent and visibility-based advocacy and experience sharing.

The interest in this conference was incredibly high and the official guests from diplomatic missions based in Armenia as well as from government agencies were well represented. The conference moderator was Ms. Alexandra Stiglmayer who presented the organizers of the project to the audience. The manager of the project, Ms. Salome Kandelaki, presented the goals and objectives of the project and the project’s implementing partners, Mr. Stepan Grigoryan and Mr. Iulian Rusu, made the opening remarks.

One of the key-note speakers of the conference H.E Andrea Wiktorin, Ambassador Extraordinary and Plenipotentiary, Head of Delegation of the European Union to Armenia, stressed the importance of implementing reforms in the healthcare sector, judiciary system and the education sector. The ambassador also outlined the need for info-campaigns, which should be run by civil society actors with the financial support of the EU, to raise awareness about the benefits of a visa free regime with EU. She noted that Armenia already faces challenges in terms of irregular migration, as do Georgia and Moldova—two countries have “serious” challenges regarding the Visa Free regime and that “serious” reforms need to be fulfilled by the respective countries. However, she also mentioned that these countries, including Armenia, are cooperating with the EU on the issue, which is a positive trend.  Mr. Avet Adonts, Deputy Minister of Foreign Affairs of the Republic of Armenia, underlined the importance of the conference topic since Armenia is moving toward the EU, a goal that is clearly underscored in the country’s foreign policy. He remarked that the EU is one of the most important political and economic partners of Armenia and that the country is doing  its best to adopt the laws and regulations necessary to establish a close bilateral partnership with the EU. The head of the EU Delegation, H.E Andrea Wiktorin, responded by suggesting that speakers at the conference should avoid discussing individual countries because it could be counter-productive to the event’s goals. She recalled the words of Jean-Claude Juncker who previously mentioned that Armenia is technically ready for the visa liberalization dialogue with the EU. She underscored the potential increase of illegal immigration, noting that the people-to-people approach is a vital part of any strategy to overcome the downsides of this process. She also mentioned that Armenia already benefits from many of the features of the EU Mobility Partnership, and that practice should continue in the future to support academic and student exchange programs.  Mr. Arman Yeghoyan, MP, Chairman of the Standing Committee on European Integration, National Assembly of the Republic of Armenia, agreed with the EU Ambassador and additionally suggested not to link the People-to- People Partnership with the refugee crisis and the problem of asylum seekers from the associated states. He also mentioned that it is obvious that the number of the asylum seekers will increase after Armenian receives the EU visa free regime but it will gradually decrease. He emphasized on the fact that, under the Visa Facilitation mechanism, the number of the asylum seekers from Armenia decreased from 2016 to 2017. Ms. Haykanush Chobanyan, Head of Return and Reintegration Division, Migration Service, Ministry of Territorial Administration and Infrastructure of the Republic of Armenia, confirmed that the number of asylum seekers is decreasing. She also presented the statistical figures on the trend.

The second part of the conference was dedicated to the presentation of policy papers. The first policy paper was about “Mapping Georgia’s Visa Free Progress: Quest for Preventive Strategy” presented by Ms. Tatia Dolidze. She spoke about the Georgian context and touched upon acute challenges, including the growing number of Georgian asylum seekers in the EU member states and organized crime operating in various parts of the EU. She also discussed positive steps taken by the relevant governmental agencies to make readmission and border management mechanisms more effective. Ms. Tatia Dolidze also touched on the reforms and laws that the Georgian government has adopted in compliance with the EU requirements. Next Mr. Iulian Rusu presented his paper,  “Five years of EU-Moldova visa free travel”. He spoke about the Moldovan perspective of the process and addressed problems related to the border management, asylum seekers and money laundering. Mr. Iulian Rusu also noted that the Moldovan government has generally complied with requests for the readmission of Moldovan citizens and third country nationals and that Moldovan state-issued documents comply with the International Civil Aviation Organization (ICAO) security standards.

Mr. Stepan Grigoryan followed with a presentation of his paper, “EU-Armenia Relations in the Framework of the Visa Facilitation and Liberalization.” He outlined the key findings of his research and talked generally on the prospective of Armenia in terms of receiving visa free travel with the EU. He pointed out that the EU faces a high risk of irregular migration from Armenia. However, he also highlighted the Armenian authorities’ key achievements, such as the EU-Armenian cooperation in sectors of mobility and border management and the ratification of the 2014 Visa Facilitation and Readmission Agreements.

As a follow up of the paper presentations, the Georgian and Moldovan researchers Mr. Iulian Rusu and Ms. Tatia Dolidze presented their joint recommendations to Armenian side in support of intensifying and simplifying visa liberalization dialogue between EU and Armenia. The aim of the recommendations was to show the positive aspects of the visa liberalization process as experienced by Georgia and Moldova as well as to share information about addressing the problems that exist in both countries and create obstacles for effective integration. Mr. Iulian Rusu raised the recommendations regarding the Governmental Task Force for the Visa Liberalization with the EU, submitting the preliminary assessment to the European Commission and also touched on the importance of the integrity and the asset recovery. Ms. Tatia Dolidze mostly discussed recommendations concerning the visibility of the reforms, transparency and involving non-governmental sector in the visa facilitation dialogue. She touched on lobbying the EU and improving communication with the wider public. After presenting the recommendations, the audience actively participated in the question-answer session. Two rounds of discussion were held regarding the preventive measures Armenia could adopt to avoid repeating the problems Moldova and Georgia faced after receiving the visa free mechanism, as well as the general importance of the visa free dialogues between the EU and Armenia. Ms. Alexandra Stiglmayer and Mr. Stepan Grigoryan made the concluding remarks and expressed their hope that the visa liberalization dialogue would intensify in the nearest future.

The project, within the framework of which the conference took place, benefits from support through the EaP Civil Society Forum Re-granting Scheme (FSTP) and is funded by the European Union as part of its support to civil society in the region. Within its Re-granting Scheme, the Eastern Partnership Civil Society Forum (EaP CSF) supports projects of its members that contribute to achieving the mission and objectives of the Forum. The project is also co-financed by the National Endowment for Democracy (NED). 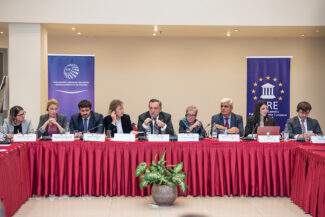 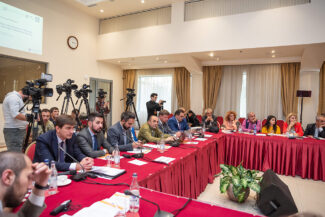 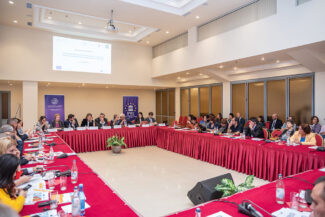