Home Events Germany 2009-2017: Images of an Uncertain Power and its Implications for Georgia 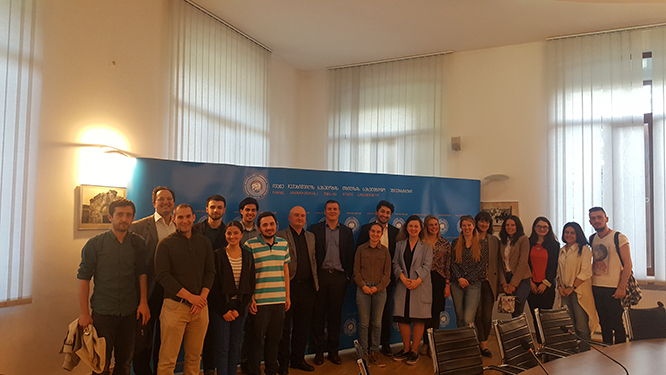 Germany 2009-2017: Images of an Uncertain Power and its Implications for Georgia

Georgia’s Euro-Atlantic integration is a two-sided process, one that depends both on successful domestic reform and the policies of its European partners. Germany is one partner upon which Georgia’s European future partly depends. On 22 May 2017, the Georgian Institute of Politics with support of the Open Society Georgia Foundation (OSGF) hosted the public discussion, “Germany 2009-2017: Images of an Uncertain Power and its Implications for Georgia.” The discussion featured a talk by Dr. André Härtel, who presented competing German foreign policy discourses and discussed how they relate to Georgia. He provided an analysis of Germany’s handling of three international crises during the past decade: the Euro Crisis, the Refugee Crisis, and the Ukraine-Russia Conflict.

Dr. Härtel presented two images and policy-making styles that have characterized Germany in recent history: Germany as an “integrated civil power” emphasizing multilateralism; and Germany as a “hegemonic central power” emphasizing unilateralism and pragmatic integration. The country’s response to recent crises has demonstrated both approaches, which sometimes overlap.

In the European Neighborhood Policy and in Georgia more specifically, German diplomacy has been hampered by the lack of a geopolitical vision. This has turned the states between the EU and Russia into a “gray zone” without clearly-articulated futures. However, Germany has proven adaptable, especially with regard to the Ukraine-Russia Conflict, using its hegemony within the EU to anchor sanctions against Russia in a multilateral European framework.