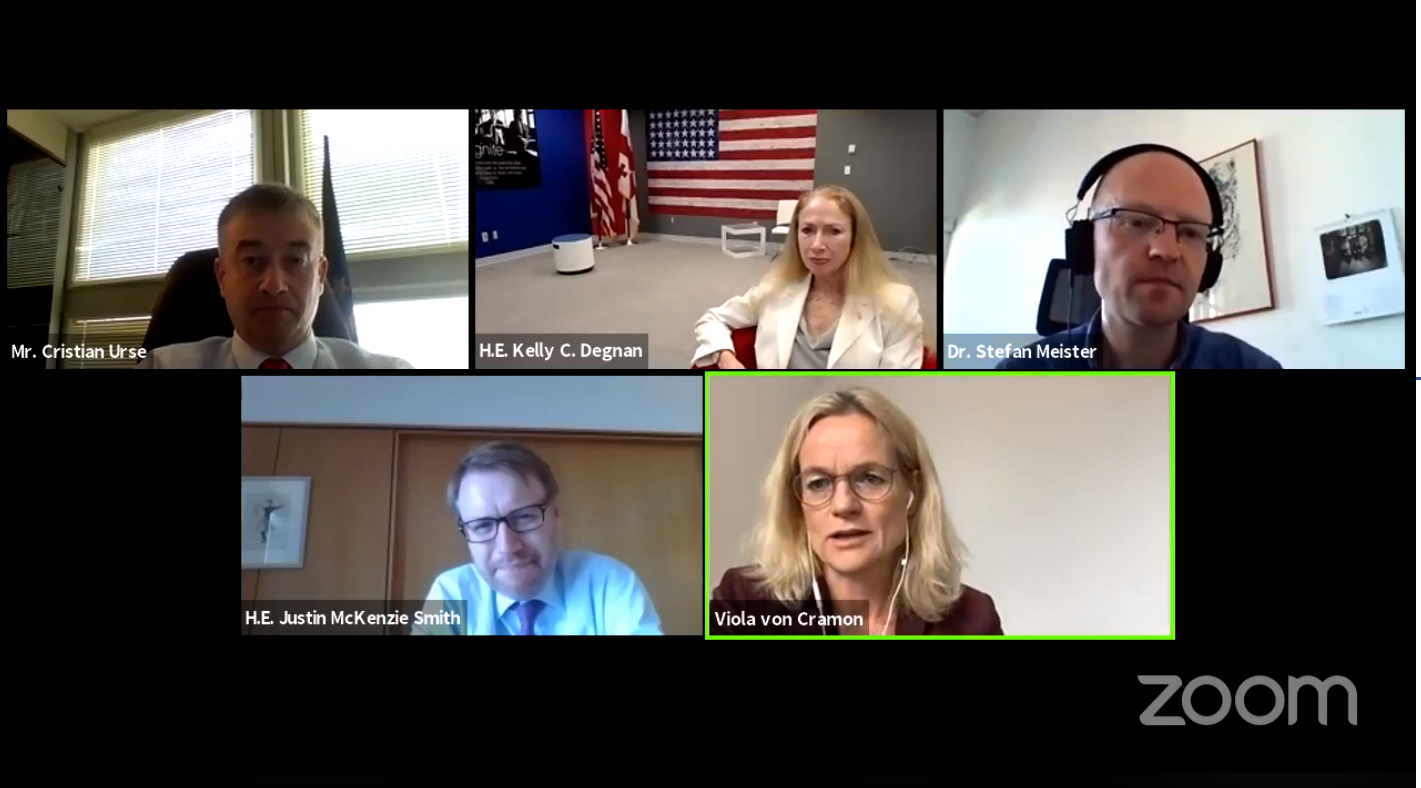 On July 1, 2020, Georgian Institute of Politics (GIP) hosted 2nd panel of the 5th Edition of the annual Democracy Conference #GEODEM. The main theme of the panel was International actors and election. The 2020 edition of the GIP’s annual conference revolves around the issue of Elections in Times of the COVID-19 Pandemic: A New Challenge for Georgia’s Uncertain Democracy?  The conference, held this year via the online platform ZOOM is traditionally organized with the financial support of the National Endowment for Democracy (NED).

The panel mainly focused on international dimension of Georgia’s democratization process, specifically the role of the West, in the upcoming parliamentary elections. The following questions were addressed:

The panel, moderated by Dr. Stefan Meister, Head of the Heinrich Boell Foundation Tbilisi Office – South Caucasus, was opened by Prof. Kornely Kakachia, Director of GIP, and the speakers were:

The first speaker was H.E. Kelly C. Degnan, Ambassador of the United States of America to Georgia. At the beginning of her speech, she reaffirmed the United States’ support to Georgia in achievement of its goal – a strong democracy. She pointed out that a strong democracy is what stimulates the country’s economic development, prosperity and stability. The US Ambassador also positively assessed the election-related constitutional amendment adopted on June 29.

H.E. Kelly C. Degnan stated that the United States is proud of its partnership with Georgia and emphasized four key areas in which the United States supports Georgia’s democratic development. According to her, the United States is a committed partner of Georgia in development, security, has the role of neutral arbiter and, at the same time, is an objective evaluator as well. She also highlighted the special role of other international actors and local non-governmental sector, media and civil society. As she noted, in terms of development, the United States assists Georgia in identifying priority areas for the country and developing necessary strategies to achieve the set results. As an example she mentioned USAID’s financial support, by means of which the USA assists Georgia in improvement of education system. She also mentioned the rule of law, strengthening of civil society, political parties, and the improvement of political education in society. The second area she emphasized, is security, in which Georgia is a very important partner of the United States. The Ambassador noted that, in general, the sound security system provides opportunities to deal with economic and financial challenges. According to her, the strategic cooperation between the two countries and the resources that the United States allocates to Georgia are important in terms of security. She also focused on Georgia’s role in protecting international security. The third area, in which she sees a special role of the United States is the role of the neutral arbiter. The United States can play the role of unbiased evaluator of Georgia’s progress. However, the US is not the only such actor. Other international actors are also providing interesting feedback to the state. At the end of her speech, the Ambassador also drew the attention of audience to the role of international actors, as mediators in negotiations between the parties. According to her, such role is especially important for the strongly polarized political environment.

The second speaker of the conference was H.E. Justin McKenzie Smith, Ambassador of the United Kingdom to Georgia, who spoke about the role of the international community during the elections. At the very beginning, he referred to the parliamentary model of the First Republic of Georgia in 1919 and drew attention to the fact that five women MPs had been elected to parliament of that time. Based on his observations, at that time the state of Georgia itself played a big role and managed to make changes. During elections in 1991, the international community played quite significant role. He chronologically reviewed the major changes, taken place in Georgia over recent 30 years and called the constitutional amendments of Monday, June 29, 2020, historic. The Ambassador attributed this success first of all to the efforts of Georgian people and also thanked the international facilitators, some of whom were speakers at the same panel. At the same time, he expressed hope that in the future, the role of the international community in Georgia will be even less prevalent.

From the Ambassador’s point of view, when it comes to elections, the old saying “practice makes perfect”, does not apply. Based on the experience of various countries, it is necessary to consider and follow the new recommendations during each election. Elections are, in fact, the protection of the democratic foundation that is already formed by the society. In another area where the international community can work, he called reforms and marked out public administration reform among them, calling the public sector the backbone of the state. Justin McKenzie Smith also emphasized the need for media objectivity and critical importance to make authentic information available to the public.

The next speaker on the panel was Viola von Cramon, Member of the European Parliament and representative of the Alliance ‘90/The Greens. Ms. Cramon noted that the Parliament of Georgia is always ready to cooperate with the European Commission and the European Parliament. She accentuated that in terms of the quality of cooperation, the Parliament of Georgia is distinguished in the region. In addition, she used her visit to Ukraine in 2010-12 as an example, where she witnessed how they talked about ongoing reforms in Georgia, whether public administration or patrol police reform, which was carried out in a unique way in this region. Ultimately, Ukraine took the Georgian Patrol Reform model as an example, which the speaker proudly noted, explaining that it is a very good practice to share best practices between countries. She paid special attention to the constitutional amendment adopted before the 2020 elections, and rated it positively. However, she added that unfortunately not all opposition parties took advantage of this opportunity and did not take part in supporting this change. She explained that international partners can only make recommendations, and the final decision depends only on the Georgian parliament, government and Georgian politicians in general.

Cristian Urse also spoke about the decision made by the Parliament of Georgia on June 29, and positively assessed the election reform. The idea that Georgia should move to the proportional electoral system has been there for a while, and the recommendations in documents of the Council of Europe are already visible in 2008. He stressed the duration and complexity of the process of these changes and expressed satisfaction that implementation of partial proportional electoral system will be possible as a result of the June 29 decision. He said it is a fact that the discussion took place between the parties and it is also a fact that this discussion will continue. In conclusion, he stressed the need to ensure that the political climate allows for equality and pluralism during the elections.

After completion of speeches, the audience asked interesting questions about the guarantees for safe conduction of elections, threats of external interference and the mechanisms of election observation, to which the speakers responded within their competence. Overall, the second panel of the conference was attended by more than 100 people.

The third panel of the conference, also via the online platform ZOOM, will be held on July 14th on the topic – POLARIZATION AND RADICALIZATION OF THE ELECTORATE.

Detailed information about the third panel will be published soon. Follow our website and social media platforms to stay updated!

GIP will publish more detailed information about all three panels of conference in summarizing report after completion of the conference.