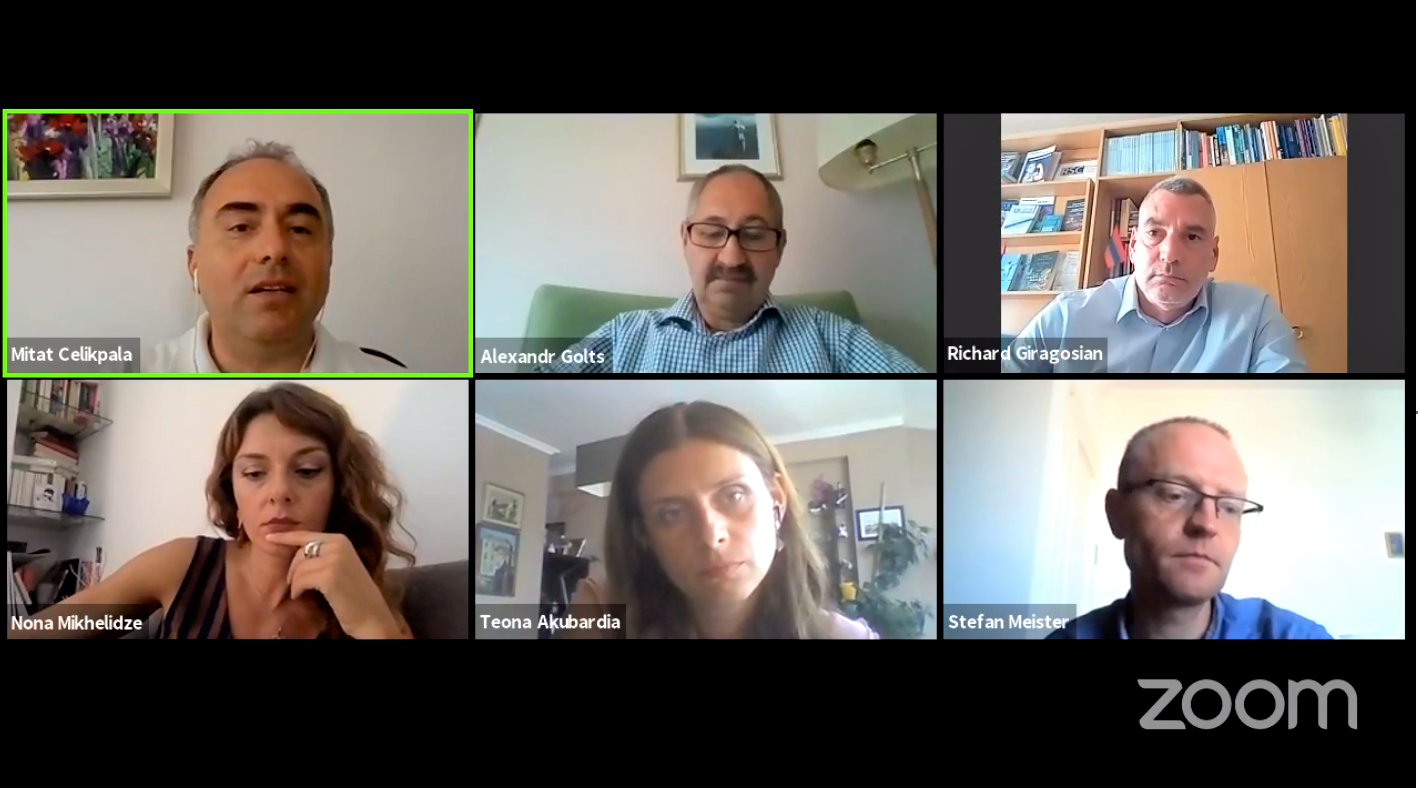 The event was moderated by Richard Giragosian, Founding Director of the Regional Studies Center (RSC), an independent think-tank located in Yerevan, Armenia.

Opening remarks were delivered by Dr. Stefan Meister, Head of the Heinrich Boell Foundation Tbilisi Office – South Caucasus Region, who emphasized the importance of the project for South Caucasus countries and welcomed the speakers and audience. Dr. Meister pointed out that the project strengthens research on key regional actors and aims at improving the expertise and quality of discussion regarding foreign policy issues.

The first speech was delivered by Dr. Nona Mikhelidze, Head of the Eastern Europe and Eurasia programme at the Istituto Affari Internazionali (IAI) in Rome. Dr. Mikhelidze provided European perspectives on Turkey’s importance in the region. She drew attention to the role of Turkey as a NATO member in the region and discussed how Turkey can mitigate security challenges of South Caucasus countries. Dr. Mikhelidze pointed out that the drivers of Turkey’s approach are connected with Turkey’s relations with NATO, US, EU and Russia. She also underlined Turkey’s dependence on Russia and the “Cold shower” from the EU and the US as important shaping factors.

The second speaker – Dr. Mitat Celikpala, Professor at Department of International Relations at Kadir Has University addressed the issue of Turkey’s approach to the region and analyzed the prospects of Turkey-Armenia normalization and its potential impact on security of South Caucasus. Dr. Celikpala underlined the complex and expanding nature of Turkish foreign and security policy in recent years. He argued that despite some recent fluctuations, Turkey still has a Western “mindset” but much more balanced one. Turkey as a NATO member country assists Azerbaijan and Georgia to strengthen their military capabilities. Furthermore, Dr. Celikpala pointed out that the prospects of Turkey-Armenia normalization are limited given the incompatible issues as a stumbling block.

The third speech of the discussion was given by Dr. Teona Akubardia, Associate Professor at Open University Georgia. She discussed the implications of Turkey’s pragmatic relations with Russia on the security of the region. Dr. Akubardia pointed out that a new phase of pragmatic relations between Russia and Turkey started in 2015, after the crisis in Syria. However, the main driver of Turkey’s approach to the region remains the same, that is energy interests. Dr. Akubardia also underlined the importance of Turkey’s support for Georgia’s North Atlantic aspirations.

The fourth speech of the online discussion was deliver by Aleksandr Golts, Independent Military Journalist. Mr Golts drew attention to the Russian military build-up in the Black Sea region and discussed its impact on Turkey, Georgia and the regional security architecture. Mr. Golts pointed out that one of the most important factor explaining the Russian military presence in the Black Sea region is Russia’s fear about the US military forces and the missile defense base deployed in Romania. What Russia does, according to the speaker, is a preparation for a big confrontation with NATO and the US. As for the Armenia-Azerbaijan conflict, Mr. Golts argued that a large scale confrontation between the two countries would be a nightmare for Russia as it would force Russia to choose one side and this contradicts its current policy.

After the panelists’ speeches, event attendees were able to ask questions using the Q&A function of the ZOOM platform. The summaries of these questions were delivered to the panelists. There were two rounds of questions. The questions referred to the drivers of the conflict between Armenia and Azerbaijan, Turkey’s role in Abkhazia, Georgia’s role in solving the South Caucasus conflicts and Armenia’s exclusion from the regional projects. During the second round of the Q&A session, attendees were allowed to use their microphone and ask questions verbally, which stimulated more interactive and fruitful discussion.

The online discussion was held in English and the simultaneous translation in Georgian language was provided.

The event was streamed live on the official Facebook page of GIP.