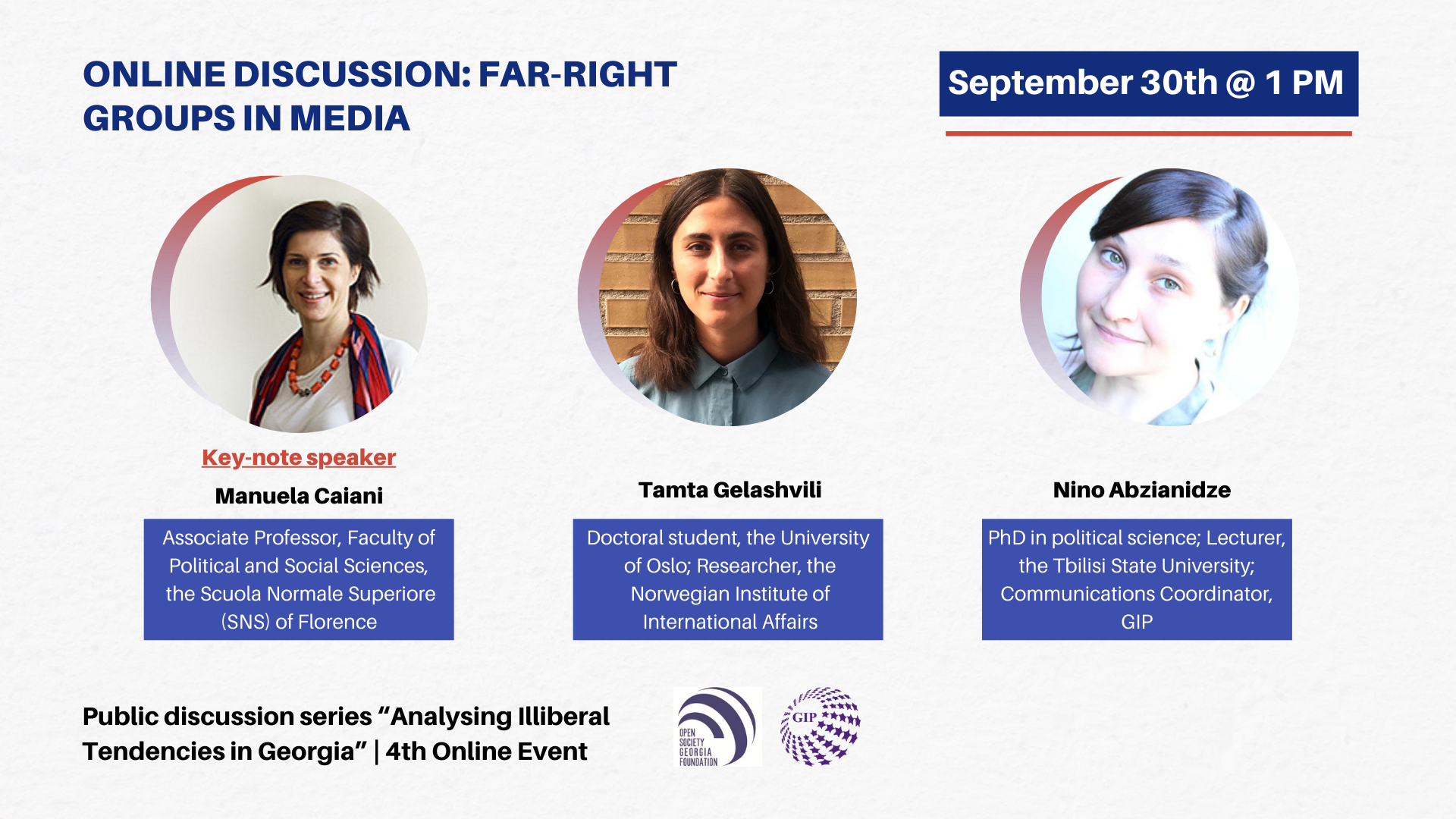 On 30th of September GIP organized a fourth online public discussion “Far-Right Groups in Media”, under the framework of the public discussion series “Analysing Illiberal Tendencies in Georgia”. The discussion series, which is financially supported by the Open Society Georgian Foundation (OSGF), aims at revealing the factors causing the emergence of far-right radicalization in Georgia. The goal of the discussion was to explore whether the media utilize far-right narratives for creating catchy media reports and how illiberal groups manage to attract mainstream media attention. The speakers also discussed whether the media has an agency in legitimizing far-right actors on a political landscape.

The key-note speaker of the event was Prof. Manuela Caiani, an Associate Professor, Faculty of Political and Social Sciences at the Scuola Normale Superiore (SNS) of Florence. In her presentation, Prof. Caiani discussed the interaction between far-right groups and media in Europe and the USA. She presented the analyses of extreme right groups’ activities on social networks. According to her, the internet allows these groups to use online space for initiating collective activities. Based on the network analyses of these activities, her researched revealed that the far-right in Italy is structurally divided. Prof. Caiani referred to them as so-called “brokers”, who might be even harming each other. In the cases of France and Germany, it was revealed that the network of these groups have so-called “star” structure, while in England – the structure is decentralized; In some countries subcultural actors are visible as well, which do not appear on a political scene, but they are still strengthening the consolidation of certain ideology. One of the main findings of her research, which Prof. Caiani highlighted during her presentation, is that more than a half of the far-right groups have transnational networks with other far-right organizations and they are becoming increasingly stronger through those networks.

The second speaker of the event was Tamta Gelashvili, Doctoral student at the University of Oslo and a researcher at the Norwegian Institute of International Affairs. She presented her policy paper “The Far Right Honeytrap: Georgian Media and the Mediagenic Far-Right” published by GIP within the same OSGF project. In her presentation, Tamta Gelashvili discussed the interrelation of the media and far-right in the Georgian context. She also touched upon the potential impacts of media coverage on both public opinion and consolidation of the far-right actors and discussed the possible role Georgian media can play in far-right mobilization.

Tamta Gelashvili highlighted two cases in her speech. The first case was the premiere of the movie “And Then We Danced”, accompanied with the protests by far-right groups, who organized a demonstration in front of the movie theatre. Those groups were voicing violent statements and the protests were intensively covered by Georgian media. The second case was the protests held by the far-right movement “Georgian March” in front of “Rustavi 2”, a private TV broadcaster, where they threw live chickens at the building. According to Tamta Gelashvili, most people follow the ongoing issues through the media. Therefore, it is immensely important how the media covers those issues. Tamta highlighted the issue of the information supply on the one hand, and its consolidation to cover the demand of those far-right groups on the other hand. As an example, she discussed the media coverage of migration and pointed out that in some countries, intensive media coverage of that topic might contribute to political popularization of the far-right groups. However, Tamta Gelashvili also noted that the media experiences from other countries do not directly apply to Georgian reality.

In the second part of her presentation, Tamta Gelashvili listed three main aspects with regard to the interaction between media and far-right groups. First, she pointed out that some far-right groups need media attention more than others because, for example, unlike the Alliance of Patriots of Georgia, they do not possess any political leverage; The second aspect she mentioned was the political attitudes towards those groups, – some far-right actors are on quite good terms with political parties and manage to affect the initiation and formation process of legislation. Last but not least, the third aspect noted related to the fact that the majority of Georgian population primarily gets information from the television. Therefore, the media needs to take that fact into account and avoid making catchy headlines as it might affect the overall attitudes of the Georgian population.

The third and last speaker of the event was Dr. Nino Abzianidze, PhD in political science, lecturer at the Tbilisi State University and Communications Coordinator at GIP. She addressed the issue of journalistic agency in nationalist discourse in a broader perspective. Based on her original research – the nationalist discourse in the Georgian print media across the democratization period of the country (1991-2012) – Dr. Abzianidze analysed whether journalists are mere transmitters or rather agents of the spread of nationalist discourse. According to Dr. Abzianidze, it is important to focus attention on the aforementioned issue as nationalist discourse appears to be one of the main pillars of the far-right groups’ narratives. Dr. Abzianidze presented innovative conceptualization of the nationalist discourse, according to which the latter is considered as a structure consisting of various elements. Exclusive or hostile nationalist content is at the heart of that structure, but that content acquires importance only when it is communicated by a “sender” towards the “target”. Based on the research conducted with the aforementioned conceptual approach and social network analysis methods, it was revealed that the journalists are dominant “senders” of nationalist discourse and that picture stays unchanged even while analysing it in relation to other factors such as different periods of democratization, different governmental regimes, democratization phases, election and non-election periods, and early/late elections.

While presenting theoretical explanations for the aforementioned empirical findings, Dr. Abzianidze focused her attention on two main elements: structure of the media system and agency of the media actors. Relationship between media and political actors in Georgia under the democratization process is characterized by ongoing tentions. However, it should be noted that the media in Georgia does have a space to voice its independent word. As journalism as a profession is not standardized, big portion of journalists in Georgia as well do not have professional education. Consequently, journalists often master their profession at their workplace and are mostly affected by older generation of journalists and their professional practices. As a result, journalist practices change at a very slow pace. In post-Soviet countries, journalists still believe that they have a mission to educate people. However, if in the Soviet Union, journalists considered their mission to educate a “Soviet citizen”, after declaring independence, they believe that their mission is to educate a “national” citizen. Besides, journalists, like other actors, are rational actors and seek to maximize the trust of society toward them. Frequently, in that process, they face the tension between their professional identity and the sense of belonging to the nation. At the same time, the media is quite polarized in Georgia and not sufficiently aware of the scope of its own agency – both positive and negative – in the aforementioned processes.

The online seminar was concluded with the Q&A session. The discussion took place in the online platform Zoom and the simultaneous Georgian-English translation was provided.