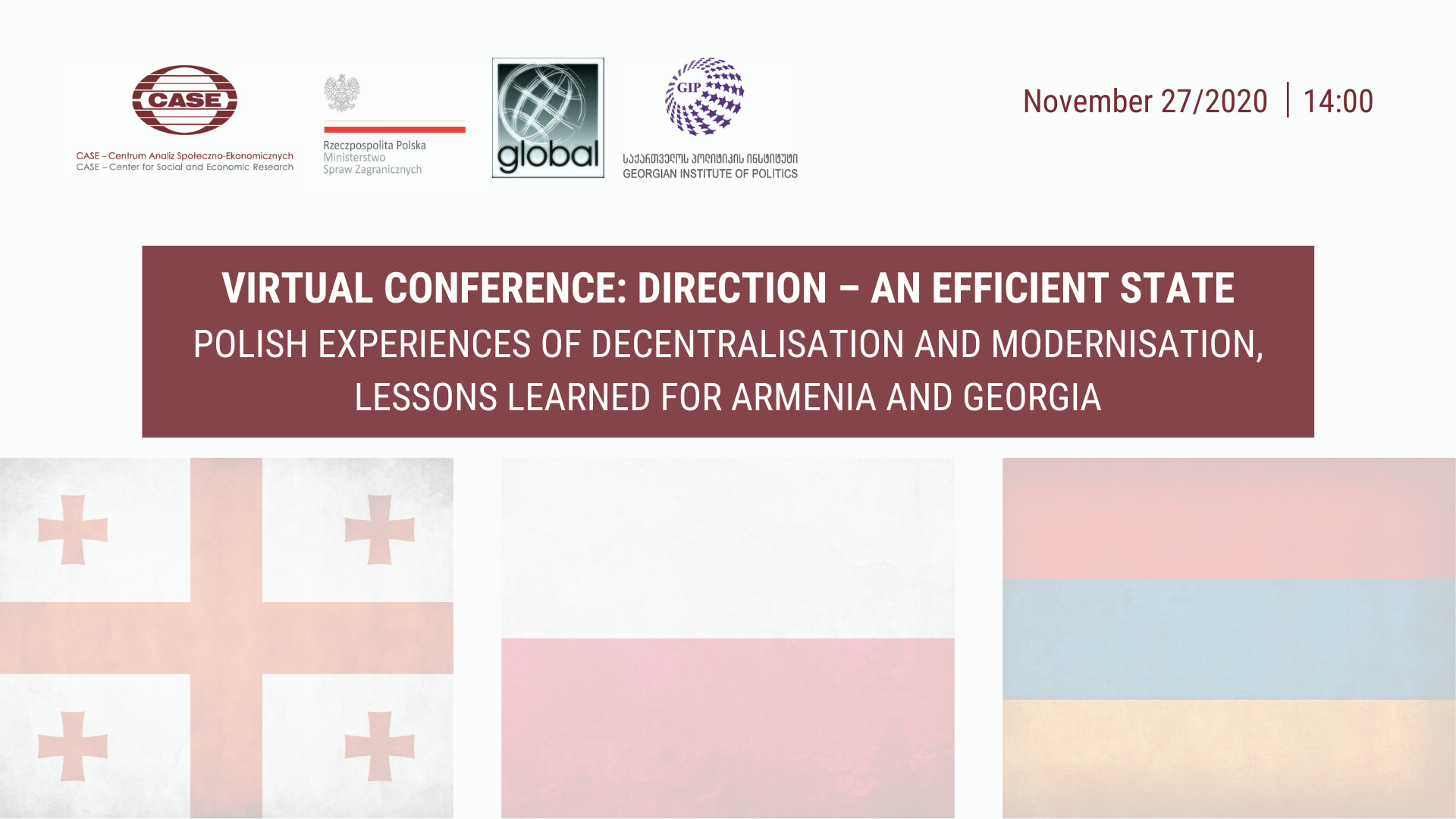 On November 27, 2020, the Georgian Institute of Politics (GIP) in partnership with the Center for Social and Economic Research (CASE, Poland) hosted the second panel of the virtual conference: “Direction – an Efficient State, Polish experiences of decentralization and modernization, lessons learned for Armenia and Georgia”. The first panel of the conference was hosted by the Analytical Centre on Globalization and Regional Cooperation (ACGRC, Armenia) on November 26, 2020 and was focused on the Armenian case. Find out more about the first panel here.

The project is financed by the Ministry of Foreign Affairs of Poland and aimed to prepare a guidebook about the Georgian and Armenian decentralization practices and lessons learned from Polish experience.

A two-day-long virtual conference featured a number of presentations and subsequent discussions about Poland’s experience of carrying out administrative reform and the lessons learned for Armenia and Georgia. The two panels hosted experts of local self-government, decentralization and public administration as well as other stakeholders from Armenia and Georgia respectively.

The second panel was moderated by Stanislav Bieliei, Project Manager at CASE. He welcomed the audience and introduced the project, under which the conference has been organized. Mr. Bieliei also delivered a speech himself about the Polish experience of decentralization of financing the local municipalities. In addition, further input regarding the Polish experience has been provided by Agnieszka Kulesa, Researcher at CASE, who made a brief historical overview of the main stages of decentralization and current administrative divisions in Poland. He also covered the topics such as providing public services  on local level and absorption of external funds by local governments in Poland.

The Georgian perspective was presented by project team members representing Georgian Institute of Politics – Gvantsa Ichkiti, Project Coordinator, GIP and Salome Kandelaki, Project Coordinator/Junior policy analyst, GIP – who jointly presented the report about the “Needs and the main blocking points of decentralization in Georgia”. In their presentations, Ms. Ichkiti and Ms. Kandelaki mainly focused on the challenges that municipalities face in terms of acting independently on local level, in particular with regards to providing public services efficiently, undertaking loans and receiving grants from the international donors, budgeting and managing the received funds as well as engaging local communities in exercise of self-governance.

The presentations were followed by the feedback and comments from the Georgian experts as well as by the questions from the audience. The event was live-streamed on social networks and was held via Zoom online platform in English with simultaneous translation to Georgian.