It is noteworthy that the government views the “violent groups” as those people with different opinions who use the right of peaceful assembly, and confine the threats from them within the same legal framework that guarantees the rights of those people who express their opinions in a peaceful manner (Ombudsman.ge 2020). In addition, the government does not implement any efficient preventative measures to guarantee the right of peaceful assemblies and provide protection for the peaceful participants (Ombudsman.ge 2020). This situation leaves space for the assumption that the state is informally cooperating with those far-right groups and segments of the clergy that are organizing counter-protest actions and, in this manner, informally impairs the freedom of peaceful assembly in the country.

Party Identity as the Basis for Splinter Party Electoral Success 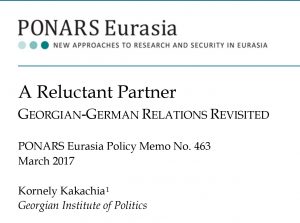