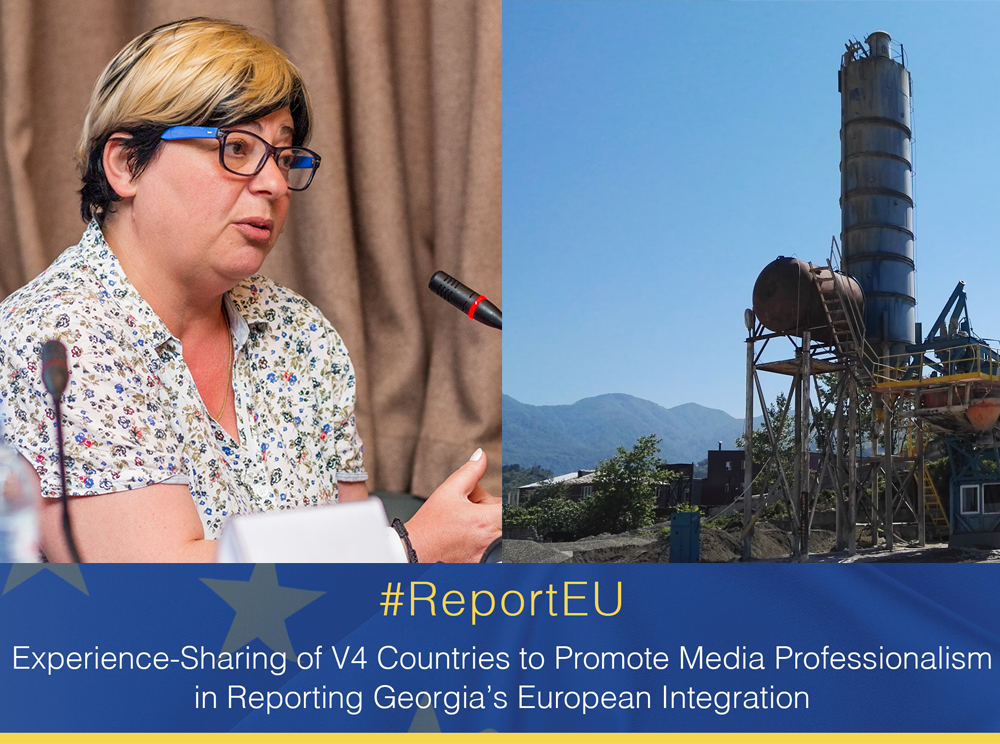 A concrete factory on Batumi’s Shanidze 1st Alley has been operating for several years. There are 180 families living nearby and multi-storeyed residential blocks within a few metres as well as a public school and a kindergarten adjacent.

Georgia’s environmental protection legislation consists of the Constitution of Georgia as well as international treaties and agreements including the EU-Georgia Association Agreement, the Law of Georgian on Environmental Protection, other laws and sub-legal acts. In accordance with the legislation, Georgia has to ensure that people are able to live in a healthy and a clean environment and guarantee the protection of a safe and healthy environment in accordance with the public’s ecological and economic interests as well as taking the interests of the present and future generations into account.

The concrete factory on Batumi’s Shanidze 1st Alley has been around for a long time. There are 180 families living nearby and multi-storeyed residential blocks are located within a few metres with a public school and a kindergarten adjacent. Inert materials (sand, gravel), which are sources of air pollution, are scattered around the factory’s yard. Large volumes of cement dust are made airborne whilst loading the cement. This dust in the air is mostly from cement, plaster and asphalt-concrete enterprises. Therefore, the population suspects that their health might be in danger.

After signing the EU-Georgia Association Agreement, environmental protection issues have acquired paramount importance. Since 2016, it is mandatory for every individual or legal entity producing more than 200 tonnes of non-hazardous waste, over 1,000 tonnes of inert waste or any amount of hazardous waste in a year to have an environmental administrator.

Temur Kontselidze is the Environmental Administrator at the concrete factory, owned by MIG LLC, located on Batumi’s Shanidze 1st Alley. In his interview with FactCheck, Mr Kontselidze confirmed that the problems emanating from the cement need to be dealt with. In turn, the owner of the enterprise, Giorgi Abashidze, states that he understands his responsibility and has already purchased a filter although it has not yet been installed.

MIG LLC has been the owner of the concrete factory since October 2018. Prior to that, the enterprise was owned by Gumbati Betoni LLC (known as Kantser LLC prior to 2016) which then sold it. For the first time, FactCheck brought this problem forward under the concrete factory’s previous owner. At that time, we requested information from the then Ministry of Environmental Protection and Natural Resources of Georgia (it is currently no longer an independent ministry). In accordance with the response we received from the Ministry of Environmental Protection and Natural Resources on 13 October 2015, the aforementioned concrete factory, in agreement with the Environment and Natural Resources Directorate of the Ajara Autonomous Republic, prepared a technical report on stationary sources of atmospheric air pollution and an inventory of hazardous substances coming from the concrete factory. In accordance with the report, the distance between the concrete factory and the nearest settlement is 300 metres. In fact, the factory is located in the middle of an inhabited area and has a shared fence with several residents. There are a public school and a kindergarten nearby.

The document reads that the concrete factory releases cement dust into the air which is produced when the cement is loaded and processed in silos (bunkers). In addition, inert materials (sand, grip) scattered around the yard of the factory are another source of air pollution. In accordance with the report and given the quantitative and qualitative indicators of environmental impact, the factory is not required to produce an environmental impact assessment (EIA) report. The Directorate was planning to inspect Gumbati Betoni LLC in the near future (referring to May 2017 when FactCheck received a reply), including taking a measurement of the concentration of hazardous substances released into the atmospheric air.

After a certain period of time, FactCheck took interest in the results of the factory’s inspection. In accordance with the reply we received from the Ajara and Guria Regional Directorate of the Environmental Supervision Department, measurements were taken and an administrative violation protocol was made against Betoni Gumbati LLC on 11 August 2017 pursuant to Paragraph 1 of Article 78 and Paragraph 4 of Article 84 of the Administrative Offences Code of Georgia. This envisions a fine from GEL 500 to 1,000 for the violation of the regulations of gas and dust trap devices and a GEL 500 fine for failure to submit documents, materials and information.

The Directorate also sent an inspection protocol which states that samples were taken during the mixing of liquid concrete and loading it into the concrete carrier. Therefore, the inspection concluded that the concentration of hazardous dust particles in the air did not exceed the allowed threshold. However, the population says that if samples had been taken during the process of loading the cement into the silos, the results would have been different. Two years have passed since then but the relevant agency has not verified whether or not the concrete factory reduced the harmful impact on the environment.

Giorgi Abashidze claims that state inactivity is to blame for this situation because the state did not prevent the settlement of people in an industrial zone. People started to move into this territory at their will at the beginning of the 2000s. Later on, the government legalised the ownership of their residences. When the government issued a permit for the construction of the factory, several dozens of families had already been living there. Mr Abashidze says that in order to fully solve the problem, the government has to relocate the people and offer them alternative housing or the factory should be closed down although none of the stakeholders are willing to do this. Mr Abashidze stated that he will install the aforementioned filter to reduce the harmful impact on the environment by the end of this summer and will try to relocate the factory to some other territory in the future.

For further information, the technical report dated 2015 was agreed with the then Head of the Ajara Autonomous Republic’s Directorate of Environmental Protection and Natural Resources, Vakhtang Tsuladze, who is currently a member of the Supreme Council of the Ajara Autonomous Republic from the Georgian Dream for Democratic Georgia party. The current owners of the concrete factory are donors of the same party. In 2016, they donated GEL 35,000 each to the Georgian Dream.

At our first meeting with the local population, FactCheck inquired what they knew about their rights and about the commitments undertaken by Georgia as a part of the EU-Georgia Association Agreement vis-à-vis an ecologically safe environment. Iamze Mzhavanadze, a local inhabitant, responded in surprise: “When the factory is running, the dust is so thick that we cannot see our neighbour’s yard, let alone Europe and what ecology and environmental protection you are talking about.” Today, Ms Mzhavanadze says that she and her neighbours have picked up a lot and learned to fight for their rights. Currently, the cement factory is not operating at full capacity and people are hopeful they can score further success.

The article is prepared in the framework of the project – “Experience-Sharing of V4 Countries to Promote Media Professionalism in Reporting Georgia’s European Integration”, funded by International Visegrad Foundation, implemented by the Georgian Institute of Politics (GIP, Georgia) in partnership with GLOBSEC (Slovakia), Institute of Public Affairs (ISP, Poland), and Masaryk University (Czech Republic).

The project is co-financed by the Governments of Czechia, Hungary, Poland and Slovakia through Visegrad Grants from International Visegrad Fund. The mission of the fund is to advance ideas for sustainable regional cooperation in Central Europe.

The views and opinions expressed in this article are the authors’ alone and do not necessarily reflect the views of the Georgian Institute of Politics, the International Visegrad Fund, GLOBSEC Policy Institute, Institute of Public Affairs and Masaryk University.

#ReportEU – “A prospect with long-term economic benefits for Georgia”