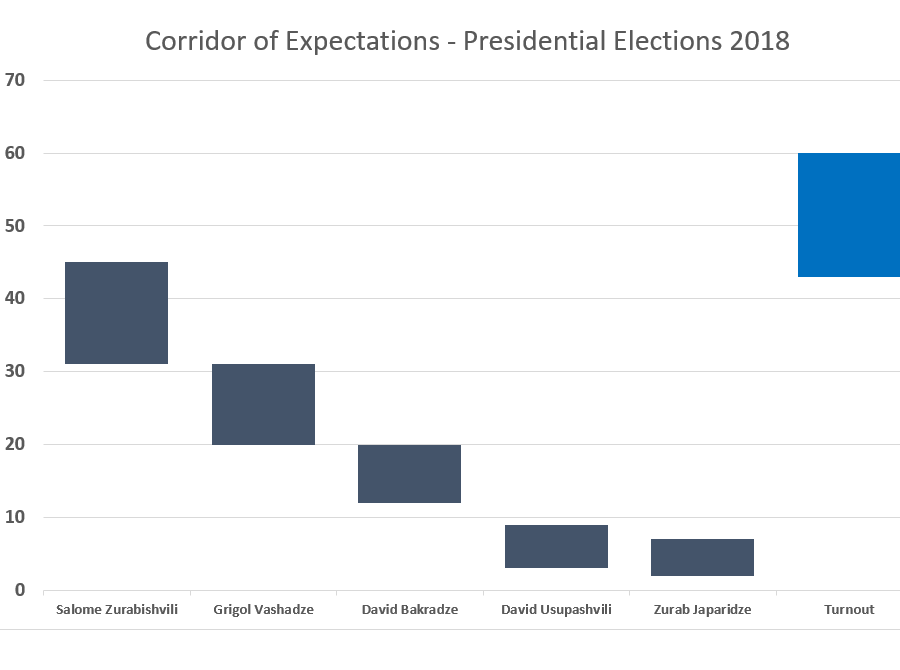 The candidate endorsed by the Georgian Dream (GD), Salome Zurabishvili, remains the strongest contender in the October 28 presidential election, but she will not win in the first round, according to the latest poll of engaged observers and experts. The expert survey, conducted by the Georgian Institute of Politics (GIP) in early October, is based on the opinions of 40 international and Georgian political observers and experts, whose input was collected through various channels. In sum, these estimates can be viewed as a “corridor of expectations” for the outcome of the upcoming presidential elections.

Figure 1: Corridor of expectations (in percent) Who is going to win the presidential election?

According to surveyed experts (figure 1), Salome Zurabishvili, who is endorsed by the governing Georgian Dream party, is poised to receive the most votes in the upcoming presidential elections. It is likely, however, that she will not receive enough votes to win the elections in the first round. According to the survey, Zurabishvili’s vote share in the first round of the elections will be between 31-45%. She will be followed by the United National Movement (UNM) candidate, Grigol Vashadze, who is expected to receive between 20-31% of votes. David Bakradze from the European Georgia party is predicted to come in third, with 12-20% of votes. The other two opposition candidates, David Usupashvili (Development Georgia) and Zurab Japaridze (Girchi), will not exceed 10% in the first round, according to the polls. We also asked the experts to evaluate incumbent President Giorgi Margvelashvili’s decision not to run again for the office. Almost half of the surveyed observers (47%) assessed his decision negatively and only 26% said he made the correct decision.

Finally, the survey included a question about the candidates’ chances if there is a second round of voting (figure 2). Here, the overwhelming majority of both Georgian and international experts (71%) believed that the ruling party’s endorsed candidate would win the second round.

(Most of the data was collected between October 4 and October 9, and thus does not reflect the most recent political developments, which may have an impact on election outcomes.)

Figure 2: If there were to be a run-off, what do you think the result would be? In addition to candidates’ ratings, the expert polls also asked experts to provide their opinion and recommendation about the pre-electoral climate and campaigns. The experts’ recommendations and rather critical assessment identified many weaknesses in the Georgian opposition. The respondents criticized the opposition’s inability to create a united front against the government and its failure to frame the campaign as a referendum on the opaque and informal one-person rule in the country. The experts also critically assessed the performance of governmental candidate Salome Zurabishvili but noted that she is still in a more favorable position since she is supported by the government and former Prime Minister Bidzina Ivanishvili.

Expert Polls, an initiative of the Georgian Institute of Politics (GIP), collects the views of 30-50 experts, and presents these views and opinions to the public in an accessible way. The initiative started on October 1, 2016, and has yielded solid results in the past (for previous results see here and here). The corridor of expectations plots two-thirds (66%) of the estimates. Previously, we included three-quarters of the estimates (75%) but decided to narrow the estimate for this election. (The values for the 75% range would be Zurabishvili 27-47%, Vashadze 17-34%, Bakradze 12-21%, Usupashvili 2-12%, Japaridze 2-8%. In other words, the results are fairly similar, as most estimates cluster in the center of the range.)

The expert polls are loosely based on the aggregation of polls developed by American pollster Nate Silver (http://fivethirtyeight.com/), as well as on the broader idea that collective estimates can offer a kind of “wisdom of crowds,” as described by James Surowiecki. With the help of experienced international consultants, we are adapting this model to the Georgian context. The project is currently funded by the National Endowment for Democracy (NED). Compared with sociological surveys, expert polls have a few significant advantages. With regards to vote share, this expert poll is likely to provide more plausible results than last-week surveys, due to the high percentage of voters who are not willing to reveal their preferred choice, a problem that is further compounded by the difficulty of estimating which voters will vote on Election Day. The problem of nonresponse cannot be resolved by spending more money and interviewing more voters. Even the most expensive last-week survey would thus require interpretation.

This expert poll nevertheless builds on existing surveys, and provides an aggregate interpretation of the likely results. Many of the people who entered their estimates have more than 10 years of experience working with polls and Georgian elections. These engaged observers and experts were approached in a number of different ways, and the GIP team cleaned the collected data based on established principles.

By providing corridors of expectations, the poll helps to focus the discussion on likely scenarios and how to prepare for them. It is possible, given the turbulent pre-election events, that results will significantly deviate from the ranges suggested in this poll. Moreover, the assumption is that the vote is largely free and fair.