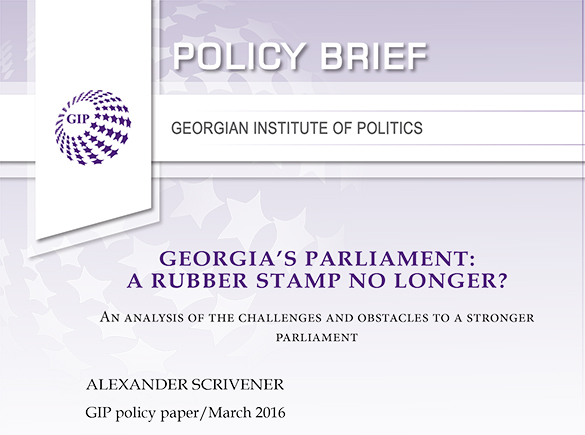 Has Parliament become more effective since 2012?

YES – Parliament now includes the main political protagonists. In the previous parliament, the main opposition groups boycotted the legislature. While UNM boycott committee meetings, their presence in plenary sessions ensures that the real debate between the two main parties in Georgia happens within the legislature.
YES – Parliament has become more than just a rubber stamp. Between 2003-2012, parliament acted as a mere rubber stamp for government initiatives. The government also passed constitutional amendments at will. While for ordinary law this situation has improved only slightly, the new higher threshold for constitutional amendments has ensured a greater degree of stability.
YES – Parliament has become more important to the Georgian political process. The constitutional amendments which came into effect in 2013 led to an increase in the formal role of parliament relative to the previous state of affairs. While this has not turned Georgia into a parliamentary republic, this means parliamentary elections are now undoubtedly the most important determinant of power in Georgia.
NO – Parliament is not where important political decisions are made in Georgia. Important decisions continue to be made by a small group of leaders within the ruling Georgian Dream coalition behind closed doors. The most powerful of these is still the former Prime Minister, Bidzina Ivanishvili, despite the fact that he no longer holds formal office. Any internal disagreements within the coalition are usually hammered out within informal meetings not open to the public.
NO – Serious weaknesses remain in the functioning of parliament. A lack of expertise within Parliament in basic legislative tasks like drafting laws remains a significant problem. Parliamentary committees (partly due to an opposition boycott) also do not properly scrutinise legislation.
NO – Weak party system and political culture undermine the parliamentary system. Georgia retains a highly personalised political culture closer to that of classically presidential political systems like those of Latin America. Unlike Latin America, however, it is also characterised by the near total absence of strong ideologically oriented political parties. The combination of these two factors undermines the capacity of the legislature to act as an effective check on executive power.