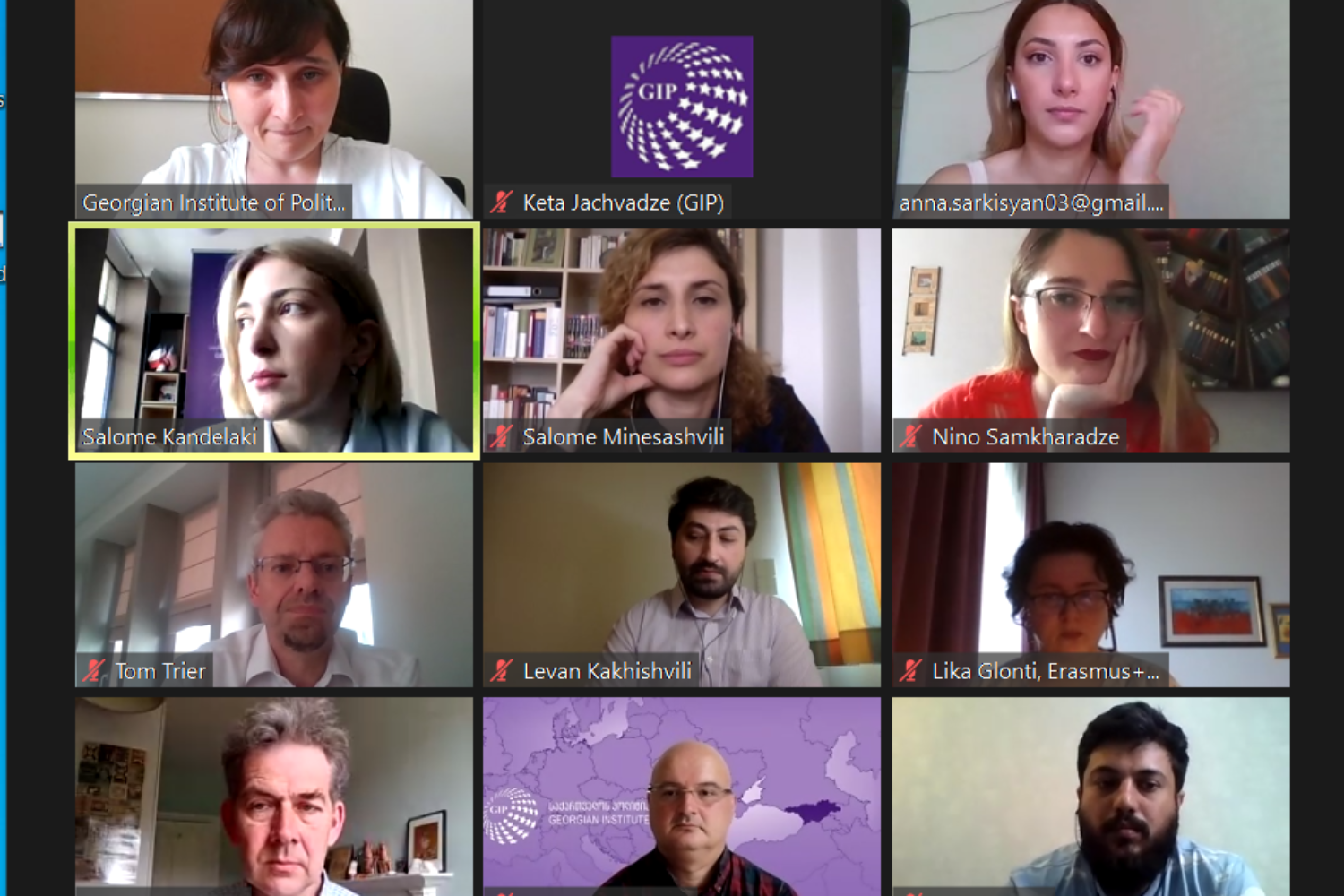 On 28 May, 2021, Georgian Institute of Politics (GIP) hosted the concluding conference of the Erasmus + Jean Monnet project “Promote and Act for Europe,” financially supported by the EU. The aim of the conference was to present the results of the project to its stakeholders. The conference took place online via Zoom platform in four languages: English, Georgian, Armenian and Azerbaijani.

Panel 1: The lack of Information as a key obstacle in benefiting from the EU opportunities

The first panel of the conference was moderated by Dr. Tom de Waal, a senior fellow with Carnegie Europe, specializing in Eastern Europe and the Caucasus region.

The first speaker of the panel was Levan Kakhishvili, a Doctoral Fellow at Bamberg Graduate School of Social Sciences (BAGSS) at the University of Bamberg, Germany and a Policy Analyst at Georgian Institute of Politics (GIP). As an academic coordinator of this project, Mr. Kakhishvili introduced the research and presented his findings about whether ethnic minorities in Georgia benefit from the Europeanizaton process. The presentation addressed the issues of how minority communities perceive Europeanization and what barriers they face to fully enjoy these benefits. The second speaker of the panel was Dr. Salome Minesashvili, a policy analyst at the Georgian Institute of Politics, who holds a doctoral degree from Freie Universität Berlin, Germany. In her presentation, she emphasized the problem of information access and the possible ways to counter misinformation among ethnic minorities.

After finishing presentations, Elnur Alisoy, local coordinator of Kvemo Kartli region under the framework of this project summarised the project impact. Following the presentations, the attendees had an opportunity to ask questions and express their opinions during the Q&A session.

Panel 2: Interrelation of the low level of political participation and the skepticism towards the European Integration

The second panel of the conference was moderated by Mr. Tom Trier, MAC Analyst · ‎European Union Monitoring Mission in Georgia (EUMM). The first speaker of the panel – Nino Samkharadze, junior analyst at GIP – focused on tackling the issue of skepticism among minority communities with respect to Europeanization. While the second  speaker – Salome Kandelaki, junior analyst at GIP –  talked about the barriers to political participation of ethnic minorities.

All speakers proposed thematic recommendations addressing the relevant state institutions in Georgia, EU delegation as well as the political parties.

The presentations were followed by the summarising points of  Mr. Koba Chopliani, Coordinator of the Council on National Minorities under the Public Defender’s Office. He talked about the human rights perspective as well as state policy related to the political and civic integration of the ethnic minorities as well as their involvement in European integration process.

The second panel was concluded with another round of the Q&A session, where the attendees had an opportunity to ask questions and express their opinions.

At the end of the discussion, the project beneficiaries shared the videos, which they created under the framework of this project as a result of several workshop sessions. The documentary videos were shot by the local youth and journalists from Kvemo Kartli and Samtskhe Javakheti regions of Georgia and described the situation of how the ethnic minorities benefit from the Europeanization process and what kind of barriers they face in this process.

Video 2 Education opportunities of the EU >>