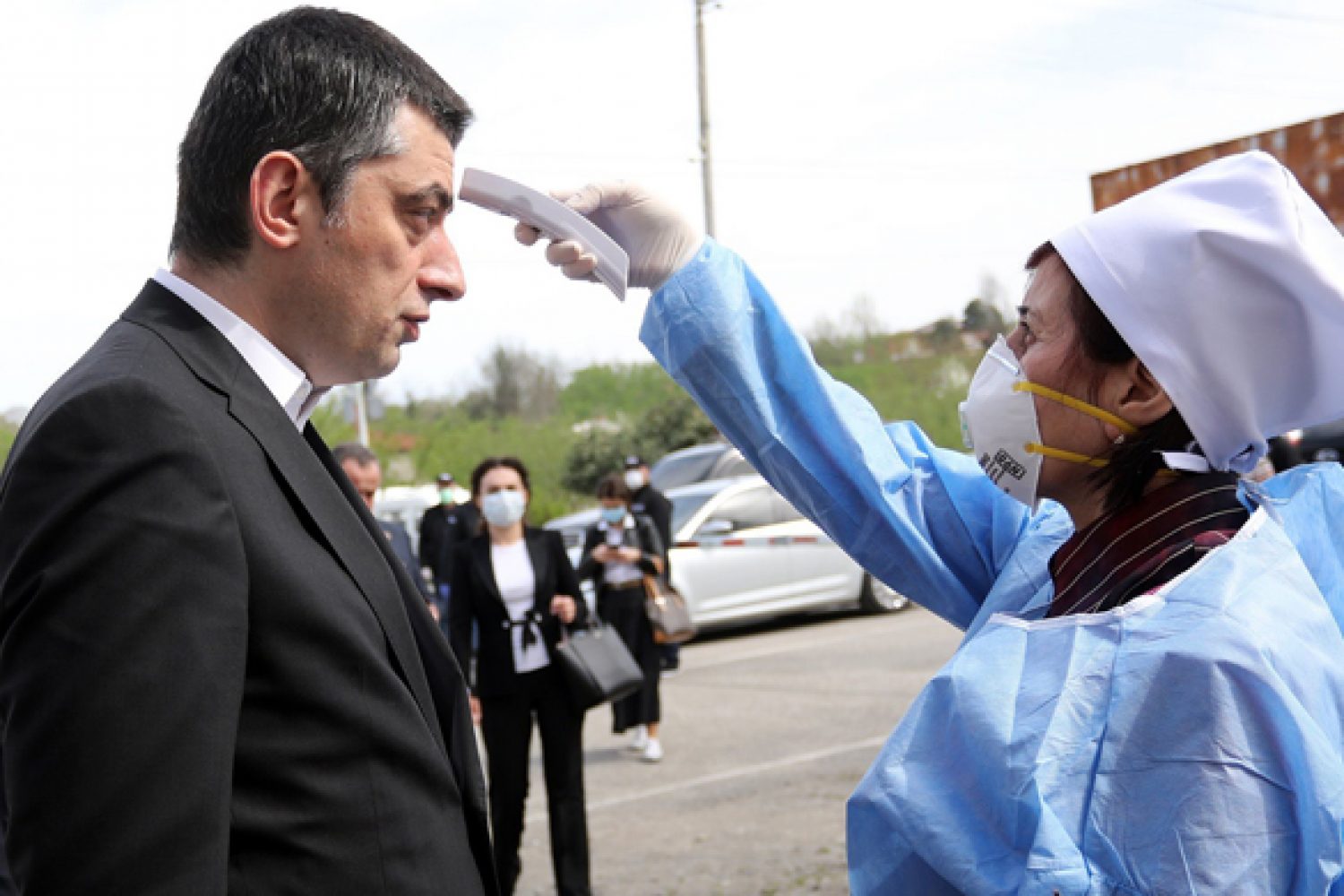 The new coronavirus pandemic, worldwide panic and counter-measures in response to the pandemic day by day transform  not only deep-rooted social relations but also political life. Similarly to Europe and many other countries of the world, Georgia also declared a nationwide state of emergency and introduced restrictions on numerous social or economic activities. In addition to social life and the Georgian economy, the coronavirus crisis has a significant impact on politics. Just a couple of weeks ago, “Georgian Dream” was going through a severe political crisis and was pressured both from the international community and from the opposition. While previously major opposition parties questioned the legitimacy of the ruling party, right now most of them support the introduction of the state of emergency and therefore, the increased power of the ruling party. With this consideration, it is important to ask: what impact might the coronavirus crisis have on Georgian politics during the post-crisis period?

“Rally around the flag effect”

In the short-term, the crisis may be politically beneficial for “Georgian Dream”. There are several interconnected reasons behind it, among which the rallying around the flag effect stands out. In general, during a crisis like this, the issues are being less politicized and the majority of the population supports the ruling party in power. While this reasoning more frequently refers to the context of the military confrontation, it may also be applied to the crisis of the scale of coronavirus pandemic. During the crisis of this scale, there is a shared feeling among the public that the nation is facing a threat, which contributes to the unity of the society and a sharp increase in the popularity of the leaders. Therefore, since “Georgian Dream” is the party in power, it is expected that its popularity will grow. This is the exact scenario unfolding in many of the European states; regardless of the number of infected or deceased, the population mostly supports the ruling political power.

In addition to the population, a similar effect is evident among political parties. As a result, parties are less involved in confrontations with each other and the political process is reduced to the minimum. Opposition parties’ support of declaration of the state of emergency and statements such as “there is no time for criticism” are vivid expressions of this pattern. Considering the fact that the opposition parties were fiercely criticizing the ruling party during the past months, softening political opposition may benefit “Georgian Dream” at first sight.

Moreover, similar crises represent good opportunities for the ruling party to show off leadership and to take initiatives; even more so, when the responses of the government on the epidemic are positively assessed by the experts. During the routine political life, it is hard to find a situation in which the leader can take the initiative while staying immune from fierce criticism.

Considering the aforementioned, it may be said that the crisis seems to be politically beneficial for “Georgian Dream”. However, zooming out and analyzing the events in the wider context may suggest a different scenario.

Why the Crisis May Turn Out to be Politically Unfavorable for the Government?

Despite the initial success, there are numerous factors that will resurface over time. In Georgia, like in other Eastern Neighborhood countries, the healthcare system requires fundamental reforms and likely, overcoming continuous and unpredictable crisis will prove to be challenging. Furthermore, weak state institutions lacking public trust, will further complicate the situation for the Government in the long term.

Social-economic issues are also worthy of mention as these issues, generally, are of primary importance for the voters. Considering the fact that the social-economic conditions will undeniably worsen because of the existing crisis, it is expected that the coronavirus epidemic will turn out to be politically unfavorable for “Georgian Dream” in mid- and/or long-term perspective.

Undoubtedly, the coronavirus crisis and restrictive measures introduced against the epidemic will have a visibly negative impact on the Georgian economy. For instance, the national currency has already devaluated significantly. The increase in the level of unemployment and poverty and the decrease in tourism and remittances are also expected.

For the absolute majority of the Georgian population, foremost challenges facing the country are related to the social-economic area (see Diagram 1). Since 2013, approximately half of the population has named unemployment as the most important problem for Georgia.

Figure 1. The importance of social-economic problems for the population. 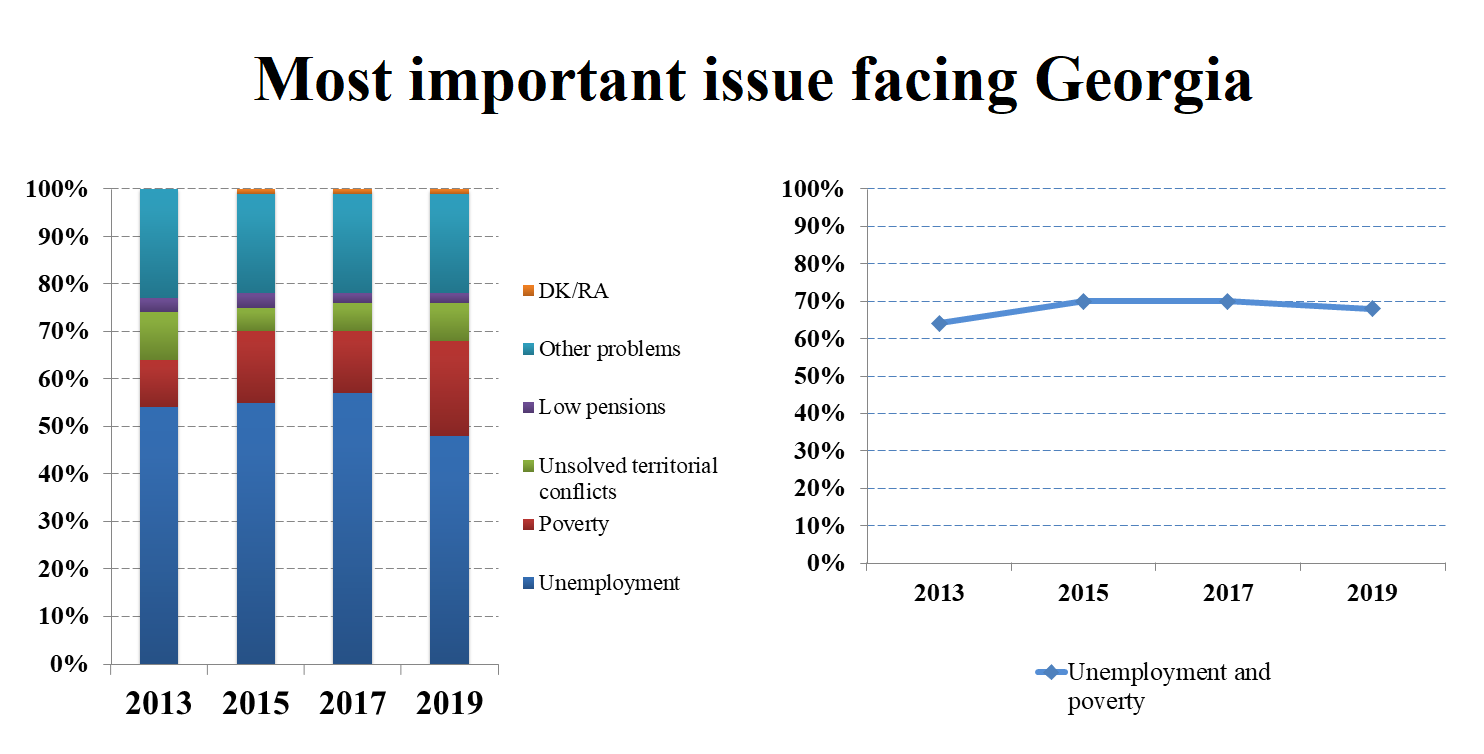 Note: The figure shows the percentage of responses from respondents on the question: “what do you think is the most important issue facing Georgia at the moment?”

Another issue that may work against the ruling power in the long term is related to the mishaps or possible mistakes made during crisis management. In force majeure situations, like the one following the spread of the coronavirus, it is unlikely that every step taken by the Government is rationally scrutinized. As various research indicates, the ruling party may pay the price of mistakes made during the crises even after several years.

With the mistakes made during crisis management, worsening social-economic conditions may prove to be even more damaging for “Georgian Dream”, as at this stage the ruling party tries less to cooperate with the opposition and therefore, does not share responsibility with any of the opposition parties.

To sum up, it may be concluded that in the short-term period, the crisis caused by the spread of the coronavirus will likely be politically beneficial for the ruling party since the society tends to rally around the flag during a similar situation. What is more, the political process is not that active, which implies less criticism and less political damage to “Georgian Dream”.

On the other hand, in mid- and long-term perspective, the ruling party may have to pay significant political price, since the rise of poverty and unemployment, which is unavoidable as a result of the epidemic and the restrictive measures introduced by the Government, will to some extent translate into the dissatisfaction with “Georgian Dream”. Moreover, in the context of the global economic crisis, it will become harder to receive solid international assistance, since most of Georgia’s partners will be concentrating on solving their own problems. At the same time, mistakes made during the crisis management, which are not paid enough attention at this point, will start working against the Government over time. In the end, the extent to which this crisis will impact the ruling party and political life in Georgia, will mostly depend on how fast the Government presents the coherent and goal-oriented plan to respond to the crisis and how successfully it manages to implement the plan within the next couple of months.