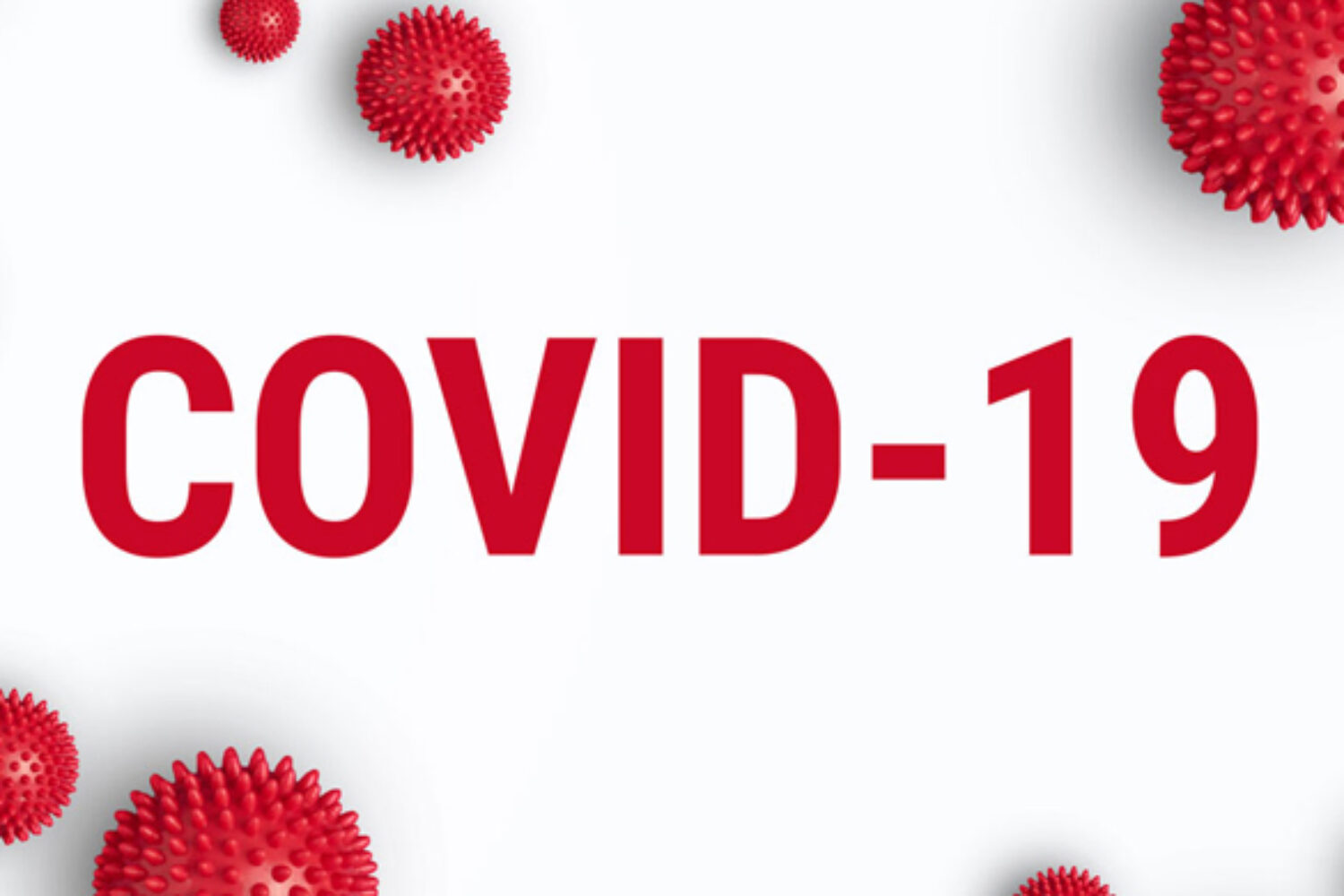 Georgia has been moderately successful in holding Covid-19 at bay and keeping case numbers low in the first 30 days since the outbreak.  In order to remain resilient against Covid-19 and keep the infection curve flat, the country will need to emulate the experience of Asian states, not European. It can remain a free and open society in the process, yet this endeavor will also require some substantial sacrifices. Georgia is among the few countries in the EU’s neighborhood that consistently looks to its European peers for policy guidance in its economic and political development. However, the EU and its member states have miserably mismanaged the initial phase of the outbreak of Covid-19.

Surprisingly enough, Georgia, with much less resources did a much better job in containing the virus in the first 30 days than the majority of EU member states. Whereas the Georgian government has managed to keep the virus within the first two phases of epidemic management (prevention and control), much of the EU sleepwalked into the third phase marked by exponential growth of infections, and is now finding it hard to contain the spread of the virus.

First, the attempts by the government to suppress cases of local transmission and to isolate new hotspots show that the risk of exponential growth is still imminent and can occur at any time.

Second, the current lockdown is not sustainable for a long period of time as it would do unrepairable harm to Georgia’s fragile economy and may even result in social or political unrest. Hence, to avoid the Covid-19 nightmare, Georgia should look to countries who have so far managed to accomplish both tasks – avoid full lockdown and contain the virus: East Asian democratic states.

Fortunately for Georgia, the handling of Covid-19 by the Georgian government in the first 30 days since its arrival in the Black Sea country has been in many ways a replica of East Asian crisis management. East Asian countries managed to contain the spread of Covid-19 below the vulnerable threshold by relying on a combination of preparedness, technology, and transparency. Georgia did lack technology but has shown unexpected resilience in terms of the quick mobilization of state resources, medical preparedness and aggressive contact tracing. Figure 1 shows that in terms of early preparedness, Georgia not only did a better job than many EU countries but it also outperformed the “Asian tigers” who are well-known for their management of epidemics.

By introducing somewhat draconian measures much earlier than its European peers, Georgia successfully prevented a large outbreak in the first few weeks and saved its vulnerable healthcare system from congestion. Georgia’s management of the Covid-19 epidemic also stands out in other interesting aspects. For instance, like some Asian states, Georgia seemingly did not follow the WHO guidelines which often issued controversial recommendations such as not to limit international traffic or assumptions about face masks not being effective. For instance, Georgia changed the WHO guidelines in its national protocol by removing high fever from the list of suspicious symptoms which made it possible to detect three times more infection cases in the first month since the first detected case.

Can big data contain the virus?

Despite initial success, Georgia is bracing for a rough road ahead. The country just registered its 100th infection case and the lockdown of economic life has already resulted in the devaluation of the Georgian currency. Hence, like the rest of the world, Georgia faces the dilemma of how to preserve its economy and ensure the healthiness of its population. Should the virus fade away within a few weeks or a couple of months, additional measures will likely not be needed and Georgia can outlive the virus in lockdown mode. But should it last for months, the government will be forced to gradually reopen economic activities and public life. In this case, Georgia will need more enforcement mechanisms to ensure the compliance of citizens especially for a time when the state of emergency is first lifted.

In this case, again, the European and Asian approaches could not be more different.

The European approach puts too much faith in the rational and enlightened citizen who bears responsibility for both themselves and the whole of society. In doing so, the state seems to be unwilling to make use of its central function: using the right of the monopoly on legitimate violence in case of need.

Yet even in the EU countries the irresponsible behavior of citizens and their lack of compliance with lockdown rules has often been a problem that significantly contributed to the emergence of the Covid-19 hotspots in Italy, Spain and elsewhere.

In relatively young states like Georgia, citizen compliance may be a bigger problem. The latest expert poll conducted by a Georgian think tank indicated the non-compliance of citizens as a major challenge for Georgia’s fight against Covid-19. Hence, the European solution of relying mostly on individual responsibility should be balanced with stricter central enforcement mechanisms. East Asian states provide some insightful evidence how the state can ensure the compliance of citizens and track the virus outbreak by using big data and modern AI technologies.

In particular, there are four countries/territories which stand out in this regard: Singapore, Hong Kong, Taiwan and South Korea. Singapore’s resilience against Covid-19 consists of a mix of surveillance technology as well as “transparency, comprehensive testing, and quick quarantining and isolation of suspected cases.” Singapore’s surveillance toolbox to control Covid-19 includes mobile phone app TraceTogether, which tracks users’ proximity to other people and alerts “those who come in contact with someone who has tested positive or is at high risk of carrying the coronavirus.”

Taiwan too has centralized management of AI technologies and big data techniques to identify residents who were at greatest risk through their travel and medical history. Mobile phone records are used “to track the social contacts of those infected with the coronavirus.” Currently, mobile phones are digitally tracked via a so-called “electronic fence” to enforce the quarantine of some 6,000 residents of Taiwan.

South Korea too uses satellite-based phone tracking to trace infection chains. Coupled with early aggressive testing of suspected clusters and the enforcement of social distancing, South Korea has managed to contain one of the biggest early outbreaks of the virus outside China and to stabilize the curve.

Finally, Hong Kong has one of the most comprehensive yet controversial disease tracing systems. The government webpage dedicated to Covid-19 publishes very detailed data on each known positive case, including their address (!), to help other residents identify possible local transmission chains (Figure 2).

As one can observe, using AI and big data is an important part of the resilience of the East Asian states against Covid-19. It helped Asian countries to avoid long-term and economically painful lockdowns. Countries like Georgia could take notice. Still, using private data for surveillance purposes is a very contentious issue especially for aspiring democracies such as Georgia – especially since Georgian governments have a track record of using private data for political blackmail. Therefore, if introduced, it should be ensured that surveillance is limited to the tracking of Covid-19 epidemics and that its use be free from political risks. 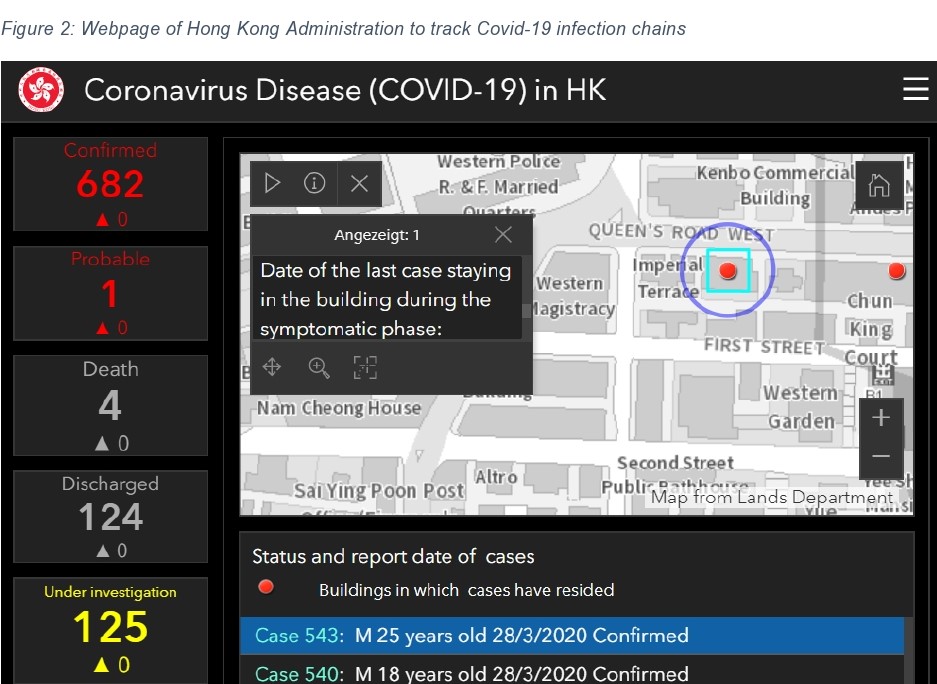 Finally, no surveillance mechanism can ensure the containment of an epidemic without individual vigilance and social adaptation to new dangers. The Asian social norms of contactless greetings and social distancing are considered to be the major factor behind East Asian resilience against disease outbreaks. Georgia belongs to the Mediterranean culture, with hugging and kissing as usual greeting habits and generally a very rich social life. Yet to cope with Covid-19 and be better prepared for future pandemics Georgia should embrace more Asian cultural habits.

It’s worth noting that East Asian states have collected invaluable experience from previous disease outbreaks such as MERS and SARS. In a way, they could be better role models for inexperienced countries such as Georgia than the WHO and some Western actors, not just in their clever use of AI technologies but in all areas of fighting disease outbreaks. Taiwan’s approach to surgical face masks and other medical equipment is illustrative in this regard. Whereas the WHO and the governments of Western countries dismissed face masks as unnecessary for the general population, Taiwan stepped up their production to 10 million daily production units and even introduced a face mask rationing system to ensure its population was constantly supplied and there was no shortage. Meanwhile everyone agrees that wearing face masks can protect from Covid-19 and can be a measure which can help prevent the re-emergence of the disease in the post-lockdown period.

Dr. Bidzina Lebanidze is a senior analyst at Georgian Institute of Politics (GIP). He is Postdoctoral fellow at the Institute of Slavic Studies and Caucasus Studies at the Friedrich Schiller University Jena.