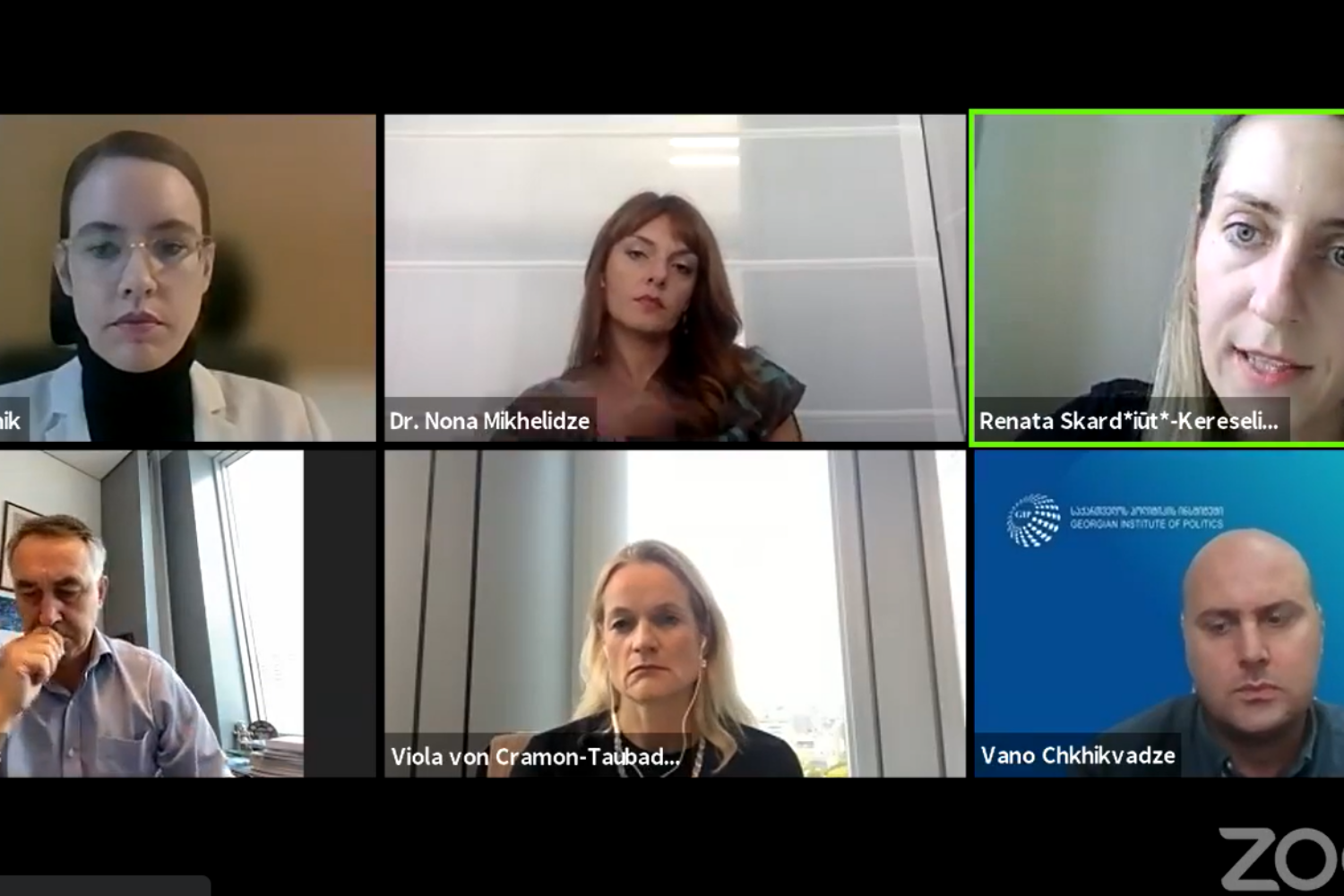 On September 29, members of the European Parliament together with the Georgian civil society representatives discussed ongoing pre-election processes in Georgia and the challenges the country’s democracy is facing.  As the country is preparing for its much anticipated local elections following the inter-party agreement brokered by Charles Michel, the attention from European partners is particularly important to ensure that democratic reforms remain at the top of the Georgia-EU relations’ agenda.

During the one-hour meeting, MEPs Viola von Cramon-Taubadel and Petras Auštrevičius addressed the audience. They reviewed the current relations between Tbilisi and Brussels and assessed the pre-election environment. Viola von Cramon-Taubadel and Petras Auštrevičius confirmed that the EU will pay special attention to the upcoming elections in Georgia and reiterated their expectations to uphold the principles of the inter-party agreement signed earlier this year.

Ms von Cramon-Taubadel expressed her concerns about the fatigue among the voters before the local elections.

“Politicians are responsible not only for their parties, but also for the country,” – said MEP.

“Our expectations for these local elections in Georgia are: free elections, fair elections and accepted results by the political parties <…> These local elections will be the vote of confidence”, spoke MEP Auštrevičius, adding that these elections are a chance to overcome the status of non-performing country: “Democratization is the major part of Europeanization in Georgia, and it is important to see those two processes going together.”

Dr. Nona Mikhelidze, a Senior Fellow at Istituto Affari Internazionali (IAI), highlighted that EU’s position has to be strong and principled, bringing in financial and conditionality measures if necessary.

“Otherwise it is not fair not only to European tax payers, but also discredits the EU to the liberal-minded Georgian voters”.

According to dr. Mikhelidze, the current democracy shortcomings in Georgia show not only the challenges to Georgia’s European integration, but also challenges for EU’s democracy promotion in Georgia.

At the opening of the event, Renata Skardžiūtė-Kereselidze, Deputy Director at Georgian Institute of Politics and Vano Chkhikvadze, Manager of the EU Integration Programme at Open Society Georgia Foundation (OSGF) addressed the audience.

The panel discussion was followed by a Q&A session, with Georgian civil society and media representatives, moderated by dr. Franziska Smolnik, Deputy Head of Research Division at the German Institute for International and Security Affairs (SWP). The round-table discussion is organized under the framework of the project “Georgia’s Europeanization: Assessing Progress After 2020” financially supported by the Open Society Georgian Foundation (OSGF).