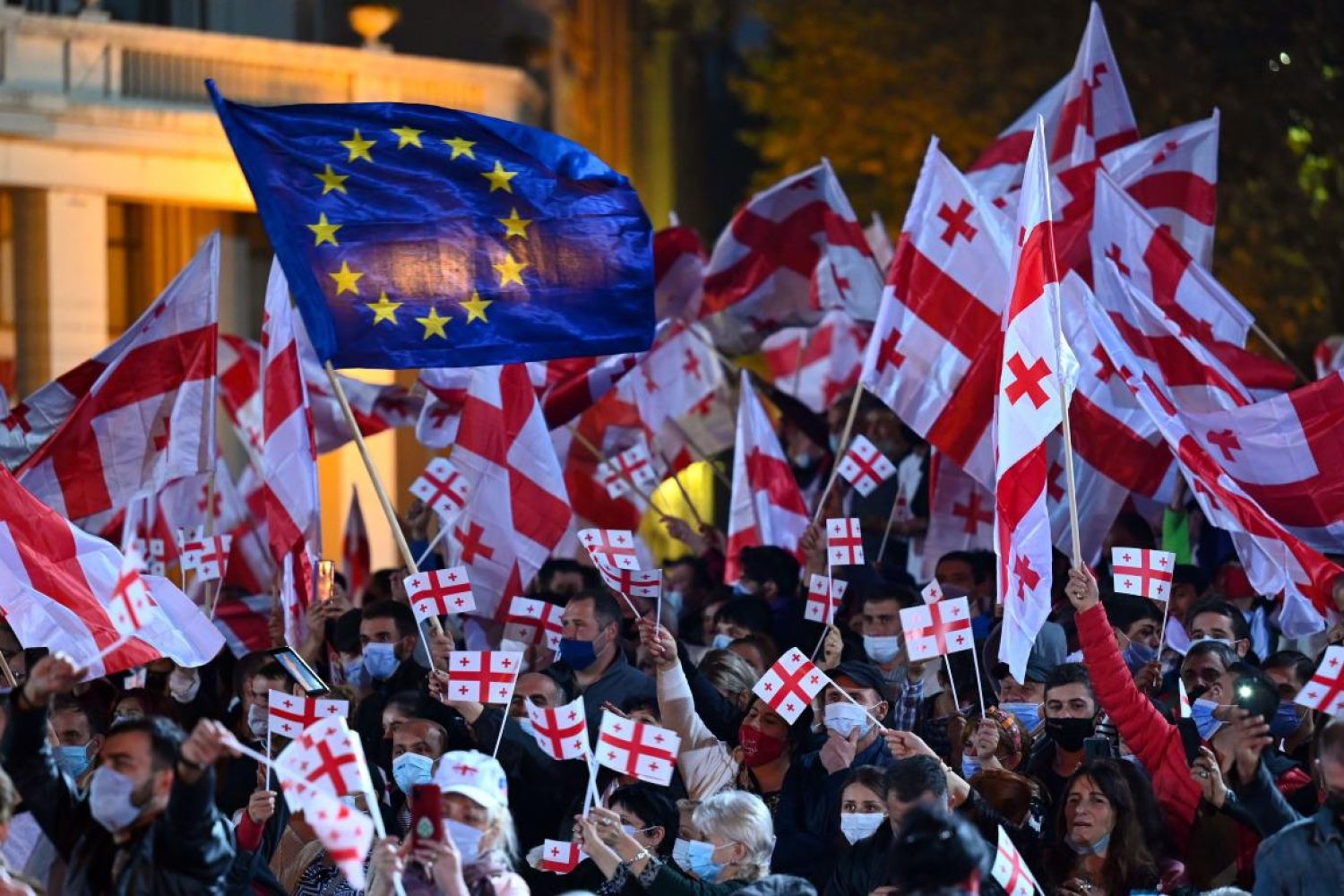 June 2022 is a memorable date for Georgia’s European future. For many reasons, if the decision on whether to grant Georgia candidate status is positive, it will be a turning point for the country’s development in the right direction. Historically, European integration has been supported in Georgia for the most part  as expressed and stated in the Constitution. However, if Georgia is not granted “candidate” status at this stage, maintaining public support will be difficult.

For us, it is vital that the alarming outcomes that might follow if Georgia is denied “candidate” status, are discussed in Brussels with the utmost caution.  Consideration of these risks and attempts to alleviate them is crucial. Due to the rapid geopolitical shifting, Georgia’s European future might be severely damaged, especially if the country remains outside the European radar without “candidate” status.

Positive Decision Made in Brussels as a Prevention of Euroscepticism

Traditionally, there has been robust support for Euro-integration in Georgia.  Yet, when examining the dynamics of this attitude one can see that the decisions on Georgia made in Brussels have had a significant positive impact on public attitudes in the country.

Table 1: If there were a referendum tomorrow would vote for or against EU membership? (%) 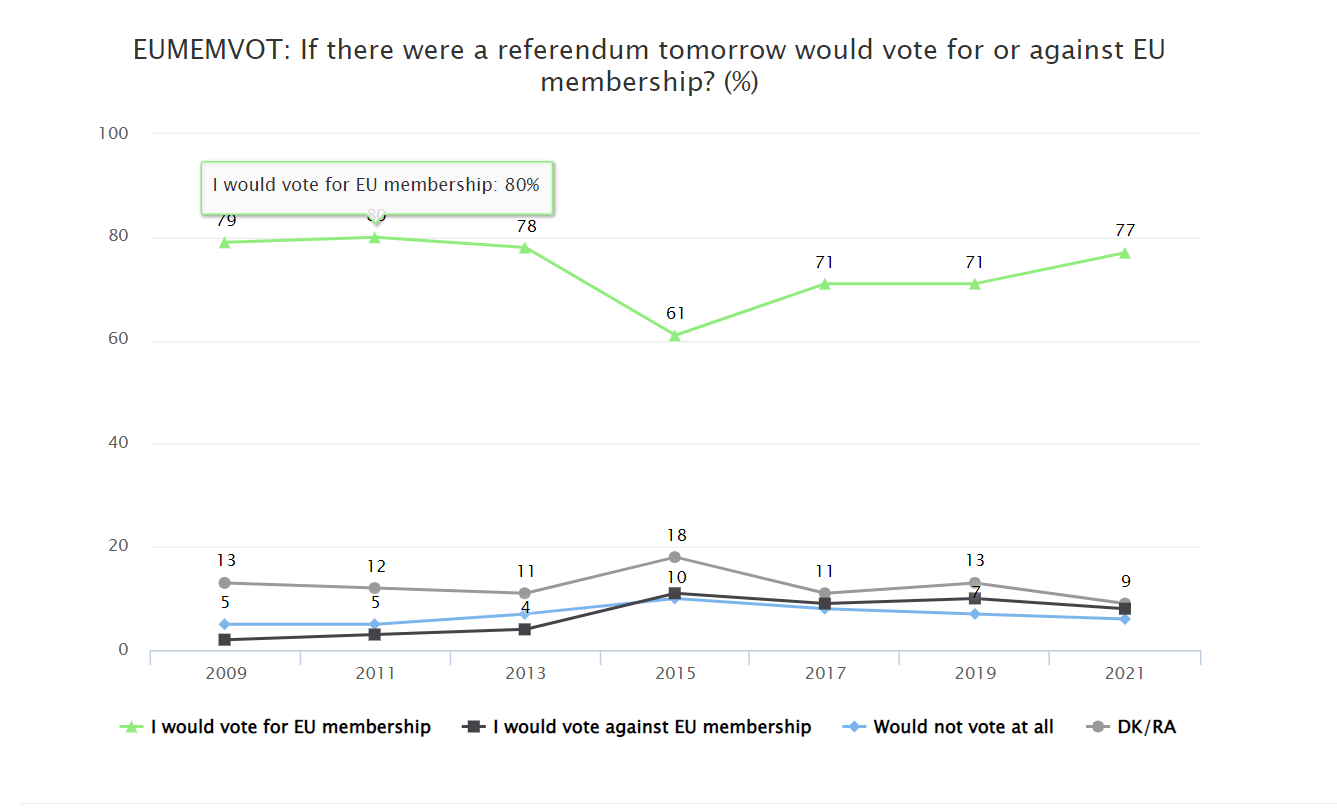 It’s noteworthy that the period of such growth coincides with significant advances in terms of the European integration process –  implementation of the Association Agreement and DCFTA, signed in 2014, was enacted; also in 2017 visa liberalization entered into force. In addition to the tangible results these developments brought to citizens, they also strengthened political support among the public and highlighted the popular demand to continue the European integration process. Accordingly, the final outcome of this process for Georgia is accession to the EU.

During February-March 2022 public support for EU integration increased noticeably (Table 2). This was most probably conditioned by the start of Russia’s war in Ukraine and the subsequent strengthening of pro-Western attitudes in Georgia. This is one of the most important signals to Brussels from the Georgian public, indicating that the demand for European integration is strong and steady. 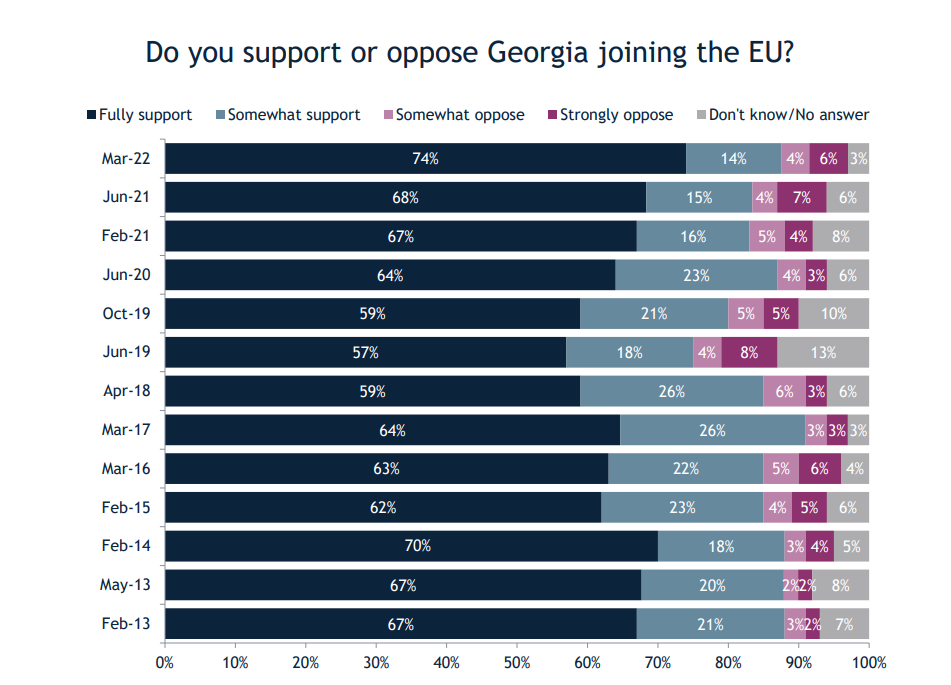 Accordingly, the decision made in Brussels on 23-24 June will have a crucial impact on public attitudes. Granting “candidate” status to Georgia will lead to a new phase of mobilization of popular opinion in the country. Logically, in the case of “candidacy” status, support and motivation will increase and the public will have more resources with which to exercise control over the government to ensure that it actually implements candidate country requirements.

However, if Georgia doesn’t obtain “candidate” status at this stage, or if the country has to adapt to a changed format, this will most probably raise the levels of Euroscepticism in the country and significantly decrease public support towards the European integration processes. On the one hand, this outcome may cause continuation of the Georgian public’s disappointment with Western inertia during the August War in 2008, on the other hand it might lead to future Georgian negativity, reflecting an important missed opportunity that won’t re-appear in the near future.

At this stage, one of the central threats towards EU integration process in the country comes from the far-right groups, driven by pro-Russian and anti-western rhetoric, especially in the context of the ongoing war in Ukraine. It is important to observe the following three far-right political parties, the Conservative Movement, Alliance of Patriots of Georgia and the Nation, as they own instruments for public opinion mobilization in the form of TV broadcasts. All the three parties broadcast on TV and lead aggressive propaganda campaigns against the EU and in favor of Russian narratives.

In this regard, there are two ways in which the actions of these parties’ might damage the EU integration process: on the one hand information propaganda and its impact on public opinion, on the other hand their violent actions. The Conservative Movement and its media-tools are especially active in both directions, acting under the name on Alt-info with their regional broadcasts.

Anti-European propaganda narratives include mainly speculation, such as “a citizen in favor of European Integration is directly an LGBT activist” or Europe is losing against Russia, the West can’t deal with Russia and thus it can’t be a priority for Georgia. In addition to that, these groups recently  publicized plans for violent actions, especially against the LGBT community, and they acted violently outside various European embassies, damaged the EU flag and performed radical actions. The events of July 2021 showcase that the radical actions of these groups are hard for the state institutions to control.

Accordingly, it is easy to imagine that if Brussels shuts the window of opportunity for Georgia against the background of the ongoing geopolitical shifts, these groups will take the field to spread their anti-European narratives. Anti-liberal right groups that have been especially active during recent years will attempt to rapidly fill the vacuum created as a result of public nihilism and Euroscepticism. This will lead to the exclusion of Western soft power from the country, which will in the long run directly benefit the Kremlin and pro-Russian forces acting in Georgia.

Confrontational Rhetoric of the Ruling Party

Georgia not obtain “candidate” status at this stage, there is a risk that the ruling “Georgian Dream” party will further enhance its confrontational rhetoric and counter-blaming strategy towards the EU. The rationale behind this claim is that in recent years’ representatives of the ruling party often hold fierce rhetorical arguments with MEPs (Members of the European Parliament) who are sceptical about the pace of democratization in Georgia.

In response to the critical resolution adopted by the European Parliament on June 9, the official statement of the ruling party contained phrases that the “resolution has nothing in common with European values and this sort of resolution, I’ll say it directly, is not worth a dime”. The official statement also highlighted the attempt to oppose the assessments of the MEPs with the will of Georgian public: “that what the protectors (MEPs) of criminals’ dislike, the Georgian public likes”. Such attempts spread the idea that the values of Georgian public and the EU are not in line, a narrative that seriously threatens Georgia’s European aspirations.

Probably, should Georgia be left without “candidate” status, the ruling party will have placed itself in a defensive position with the public. This will lead to counter-blaming and strengthen the rhetoric hurled at European policy-makers, which will have a negative impact on the attitudes of part of the public.

Strong, steady popular support has been the foundation that determines Georgia’s European aspirations, the foreign policy course reaffirmed in the Constitution. While the public is eagerly waiting for an historical decision from Brussels in less than two weeks, this steady popular support for European integration is under numerous threats.

These threats will be enhanced if this window of opportunity closes for Georgia. For this reason, despite the fact that there are significant Western remarks / criticism towards the progress of democratization processes in Georgia in the West, granting “candidate” status now is vital to maintain and enhance societal mobilization in the fight for future democratization reforms.