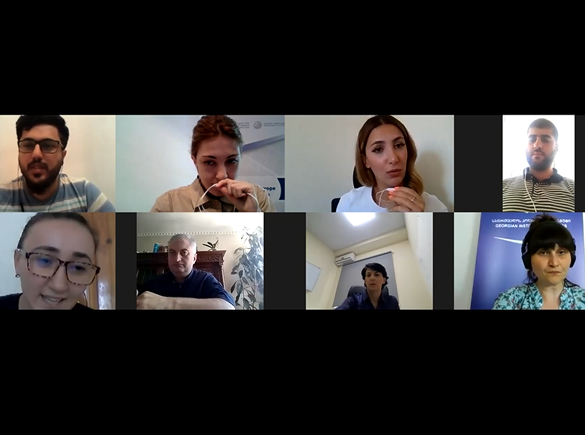 *The text is available in Armenian and Azerbaijani languages

On July 15, 2020, the Georgian Institute of Politics (GIP) hosted an online public discussion about “Civic Integration-related Progress and Challenges of Ethnic Minorities in Georgia.” The discussion, which took place using the online platform ZOOM, was held within the framework of GIP’s ongoing Erasmus+ Jean Monnet project “Promote and Act for Europe” financially supported by the European Union.

The working language of the event was Georgian and the simultaneous translation to Azerbaijani and Armenian languages was provided. The event targeted ethnic minority groups of Kvemo Kartli and Samtskhe-Javakheti regions and aimed at discussing the issues related to the integration process of ethnic minorities in Georgia. Different views were presented from the governmental and non-governmental perspectives as well as from the representatives of the ethnic minority groups themselves. The online discussion was moderated by the project coordinator – Salome Kandelaki. Participation in the event was possible upon the registration in Zoom.

The first speaker Elnur Alisoy, the local coordinator of the project “Promote and Act for Europe” in Kvemo Kartli region and the Captain of the youth organization “Salam Platform” discussed the priorities that the ethnic minorities of the  region have and put forward the key challenges they face in terms of civic integration.

In his speech, Elnur distinguished four key challenges: firstly, he addressed general problems related to the educational system in the country and the implications of these problems for civic integration of the ethnic minorities’ in Georgia. At the beginning, he stressed that the goals of the general education program are well-defined in official documents. However, it does not mean that it is well implemented in practice. According to Elnur, the situation in the schools that operate in non-Georgian languages is particularly problematic. The speaker has questioned the capability of the State to achieve the aforementioned goals.  The second issue that Elnur raised is the language policy. He emphasized that the 4+1 program gives the ethnic minority youth an opportunity to get involved in civic processes. However, he noted that this does not apply to middle-aged people and the representative of the older generation. He recalled the recently conducted poll in Marneuli region according to which almost 70% of population living in Marneuli have never addressed the local government with any issue – be it a complaint, request for information or any other reason. This is a serious problem showing the need for refinement of the language policy and, even more importantly, the need for providing services in a bilingual manner. During the  Covid-19 crisis, it became even more obvious that the government was not able to provide information to the ethnic minorities effectively. The third problem mentioned by Elnur was a low level of youth participation in solving  regional issues. He claimed that there are some instances of persecuting youth activists by the governmental forces. As the last challenge, he discussed the ideological situation in Georgia. On the one hand, he mentioned that in all official documents there is a special emphasis on the importance of civic nationalism but in reality ethno-religious nationalism flourishes in Georgia.

The second speaker Norik Gasparyan, local coordinator of the project in Samtskhe-Javakheti region and a freelance journalist, talked about the problems the Armenian ethnic minorities face in the region as well as the needs and challenges that they permanently face with regard to civic integration. Norik mainly agreed with the points that Elnur raised in his speech and once again mentioned the positive impact of the 4+1 program.n addition to this, he also mentioned another state program “Teach and Learn with Georgia” according to which the Georgian speaking MA graduates are sent to teach Georgian language in the schools of the regions populated by ethnic minorities. On the other hand, he brought  an example of a language barrier that ethnic minorities face in Javakheti while seeking public services. One issue that Norik also addressed in this regard is that as ethnic minorities are not able to receive public services in their own language, they switch to Russian, which Norik thinks is an important issue that civil society organizations need to take into account. . Norik also drew an emphasis on the fact that while talking about integration, we should also keep in mind that it is a bilateral process. In his final remarks, he recalled the information vacuum that the Armenian ethnic minorities faced during the Covid-19 crisis. Especially so, in the region of Kvemo Kartli, where ethnic Azerbaijanis are majority and Armenians  are represented as “minorities among minorities”. He explained that during the pandemic, the attitude of the State towards different minorities varied as the state mostly concentrated on spreading the information in Azerbaijani language. The only issue Norik did not agree with Elnur was the persecution of ethnic minority youth. According to him, the problem of persecuting youth activists is present in other regions as well and is not explicitly related to ethnic minority populated areas.

Ms. Tina Gogheliani, Head of the Civic Equality Department at the State Minister’s Office for Reconciliation and Civic Equality delivered her speech from the state perspective and talked about the implemented programs in support of the integration of ethnic and religious minorities in Georgia. Ms. Gogheliani addressed the benefits that the EU provides for Georgian citizens under the framework of Association Agreement. In the introduction, she noted that thanks to the consistent and need-based actions taken towards the improvement of civic integration during the past 10 years, Georgia reached concrete positive outcomes. She proudly stressed that in Georgia, there are many representatives of the ethnic minority youthng with higher education and good qualifications. As for the problem related to the lack of information,, she claimed that the state implements many information campaigns in the minority populated regions and the challenge of the low levels of informedness is decreasing. Apart from this, she also talked about civic and political engagement of the ethnic minorities and mentioned the Consultation Councils established in Kakheti and Kvemo Kartli administrations, which she named as one of the instruments for developing joint solutions on the local level. As a positive example, she named the state internship program in the public sector for ethnic minority youth beneficiaries of the 4+1, which was introduced in 2017. Ms. Gogheliani also drew participants’ attention to the fact that the geographic area of teaching the language has extended. However, she admitted that problems in this direction still persist. By the end of her speech, she happily mentioned that this is the first time when in the state document related to integration, the priority is given to the support of small communities of ethnic minorities and gender mainstreaming.

The last panelist of the online discussion was Mr. Koba Chopliani, Coordinator of the Council on National Minorities under the Public Defender’s Office. He spoke from the  prism of a human rights observer and assessed the country’s situation regarding the civic integration of ethnic minorities and talked about the perspectives of their equal participation in the EU integration process. Mr. Chopliani started his speech by making a short historical overview of the civic integration process in Georgia, which after the independence progressed with considerable hindrances.  However, at some point, the state and society realized the significance of this matter and some measures were taken.  Despite this,  activities were not planned effectively. He mainly talked about the quality of translation of school textbooks  and expressed his concern that these textbooks are not adapted to the needs of ethnic minorities.He also drew an emphasis on the media environment and the importance of providing information about current developments in Georgia in Armenian and Azerbaijani languages as well.

The speeches were followed by a Q&A session. The attendees were given the opportunity to ask critical questions and express their opinions. During the discussion, particular attention was drawn towards the youth persecution problem that Elnur raised and Ms. Chopliani promised to meet the ethnic minority youth and discuss this issue. Moreover, the representative of the Erasmus + Office in Georgia – Lika Ghlonti offered Elnur and Norik to meet and talk about the possibilities of increasing the involvement of ethnic minorities in the Erasmus + educational  programs.

The online discussion was recorded and the videos are available in Georgian, Armenian and Azerbaijani languages (see below).