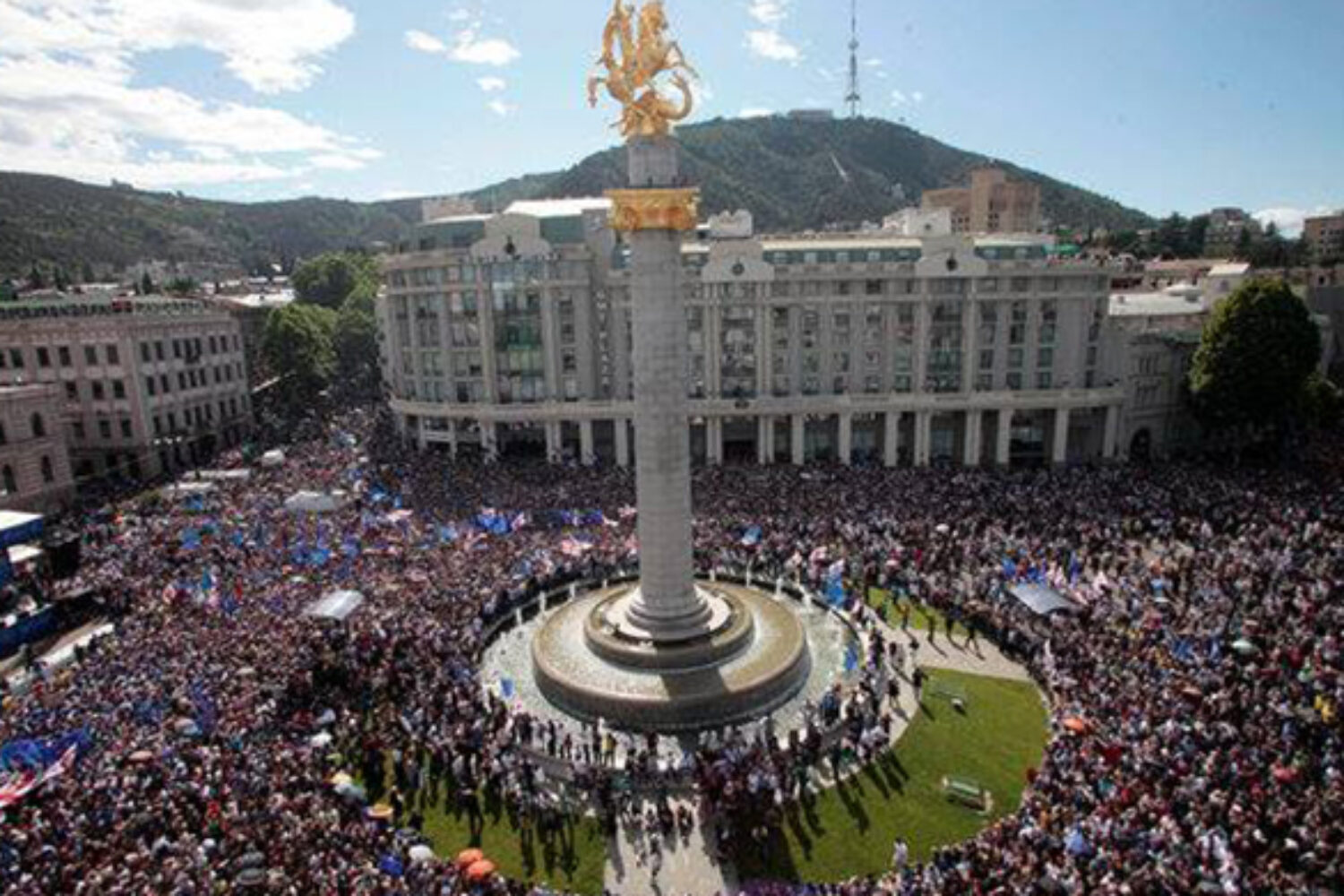 Western partners abandon Georgia and contribute to frustration and lack of prospects for Georgian rapprochement. Russian revisionism gets window of opportunity. After the first democratic change of power in Georgia in 2012, the country continued its Western course and democratic transition which was initiated by ex-president Saakashvili with the Rose Revolution in 2003. The forthcoming parliamentary elections on October 8, may usher a turning point. 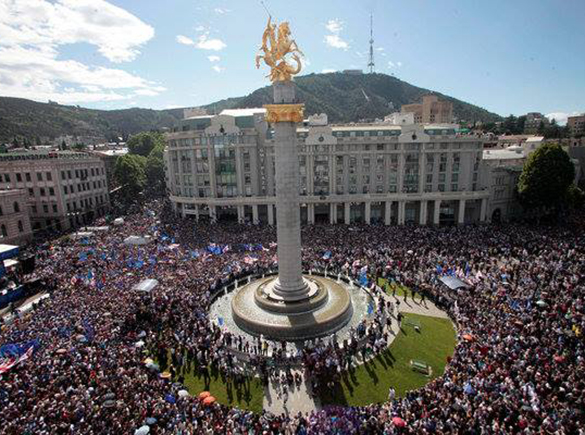 Apart from the continuation of western integration, one of the key points of the six party Georgian Dream coalition government led by oligarch Bidzina Ivanisjvili was to improve relations with Russia. This has everything to do with the de facto occupation of Abkhazia and South Ossetia by Russia since 2008: Georgian hopes these areas will return and the occupation blocks NATO membership.

Western integration in deadlock
Liberal pro-Western coalition parties Free Democrats and the Republican Party have dominated the foreign policy of the government which frequently expressed unrealistic expectations about an upcoming NATO membership that was offered at the NATO summit in Bucharest in April 2008. Knowing it is technically ready for it Georgia left no opportunity just short of demanding a membership, even without a Membership Action Plan. In recent years Ministers were more often in Brussels, Washington and Berlin than in Tbilisi.

To no avail since NATO is divided on a Georgian membership. The opposition mainly comes from Germany and France, just as in 2008, “not to provoke Russia”. That has given Russia a de-facto veto over NATO decisions which it invigorated in the summer of 2008 with military hand. The uncertainty about membership creates a security vacuum for Georgia. The hangover has only gotten worse since Montenegro has become the 29th member of NATO with less effort and sacrifice. Despite an official open door policy Georgia is experiencing a closed door. Attempts of NATO to keep Georgia satisfied with toys like the JTEC Centre near Tbilisi cannot hide that.

The Association Agreement with the EU which was signed in 2014 is fully operative since this year. A visa waiver to the EU which is instrumental for ease of doing business is within reach after the successful completion of the VLAP program. Nevertheless, EU member states such as Germany have been deploying a range of politically motivated delays over the last months, such as emergency brake clauses, connection with the Turkish visa liberalization and disputed German claims about Georgian criminal gangs. These political games lead to frustration and disappointment in Georgia because alongside NATO also the EU does not deliver on fulfilled requirements. The government is left empty-handed towards the voters as the effects of the Association Agreement are not trickling down yet. The population is getting doubtful whether it will ever benefit from the visa waiver. Russia plays this by frequently expressing the willingness to offer visa-free travel with Georgia.

Reckoning
The Georgian government is in a difficult position just before the elections. The special diplomatic channel with Russia made export of wines and Borjomi water possible, but it didn’t bring South-Ossetia and Abkhazia any closer. In fact, Moscow increasingly continued pulling these region afar from Georgia. Nor did the Prague meetings create any prospects on getting IDP’s back to their properties.

A weak socio-economic program without results, a devaluated currency following the Russian Ruble crash, pessimism about employment and the perception of rising crime after the amnesty for prisoners in 2013. This drowns out the improvements in healthcare, justice and media freedom which causes the majority of the population to conclude the country is heading in the wrong direction and turning its back on the government. The odd coalition with liberals, xenophobic nationalists and conservatives is partly to blame for failed social and economic policies. A marriage of convenience without a clear agenda except the united goal to break the power of the UNM party. They succeeded in the latter, but the disintegration of the coalition this year confirms the temporary friendship and Georgia gears up for an election which does not seem to get a clear winner.

The population has lost confidence the current political elite can solve the socioeconomic problems or bring the promised western integration closer. Half of the electorate does not know which party to vote for, and indicates none of the current are favourable. This raises ample opportunities for new parties and movements. An alliance of Orthodox and Conservative signature sees the closed doors of the EU and NATO as an opportunity to emphasize the importance of traditional Orthodox values for Georgia. The strong public support for Western orientation and the strong opinion of a Russian threat makes these parties cautious in explicitly rejecting the EU or NATO.

Traditional values as leverage
Under the influence of the conservative coalition partners, the government has been ambivalent in defending the position of minorities such as Muslims and LGBT people. On 17 May 2013, the International Day Against Homophobia IDAHO, an LGBT event was violently disturbed by an Orthodox clergy led mob. Authorities have been reluctant to give police protection to LGBT gatherings since that day. A year later the Orthodox Church in Georgia declared 17 May the ‘Day of the Family’ clearly to send a signal. This year the American extremist Christian World Congress of Families (WCF) held a five-day conference in Tbilisi during IDAHO. Foreign delegates participated in an anti-gay march. The WCF’s mission is “to protect the natural family based on marriage between a man and a woman” and it has ties to Russian oligarchs who are close to the Kremlin.

A citizens’ initiative which passed the required 200.000 signatures has been submitted in July for a referendum on the constitutional definition of a family as a marriage between a man and a woman, after a Parliament vote failed. President Margvelashvili has indicated to use his veto to block the referendum after which the initiators announced protests and starting a procedure to get the President removed from office. Protection of Orthodox Christian family values has thus suddenly become part of the election campaign to win undecided and disillusioned voters.

This development means that Georgia is de facto departing from the European progressive agenda without explicitly saying so as public support for close relations with the West is strong. The bizarre and unreal attack on the vegan and alternative Kiwi Cafe in June in Tbilisi where ultra-nationalists threw sausages symbolizes this regressive development in Georgia, where liberal progressive (life) attitudes are increasingly and aggressively opposed by traditionalists to prevent “civilizational suicide”.

Response to Russian revisionism
Through the Orthodox Church, civil society and the Russkiy Mir program Russia is trying to undermine support for liberal and progressive Western development in its periphery, in what it calls its exclusive backyard. Conveniently targeting  groups of detached and disappointed voters.

The EU should prioritize its ambitions regarding the Neighbourhood Policy, the Eastern Partnership. NATO will have to provide greater clarity and openness to the Georgian citizens about the prospect of actual membership. In addition, the Western partners will have to show the Georgian people that it gets what it deserves based on performance and achievements. This is not only fair game, it is also limits the playing field of counterforces. Only this way a healthy equivalent trustful relationship can be developed, maintained and resist Russian revisionism.