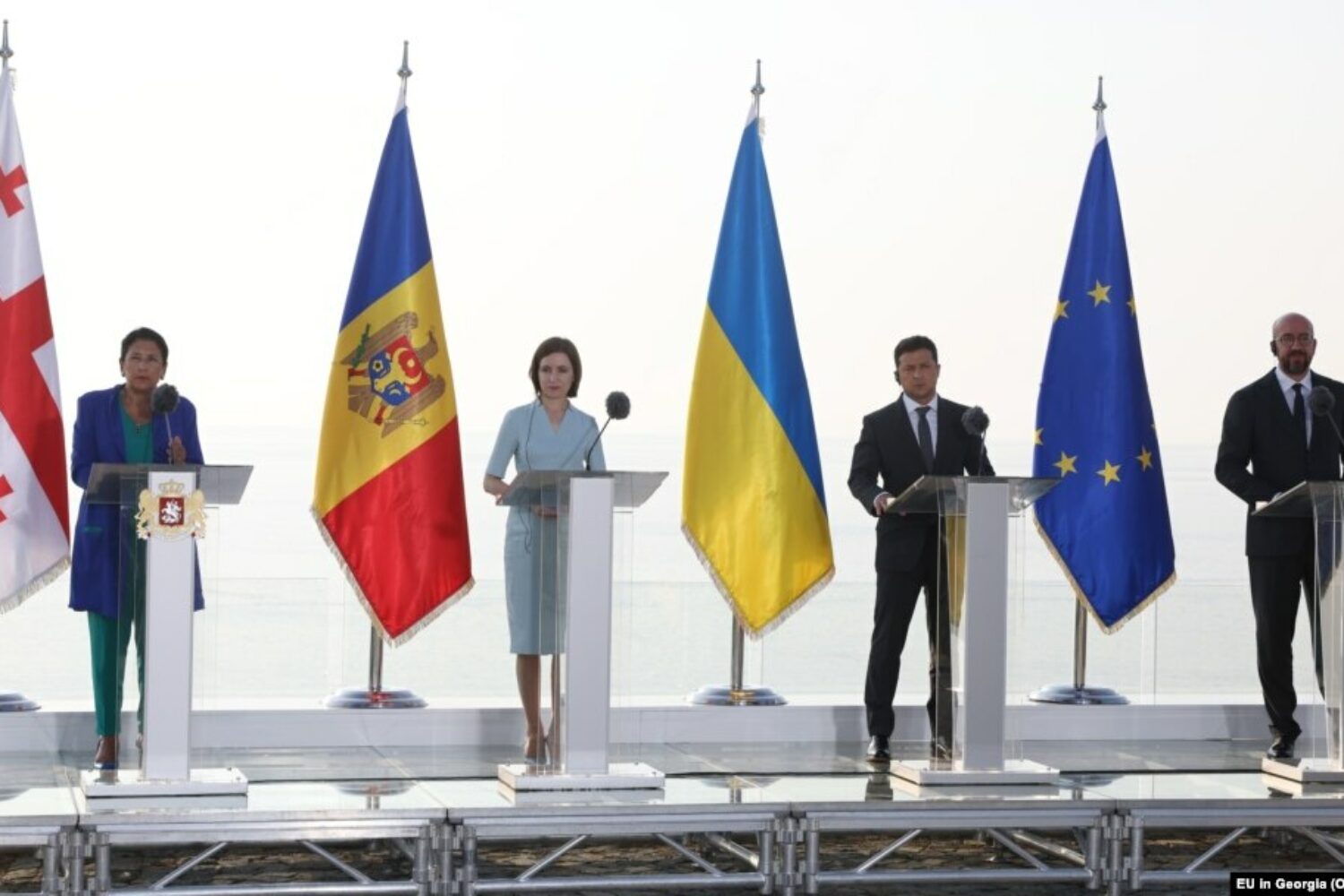 GIP has joined the open letter by CEPS “Responding to Putin’s invasion of Ukraine”. The letter addresses European Union’s leadership in support of granting candidate status for Ukraine Moldova and Georgia – and lists specific recommendations to how EU policy towards each of the three states should be adapted.

Responding to Putin’s invasion of Ukraine – Candidate status for Ukraine, Moldova and Georgia

On 24 February Russia began its invasion of Ukraine. On 28 February President Zelensky submitted a formal request to accede to the EU. On the same day President von de Leyen declared “They (the people of Ukraine) are one of us and we want them in”. Also on the same day, the leaders of Bulgaria, Czechia, Estonia, Latvia, Lithuania, Poland, Slovakia and Slovenia, later joined by Croatia, Hungary and Romania, published a declaration favouring for Ukraine an immediate accession perspective.

On 1 March Georgia submitted its formal request to accede to the EU, followed by Moldova on 2 March.

This is now a totally new situation. The requests from all three states are presented as matters of extreme urgency. The EU’s normal accession process is a long and arduous course. But this is not a normal situation and calls for an immediate and strategic response beyond the sanctioning of Russia.

We salute President von der Leyen’s short but clear and categorical statement about welcoming Ukraine into the EU. We note the Resolution of the European Parliament of 1 March, including calling “for the EU to work towards granting EU Candidate status to Ukraine …”, but consider that to be an unduly weak formulation, which lacks a sense of urgency.

Due to the big investments made since 2014 by Ukraine, Moldova and Georgia in implementing the three Association Agreements including DCFTAs, whose chapters are the same as for the existing enlargement process, all three states are potentially qualified for ‘Candidate’ status, as has been justified by objective facts[1].

Ukraine, Moldova and Georgia states should thus be fully integrated into the existing enlargement procedures. However these procedures and methodology are themselves in need of thorough revision and upgrading, for which a seriously worked out proposal has been published, advocating a process of ‘Staged Accession to the EU’[2]. This proposal now deserves consideration by the EU institutions and member states in the interests of both the Western Balkan and Eastern European states.

We address specific recommendations to how EU policy towards each of the three states should be adapted.

To Ukraine. While Ukraine is in a war of survival and is partly occupied by Russian forces the normal enlargement procedures cannot be activated. Yet, the point of granting Candidate status now is of paramount importance to signal the EU’s fundamental support and to give hope for the better future that can lie ahead. Current operational priorities are to help Ukraine fight and survive, and to support the huge and growing number of refugee women and children arriving in EU member states. For the post-war situation a massive reconstruction and development programme should be prepared.

To Moldova. Since the presidential elections of 2020 and the parliamentary elections of 2021 Moldova’s new government has established an excellent political basis for progress along the enlargement procedures. The country is none the less facing several huge challenges simultaneously, and needs mounting support from the EU, conditional on decisive reform measures. For this purpose Moldova should be invited by the EU to set out a comprehensive reform strategy in the context of its new 5-year Association Agenda to be the basis for ‘more for more’ support.

To Georgia. Georgia has advanced well on many commitments under the DCFTA part of its Association Agreement, but has disappointed over failure to fully implement the conditions set out in the political agreement mediated by President Michel in April 2021. Its support for Ukraine at war has been tepid. Normal enlargement procedures should be strictly conditioned on Georgia taking credible steps to improve its democracy and rule of law and moving more broadly into line with the EU’s foreign and security policy objectives.

[1]Detailed analysis shows that in terms of approximating EU laws and norms the three East European associated states may be ranked alongside the four Western Balkan state that have been granted Candidate status, and way ahead of the other two Western Balkan states that are not yet Candidates. https://www.ceps.eu/ceps-publications/balkan-and-eastern-european-comparisons/

[2] ‘A Template for Staged Accession to the EU’, https://www.ceps.eu/ceps-publications/a-template-for-staged-accession-to-the-eu/