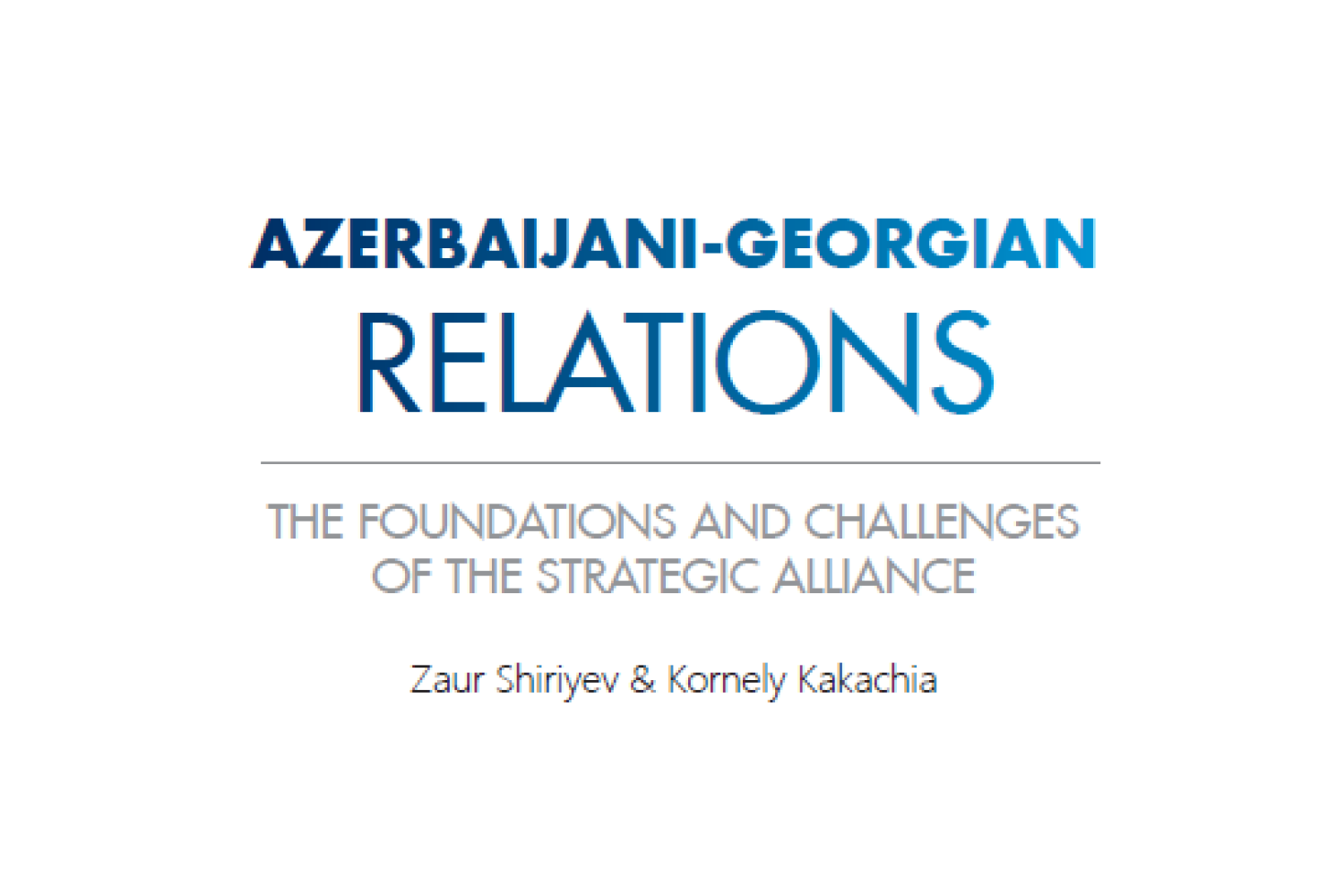 Azerbaijan and Georgia have a centuries-old relationship, and had similar experiences throughout the 20th century. Both countries gained independence in May 1918, and after Azerbaijan lost its independence in 1920, Georgia survived only one year more.The joint efforts and mutual support during the 1918-1920 period included a joint lobby for international recognition. In 1919, the France-Caucasus Committee was established in order to develop economic relations between France and the republics of Transcaucasia. In the same year, the Azerbaijani and Georgian governments signed an agreement with US Congressman William Chandler to promote their opinions in the West and to get support from the United States. Furthermore, both countries cooperated at the Paris Peace Conference and signed a defensive military pact in 1919. Boosting economic cooperation was the founding principle: both countries needed an enduring alliance to survive independence and build prosperity. The words of Azerbaijani intellectual and statesman Yusif Vazir Chamanzamanli, writing in 1919, clearly describes this principle of enduring support at the regional and international levels: the friendship between Georgia and Azerbaijan has benefits for both sides. And it is undoubtedly true that both would like to be independent. In this case if any fear emerges for Georgia it may also damage Azerbaijan. Because the independence of these two countries is mutually dependent, such if one of them lost its independence, the other will be forced to lose it too. And we have to work together to defend the Caucasus Mountains between the Black Sea and Caspian.1

Beyond this principle, which was developed during the first independence period, the other founding principle of the strategic alliance also dates back to this period. This second principle was based on “peace and stability initiatives and ignoring expansionist wars.” Although in 1918-1919 both countries had unresolved territorial issues, they never fought each other, and also bilateral peace and stability was promoted through the signing of peace agreements with each other and with the Ottomans. Looking to the defensive pact between the two countries, to which Armenia was also invited to join, it is clear that building peaceful relations and defending the region from foreign invasions were key factors for both countries. This kind of approach also features in a speech on given on 27 June 1919 before the Azerbaijani parliament. Azerbaijan’s Minister of Foreign Affairs Mammad Yusif Jafarov, after paraphrasing the Azerbaijan-Georgia Defence Pact, emphasized that: Georgia and Azerbaijan may lose their independence. But they will live in the neighborhood together. This agreement will hold great efficiency and promise for the two neighboring republics. In Nicholas’s [Tsar Nicholas II] time we saw that the Caucasus nations were not capable of coexisting, and in fact they wanted to annihilate one another. This agreement shows that if the nations in Caucasus will be exposed to dangers in bad situations, they can put aside their domestic issues and coexist as equals or die.2

Further, even the making of war was only ever conceived of as a means of defending the homeland—as seen in the epic Azerbaijani-Georgian love story Ali and Nino. The hero of novel, Ali (Khan Shirvanshir), says: “There was no enemy in my country. No one threatened Transcaucasia’s steppes. Therefore this war [World War One] was not my war.”3

Indeed, both countries’ short-lived independence did not instantly guarantee cooperation in all areas, and there were some problems in bilateral relations. But while there were periods of ups and downs, this did not damage the overall sense of a strategic alliance. During the Soviet era, they enlarged cooperation in many fields, and then following the dissolution of the Soviet Union they started to cooperate as independent countries.

In this light, after two decades of independence, an appraisal of the historical and present essence of Azerbaijani-Georgian relations both illustrates and proves the words of former US President John F. Kennedy. When he uttered these words, he was not of course speaking of the Azerbaijani-Georgian partnership, but they are apt nonetheless: “geography has made us neighbors. History has made us friends. Economics has made us partners, and necessity has made us allies.”

Judging two countries relationship based on JFK’s quote, we can see that after the collapse Soviet Union—the “prison of nations”—Azerbaijan and Georgia became “prisoners of the three Gs”: geography, geo-economics and geopolitical competition. However, the two countries turned those obstacles into advantages with good neighborly relations. Thus Azerbaijan gained direct access to the Black Sea; the Baku-Tbilisi-Ceyhan (BTC) oil pipeline and the Baku-Tbilisi-Erzurum gas pipeline were built; the Baku-Tbilisi-Kars railway will soon be completed; and, most importantly, the Azerbaijani-Georgian relationship was not merely born of “geopolitical necessity” or the legacy of historical destiny but goes deeper, as we indicated before. Still both countries today identify the relationship as the “Caucasian Tandem”, a “time-tested Friendship”. And importantly, each country’s National Security strategy paper identifies the other as a “strategic partner”.

When the 2008 August Russia-Georgia war broke out, and Azerbaijan continued to support Georgia despite the Russian threat, Azerbaijani MP Asim Mollazade said, in reference to solidarity between the two countries, that “When Russia switched off the lights a number of times in Georgia, Azerbaijan helped to switch them back on.”4 Overall, the continued high-level improvements in bilateral relations have demonstrated that for Azerbaijan, the “Geo” in Georgia is always stronger than the “geo” in “geopolitics.”

The strategic alliance has developed on an equal basis; Georgia has enabled Azerbaijan to deliver its energy resources to the European market, acting as a “door” for Azerbaijan’s oil and gas. Georgia’s role as a key transit country has made it an important bridge in the East-West axis. Georgia’s support for this alliance has not been limited to serving as an energy transit route. At the international level, Georgia has a good reputation in European capitals and Washington, enabling Tbilisi to bring regional problems to the agenda of Western decision makers. In this way, it has provided a great service not only to Azerbaijan, but to all regional countries. In 2008, the Russia-Georgia war demonstrated both Georgia’s importance to regional security, and also the negative impact of the continued fragility of the regional security situation.

In the post-2008 period, the language used to describe the situation in the Caucasus changed from “after the collapse of the Soviet Union” to “after the August war”. This had an impact on ongoing energy and gas projects, as well as the trilateral level strategic alliance between Azerbaijan, Georgia and Turkey. In 2008-2009, Turkey’s attempts at normalizing relations with Armenia and opening the border created tension between Azerbaijan and Turkey, which in turn had a negative effect on Georgia. In same way, after the October 2012 parliamentary elections in Georgia, initial statements by the new Georgian government gave rise to concern and frustration in Azerbaijan, leading to some minor questioning of the bilateral strategic alliance. Therefore, taking into account the situation prior to the August 2008 war, and the government change in Georgia, it seems that both countries have needed to take a closer look at the more fragile areas of cooperation, and to focus on these areas with a view to institutionalizing the ties.

The positive outcome of this is that in the last two years in particular, both Azerbaijan and Georgia have learned from the developments described above, and are now looking forward and working on the institutionalization of key areas of cooperation (economy, tourism, military, etc.), as well as institutionalizing trilateral cooperation with Turkey.

This report consists of three parts. The first seeks to identify the level of cooperation across various pillars, including politics, economy, energy, tourism, business, education, media, cultural, military and defense. The second part discusses Georgia’s Azerbaijani community and Azerbaijan’s Georgian community, and how they affect political cooperation. The third part draws some conclusions, and provides recommendations for both governments, as well as suggestions for action at the regional and international levels. The authors have used a number of sources for data and graphics. All photographs are original.

This report provides an overview of different areas of cooperation, informed by historical developments. The authors examine the above mentioned issues in order to assess the terms of a healthy Azerbaijani-Georgian relationship. Such a relationship will not only help to develop both countries’ interests in the region, but could also be important for any country with traditional or strategic interests in the Caucasus and Central Asia region.