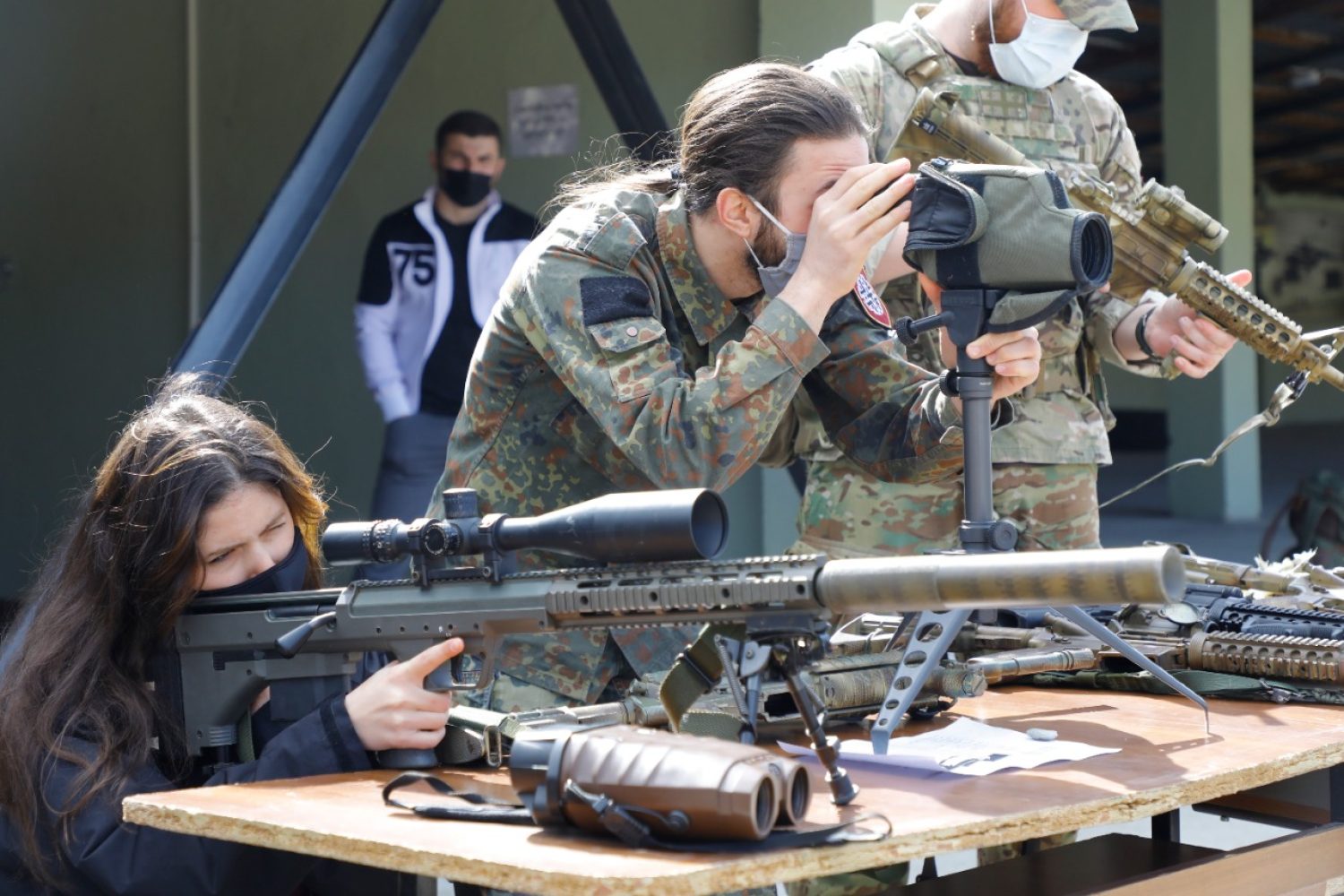 Ukrainian society has since 2014 shown an impressive level of resistance in response to Russia’s aggression, and especially so following full-scale invasion in 2022. Thus, strengthening civic resilience has become a leading component of Western security architecture. The civilian element in defence is an important part of NATO’s strategy – equipping the population with information on defence actions and plans for corporation between military institutions and power structures, and giving practical training. Therefore, strengthening resilience through civic willingness should be among Georgia’s priorities.

This is especially the case as Russia is seen as a national threat for Georgia and recognised by the Alliance as the main challenge for global security.  With that in mind, Georgia should increase the compatibility of its defence strategies with those of NATO. Thus, it is important to explore in which fields Georgia could work and share experience with the Alliance with the objective of strengthening civic resilience in the country.

Strategic Dimension: Total Defence in Georgia and Collective Defence in the Alliance

NATO believes that the military resilience of its member states depends significantly on the resilience of society and its ability to deal with crises, including that of military attacks. Strengthening civil defence is not, as yet, treated with appropriate importance in the strategic documents covering Georgia’s defence. However, it is becoming more and more necessary for civic resilience to be a proper component in defence and other strategic documents.

In NATO’S strategic vision one of the main areas for increasing resilience in general is the development of Civil-Military Cooperation (CIMIC) and Civil-Military Interaction (CMI), and is based on a plan for integrating the civilian component at the tactical and operational levels of defense. In this direction, the strategic documents of the Alliance offer definitions of the level of interaction between military and non-military actors and various scenarios and activities, so that society as a whole becomes resilient to possible military, hybrid or other types of crises.

According to the vision of the Ministry of Defence of Georgia, civil defense, as a component of civic willingness, is a constituent part of Total Defence. Civil defense refers to: the provision of civil security, cyber defence at times of war and peace, and the moral and psychological stability of the population. The Total Defence strategy includes some references to military and civilian cooperation.  However, it is necessary for the state to offer a more fundamental vision to society on Georgia’s strategy due to the vital importance of the issue. Therefore, tools such as open discussion formats for non-member partner states in the NATO Responsiveness Committee could, perhaps, be strengthened.  It would be a significant step forward if the Substantial NATO-Georgia Package reflected as a component the strengthening of civic resilience as a new leading area for cooperation between the Alliance and Georgia. Especially, considering the fact that, following the 2022 NATO Madrid Summit, it is planned to add new issues to the original 2014 NATO-Georgian Package.

The integration of the civil and military segments of society in the western space is viewed mainly from two angles: co-existence and cooperation. At field level, in terms of training and necessary equipment, work can be activated by sharing NATO’s already existing experience and by direct, practical work with the Alliance – joint training on the territory of Georgia, adding relevant political units from NATO to Tbilisi, etc.

The Trident Juncture Exercise 2018 (TJE) was one of the important experiences in this direction. It was held in Norway in 2018 and was the most comprehensive NATO training since the collapse of the Soviet Union. It was unprecedented in terms of the number of participating states (31 including non- member partner countries), and training included a civilian dimension along with a military one. Maximizing the integration of these training experiences in field training for the population could be particularly important, considering that the TJE was focused specifically on responding to threats from Russia. Equipping the Georgian population with specific knowledge and skills through such experience could be particularly effective. Georgia, which participated in TJE, could work on developing collective defence scenarios and modelling specific crises, especially in its border regions.

In this regard, it would be important for Tbilisi to increase its work on planning joint military-civilian training with NATO. Georgia has the experience of regular participation in Joint Combat Exchange Training (JCET) as well as being a host – JCET also included a civic training component.  However, it is important for Tbilisi to work towards increasing the frequency and scale of such integrated training with NATO and to plan projects tailored to the specifics of Georgia.

At the same time, the role of voluntary organizations, the extent and form of involvement, provision of support and integration into the implementation of Total Defence are all becoming more important. Voluntary organizations operating in the country, have the potential, based on their own teaching methods, specificity and years of experience, to fully cover the civil sector and the volunteer space and to ensure that they are trained, strengthened, and equipped with the appropriate skills to support the defense forces, if necessary, raising the levels of civil responsibility and fighting spirit. From this point of view, it is worth mentioning the reinforcement   of public organizations by the state, such as General Mazniashvili’s Youth Legion (GMYL), which offer citizens various courses and trainings, so that they acquire the skills and knowledge to deal with crises.

GMYL’s work is independent (although it periodically benefits from the support of the Ministry of Defence in the framework of Memorandum) and provides useful experience in terms of cooperation between military-defence and the public. Sharing the experience of NATO member states in terms of organizing field training for various segments of civil society, especially for residents of settlements near the occupation line, has great importance because of the hybrid threats raised by Russia.

Teaching the use of the state budget and training-educational resources should be an important element of the work, as should sharing the NATO candidate tests. The Psychological Defence is one of the most important components of defence strategy of NATO member country Estonia – this involves the public’s perception of the country’s main threats and defense capabilities. The Estonian government is actively working to develop strategic communication regarding the waves of disinformation coming from Russia, Russian-language information, cyber and hybrid attacks, and the policies based on Estonian values. From this point of view, it is part of the state’s policy to increase the public’s trust in state and military institutions responsible for defense, which has also become an urgent issue for Georgia.

The Georgian army has traditionally been trusted by the public more than other institutions (Graph 1), therefore, there is probably a greater receptiveness in Georgian civil society of the concept of successful civil-military cooperation. 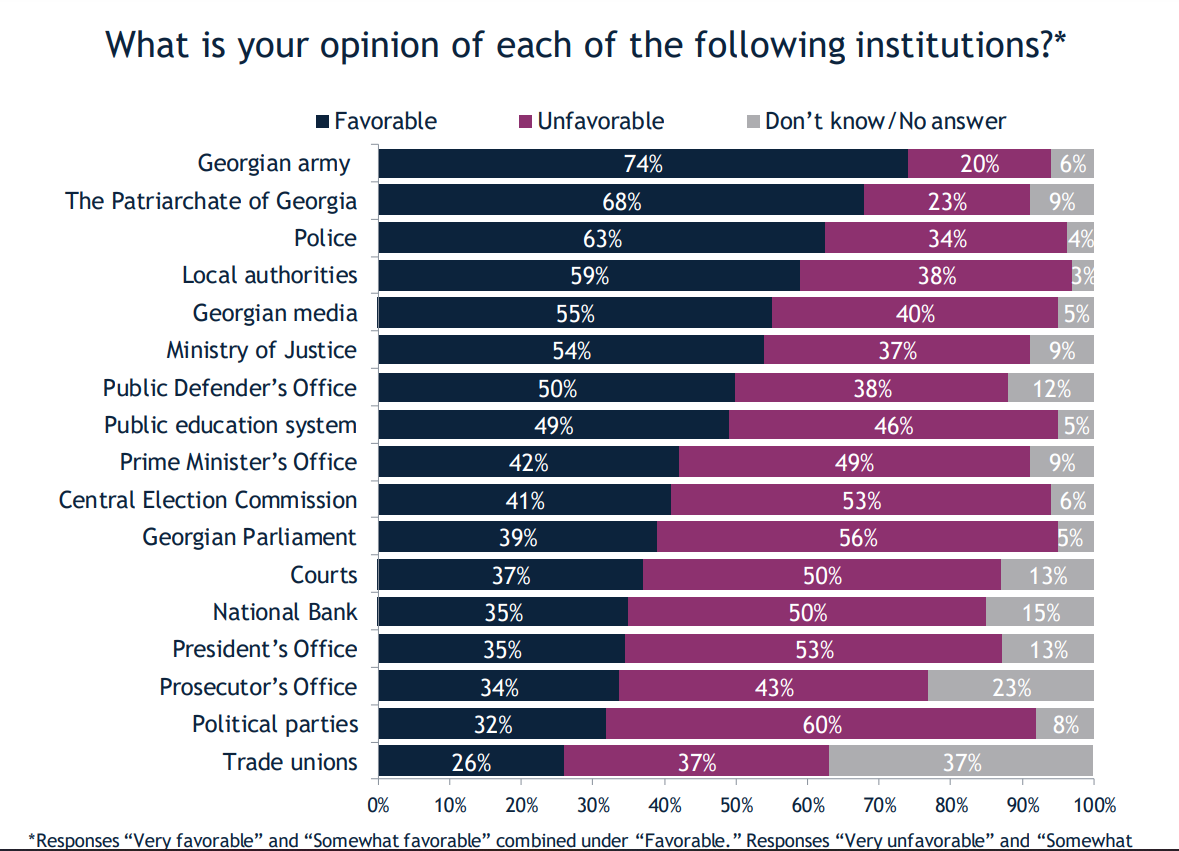 In addition, in terms of educational partnership with NATO, the granting of NATO accreditation to the Defence Institution Building School (DIBS) was definitely a significant step forward. This precedent, from an educational point of view, created a basis for Georgia to increase the effectiveness of civil society through the dissemination of military knowledge. The work of the school, at this stage, is mainly focused  on those who are directly involved in the management and development of the security system. However, the school can work towards the strengthening of civil defence in the educational direction by expanding in its curriculum civil defence components and its target audience.

The development of civic resilience in terms of education and awareness will contribute to the inclusive nature of the resilience strategy, which, according to analysts, should be one of the main mechanisms of the state’s resilience strategy: The strategy should include points of civilian coordination with the military without jeopardizing national security, which requires that civilians should be sufficiently well informed and aware.

Civic and Military Stability: Cooperation Between NATO and Georgia

To create resilience, it is important for NATO that military knowledge, skills and strategic vision are   also available to the civilian segment of society, so that it is informed to deal with any kind of crisis effectively.  The Alliance is actively working on strategic levels and in the field to strengthen readiness in this direction. It is also necessary for Georgia to work on increasing its compatibility.

It is necessary for bilateral programs with NATO and Georgia’s own plans adapt and expand in three main directions: At the strategic level, Georgia’s defense vision should be made as similar as possible to NATO’s collective defense approach by integrating the civilian segment into the country’s strategy. At field level, Georgia should work with the Alliance to activate joint training, promoting the development of CIMIC standards. Finally, to increase the level of education and awareness, Georgia can use the educational institutions and programs functioning within the framework of the NATO-Georgia Package and make them more accessible to civil society.