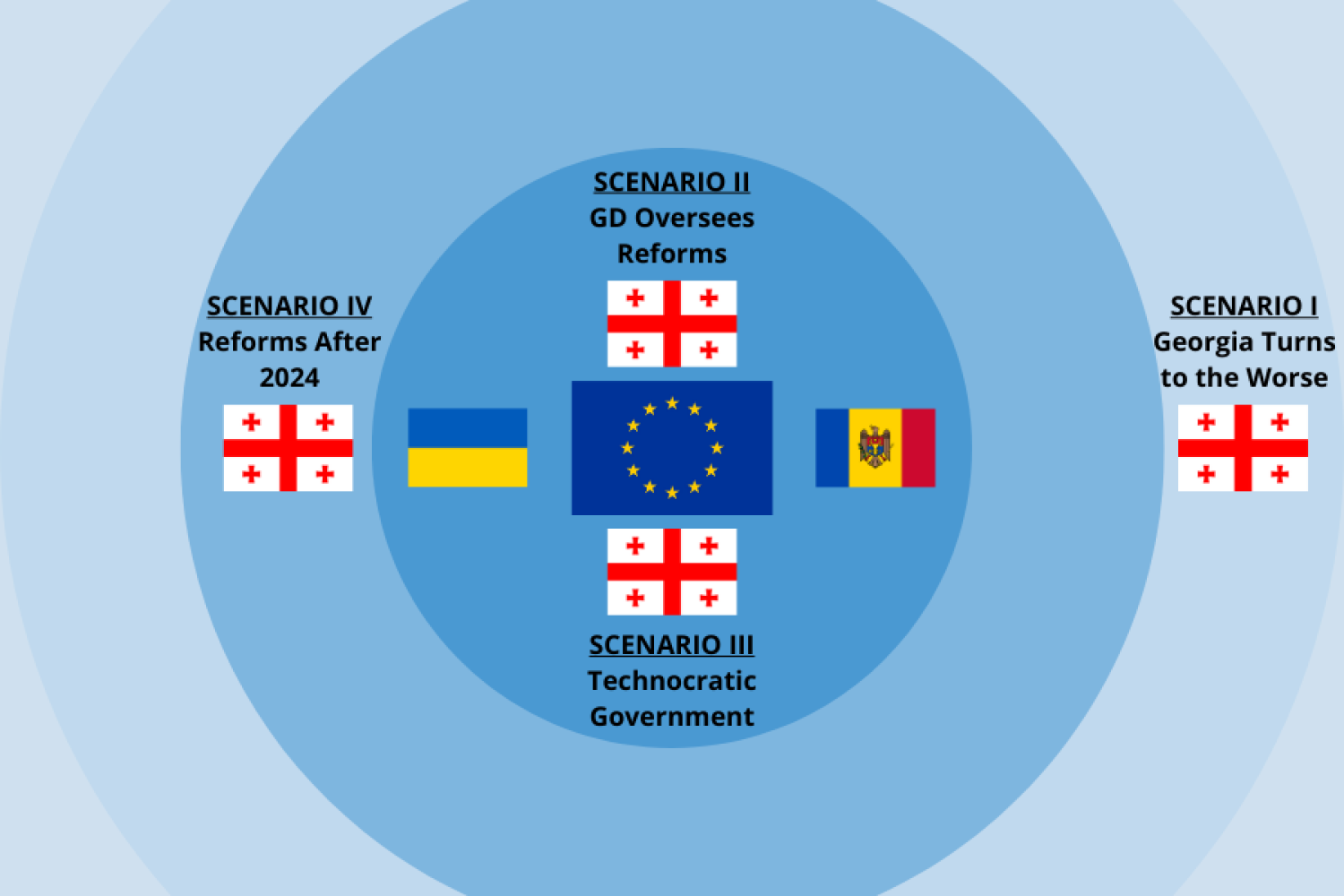 The heavy toll brave Ukrainians are paying daily due to the Russian invasion has opened a historic window of opportunity for the Associated Trio countries. It offers a chance to escape the limbo of uncertainty over membership and move forward toward      European integration. Unfortunately, unlike Ukraine and Moldova, Georgia has not been able to take full advantage of this window of opportunity. As expected, the European Council followed the European Commission’s recommendations to grant candidate status to Ukraine and Moldova and pose additional conditions for Georgia to qualify for the status. In the historic decision, the EU recognized Georgia’s European perspective and gave the green light to its future membership. However, the decision of the European Council was perceived by many pro-European Georgians as a missed opportunity. This perception is rooted in the fact that Georgia used to be a frontrunner in the Eastern Partnership project and it is now one step behind the rest of the Associated Trio. Georgia’s actions over the next couple of months will determine if it will finally take advantage of this rare window of opportunity to make serious progress integrating into the EU. The following analysis offers four possible scenarios on how the situation in Georgia might develop during this crucial period. It explores the possible implications of these scenarios on Georgia’s democratization process and gives recommendations on how to expedite Georgia’s European integration and catch up with the other Associated Trio countries.

The First Scenario – Stalemate continues – Georgia turns to the worse

In the least desirable scenario, neither external nor internal pressure pushes the ruling party toward a substantially reformed agenda. In this scenario, Georgian political leadership will remain defensive and unwilling to compromise its own political agenda. This may lead to a deeper political crisis and a repressive response from the government. To be more exact, if the ruling party does not work closely with all stakeholders to implement the reforms required to fulfill the European Commission’s (EC) recommendations, the wave of protests in Georgia will likely increase substantially. This might lead to the use of coercive measures against the public, including a more authoritarian government. If events develop in this way, there is also a possibility that the ruling party will manage to remain in power by undemocratically suppressing protests and cracking down on opposition.

This scenario will eventually lead to the international isolation of Georgia from its Western partners and allies and could push the country closer to Russia. As a result of isolation, the political leadership might end up seeking an alternative geopolitical pole of attraction. Subsequently, it will make Georgia even more vulnerable to influence from illiberal regional powers and reverse the progress made toward democratization over the last two decades. If that happens, Georgia might end up on the other side of the new Iron Curtain and remain yet another failed post-Soviet state for decades to come.

In this scenario, the current composition of the Georgian government succumbs to pressure from Georgian society and starts prioritizing progress on all the EC’s preconditions. The Georgian Prime Minister, in comments on the recommendations, stated that the government was willing to start working on the reforms as soon as possible. The Georgian Dream has already proposed creating a special group to oversee the process. Such willingness and enthusiastic statements are a response to pressure from the Georgian public. According to recent NDI opinion polls, 82% of participants support Georgia’s European integration (Figure 1). 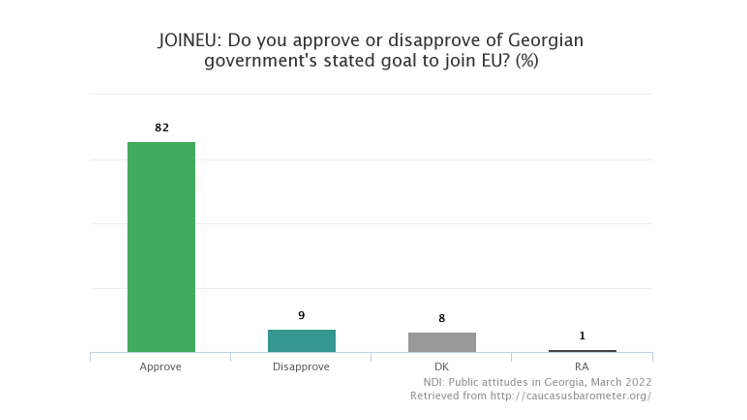 Strong public support for Georgia’s European integration along with mass protests could potentially put pressure on the ruling party to backtrack on its radical rhetoric and illiberal moves. Nonetheless, considering the Georgian Dream has failed to fulfill the April 19 agreement mediated by Charles Michel, the President of the European Council—not to mention the Georgian Dream appointing judges despite Western criticism—this scenario seems rather unlikely. The ruling party appears to lack both the political will and the capabilities to carry out reforms that eventually could lead to a more democratic environment involving power-sharing arrangements with the political opposition. The majority of opposition politicians also distrust the ruling party.

What also makes this scenario less probable is that the government does not fully agree with the EC’s recommendations and has a fundamentally different view of the political reality in Georgia compared to the opposition and civil society. Although Prime Minister Gharibashvili stated that the government is even more motivated to work on these reforms after the European Council decision, he previously called the recommendations unfair, casting a shadow over Tbilisi’s willingness to follow them.

The Third Scenario – provisional government of national accord

The third possible scenario predicts that the government will fall short in delivering any substantial changes during the next couple of weeks, leading to increased societal pressure and protests. The organizers of the protests have already announced that they are calling for the Prime Minister to resign within a week and the creation of a national accord government, which would oversee the implementation of all the EC’s recommendations.

In this scenario, consistent and large-scale protests might pressure the government to yield and resign. This may lead to a formation of a provisional government that, according to the leaders of the protest movement, would temporarily unite policy professionals, technocrats and representatives of the expert community. This provisional technocratic government’s focus could be, with internal and international support, conducting reforms that would bring Georgia closer to candidate status. It’s also not excluded that the implementation of a provisional government may also imply preparing the country for fair snap parliamentary elections.[1]

The probability of such a scenario depends heavily on the extent to which political forces in the country are willing and ready to put aside their personal ambitions and cooperate with the Georgian public and civil society. In this scenario members of the provisional government, as envisioned by the protest movement, would be selected based on a consensus between civil society, opposition parties, and the ruling party. It is here that cooperation between political actors, the current ruling party in Parliament, the President, and international partners is critical. During this transitional period, the active involvement and participation of international partners is necessary to ensure that the process goes smoothly and aligns with European standards.

The Fouth Scenario – strategy for the government after 2024 elections

The fourth possible scenario that could potentially take place considers how achievable the EC’s recommendations are within a specific period of time, whether that be months or years. The problems outlined by the European Commission involve deep structural issues that have been accumulating for years. Therefore, it is quite likely that if Tbilisi fails to implement reforms within the next six months, the European Commission’s recommendations may transform into a long-term strategy for the government that will come to power following Georgia’s parliamentary elections, scheduled for 2024. Meanwhile, the European Union and other international partners might be interested in preparing Georgia for fair and democratic parliamentary elections, the results of which would be accepted by all parties regardless of the outcome.  Georgia’s Western partners are keen on promoting substantial reforms in the country since if things stay as they are (one-party dominant system, 5% threshold, informal governance, and polarized parties and media environment), it is more likely that the political field in Georgia will remain unstable and uneven. In this scenario, the implementation of these reforms and EC suggestions is more likely to lead to a coalition government with a more evenly distributed power structure following the 2024 parliamentary elections.

In conclusion, this scenario is less optimistic that the current Georgian government will successfully carry out reforms by the December deadline. Rather, it forsees a series of events in which the country prepares for the 2024 parliamentary elections to ensure that the political field remains less polarized and more open for cooperation-based politics. The incumbent government also needs to engage in a good-faith dialogue with multiple political forces, civil society representatives, and business leaders while designing and implementing key reforms.

The political situation in Georgia remains unstable and rather unpredictable. Georgian society as well as the international community must be prepared for any unexpected development or even more prolonged political crisis or stalemate. The situation might develop according to any of the four possible scenarios outlined above. Regardless of how events develop, it is important that the country remains committed to European integration and that the wider public is engaged in the process. Not receiving candidate status was a missed opportunity for Georgia but all is not yet lost. Depolarization and consensus-based politics will be vital for the successful implementation of all the EC’s recommendations.

Whether a technical government of national accord is formed, snap elections held or the current ruling party stays in power, it is vital for all sides to abandon radical rhetoric and move toward consensus-based politics. This could involve creating a special task force including representatives of civil society, political opposition, the business and academic community, and the media, who will oversee the implementation of reforms. Right now, domestic pressure from civil society and Georgian citizens on the ruling party is critical to ensure the government remains committed to the democratization agenda. No less important is the role of the international community to help the country in this process. There are already propositions made both by the ruling party and the civil society in this direction. However, considering the current level of political polarization and antagonist discourse—as well as the level of distrust between political actors and international actors’ limited appetite to engage in the country’s political processes—it is unclear how the country will manage to overcome the current political divide.

In closing, Georgia is, once again, facing a period of uncertainty. The current unsustainable stalemate is pushing the country toward international isolation and a never-ending cycle of instability, which will only benefit Russia and alienate Georgia from the Western world. It is critical for Georgia to act quickly and fast-track political reforms to ensure its uninterrupted path toward Euro-Atlantic integration.