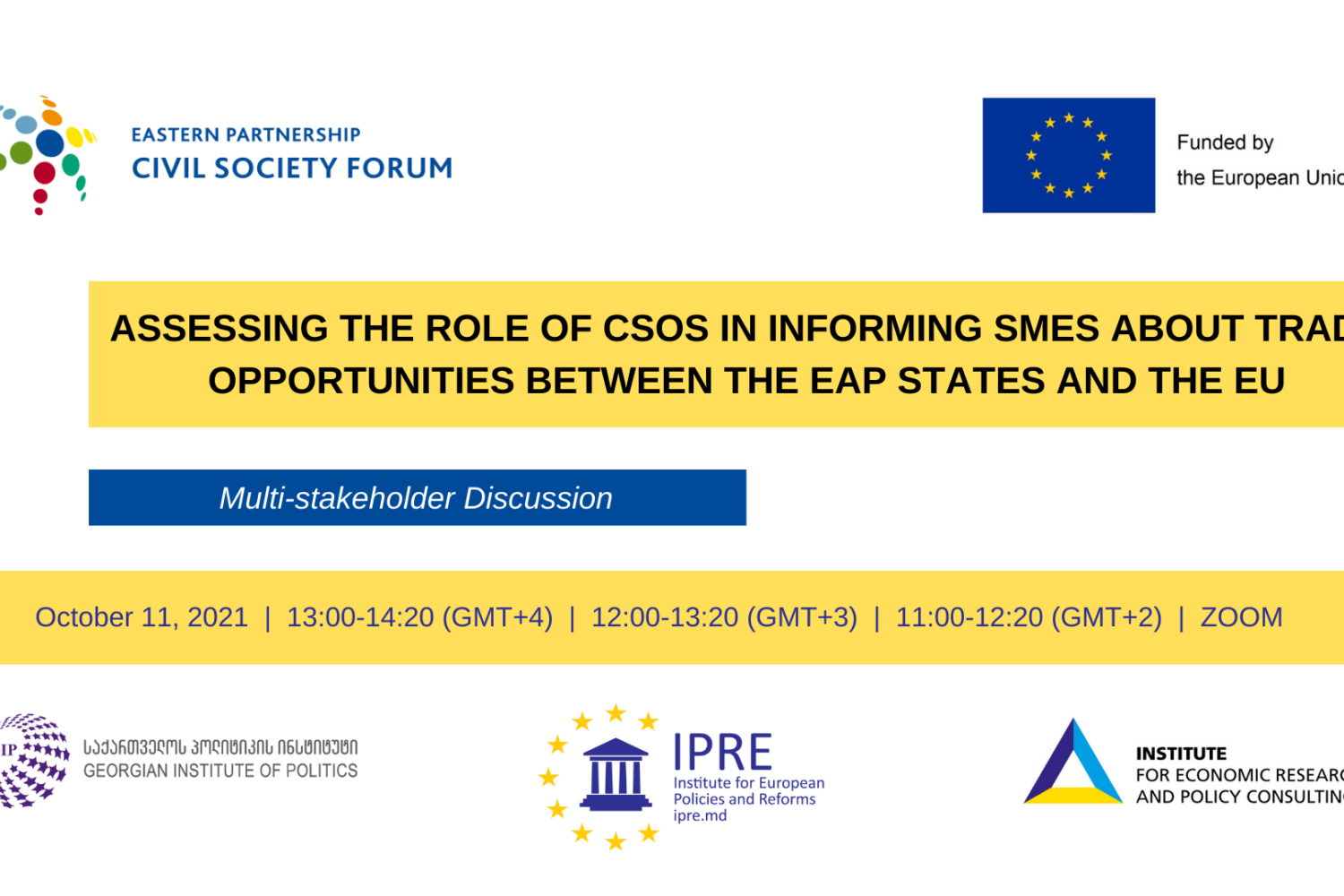 On October 11, 2021, at 13:00h (Tbilisi time, GMT+4) the Georgian Institute of Politics (GIP) together with the Institute for European Policies and Reforms (IPRE) and Institute for Economic Research and Policy Consulting (IER) organized a multi-stakeholder discussion about how do CSOs see their role in informing SMEs regarding trade relations between EaP states and the EU.

The aim of the discussion was to enhance the regional cooperation of the CSOs, SMEs and other stakeholders by learning from each other’s experience on the CSO’s role in raising SMEs’ awareness about export opportunities in the EU. The CSOs representatives from all EaP were invited to exchange their domestic practices, challenges and perspectives.

The online event took place under the framework of the project “The Role of the CSOs in DCFTA Implementation in Georgia, Moldova, and Ukraine”, which is financially supported by the European Union under the EaP CSF re-granting scheme for the LOT 3.

The recording of the online event is available here.

The online event allowed getting feedback from the wider regional audience, namely with the CSOs working not only in three DCFTA states but also in the other EaP countries.

The event was moderated by Dr. Kornely Kakachia, Director of the Georgian Institute of Politics (GIP). Opening remarks were delivered by Mr. Nicholas CENDROWICZ, Deputy Head of Unit for “Georgia, Moldova, Economic and Investment Plan” European Commission (DG, NEAR) who emphasized the priority of EU4Business programs in EaP countries. Within the second panel of the meeting, experts from each EaP state (Georgia, Moldova, Ukraine, Armenia, Azerbaijan, Belarus) delivered speeches on current results, challenges and perspectives in their states with regards to the trade relations with the EU. They discussed how they assess the role of CSOs in informing the SMEs about trade opportunities (mainly export) with the EU. The event participants raised the questions related to the concrete areas of the economy where the CSOs are promoting the export in the EU from the EaP states, the impact of the Karabakh war on the trade relations as well as on the key differences between the CSOs operating in EaP states.

According to the responses of the speakers, it became clear that In the Georgian case, CSOs lack possibilities and ability to communicate DCFTA related issues with businesses in a way to give them some useful tools, their role is tiny and in comparison with the Western countries, in Georgia there is a problem of creation of business organizations and associations to have joint efforts. While, in Moldova, due to the fundamental problems in the country related to the political crisis, challenges with regards to rule of law, corruption, etc., investors are scared to invest. There is not much of a link between DCFTA and investments. Despite this fact, there are certain cases where investors and large businesses benefited, but SMEs still face challenges. With regards to Ukraine, the government works actively for DCFTA implementation and there are some investors from the EU states who happily cooperate with Ukraine. As for the operation of the CSOs, they are more active on the central level but on the local level CSOs are less active in terms of informing and cooperating with local SMEs about trade opportunities.

As for the other three EaP states, in Armenia, there are not some evaluations and assessments about how the war influenced the export with the EU. However, there were some companies and factories which had some mobilization during the was and in this regard, there were some impacts regarding export not only with the EU but also with other states. The main problem where Azerbaijan faces challenges in terms of export to the EU is the problem of diversification of the economy. Namely, the country’s economy is mainly based on natural resources like oil and gas. However, Azerbaijan is one of the key energy providers in the EU. As for the SMEs, the main problem they face in terms of export-import is getting licenses. In Belarus, according to the expert’s view, the EU is the country’s main partner and she believes that foreign trade for Belarus will not be influenced by political issues. She believes that the country will move forward in terms of foreign trade, goods, services, IT technologies and transportations.

The project expert, Dr. Michael Emerson, Associate Senior Research Fellow at CEPS, made concluding remarks regarding the technical export standards with the EU and explained the difference between exporting agricultural products and industrial products.