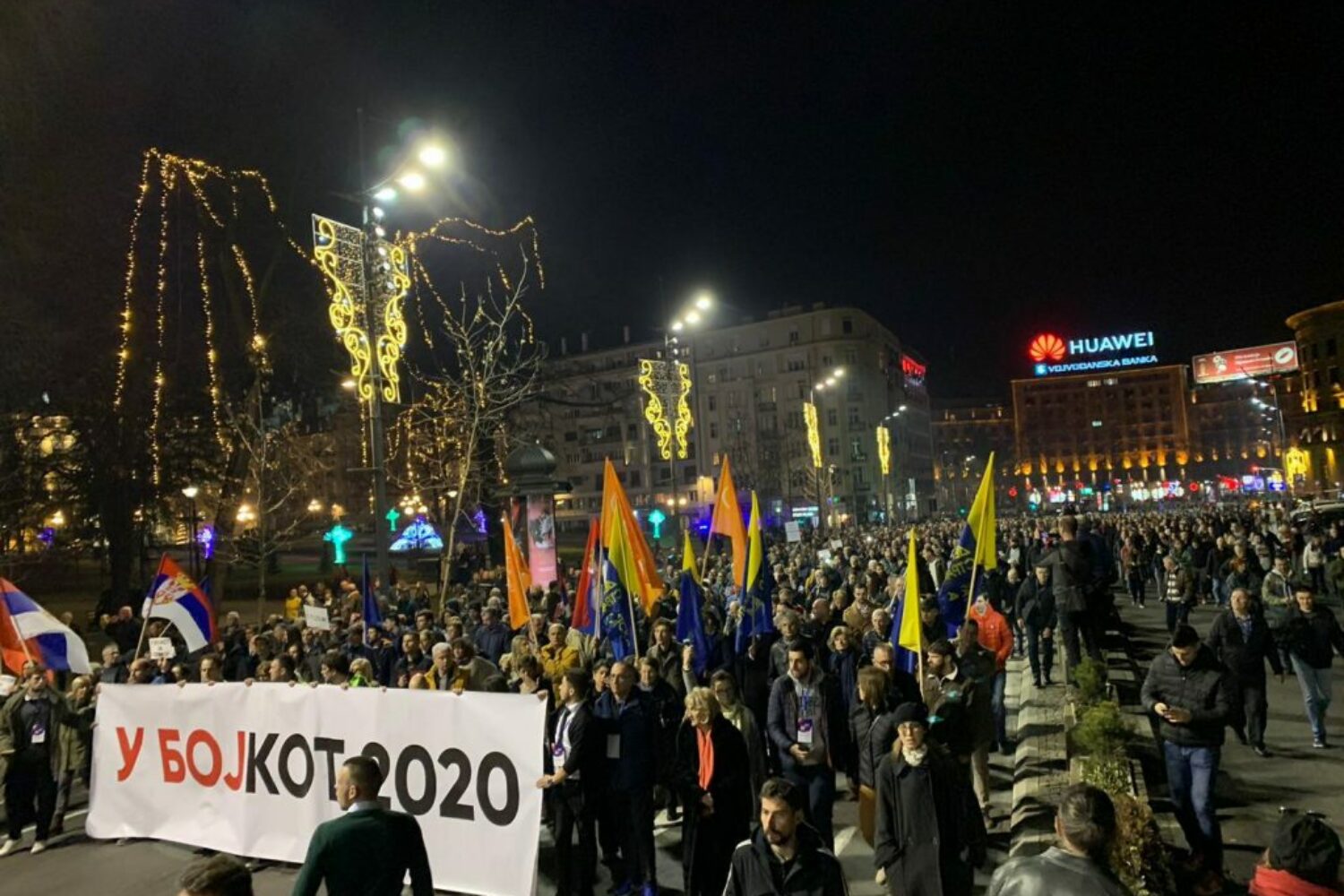 Serbia is among the countries, that held elections during the COVID-19 pandemic in Spring 2020 and as in case of Georgia, most of the Serbian opposition parties called the elections illegitimate. According to the official report of Republic Election Commission of Serbia, the coalition under the ruling Serbian Progressive Party (SNS) won the elections by 60.65% (188 seats out of 250). The five-month-long opposition protest that started on the day of the elections, ended with the President Alexander Vucic announcing snap elections in 2022 to be held along with the Presidential elections. To what extent can Georgia use the example of Serbia to defuse the crisis and normalize the situation?

What happened in Serbia?

On June 21, 2020, Serbia held parliamentary elections. The largest  unityof opposition parties (Democratic Party, People’s Party, Party of Freedom and Justice, Dveri)  – Alliance of Serbia (SzS) refused to take part in the elections in protest. Opposition parties within the alliance left the negotiations mediated by the European parliamentarians, noting that no changes were expected from the ruling party. Government’s use of traditional media for its own advantage, abuse of government resources for campaign, malfunctioning electoral system and unequal and unfair pre-election campaign in the face of COVID-19 pandemic were named to be major reasons behind the boycott. Additionally, opposition blamed President Vucic, who is also the leader of the ruling Serbian Progressive Party (SNS), for abusing his authorities for the campaign purposes. It needs to be noted that the voter turnout has been the lowest – 48.9% since 2000 elections. Several opposition parties refused to boycott the elections, out of which only two managed to cross the threshold which was spontaneously decreased from 5% to 3%. These parties are Socialist Party of Serbia (SPS) gaining 10.38% and Serbian Patriotic Alliance (SPAS) gaining 3.83%. In addition to these two parties, four ethnic minority parties gained 19 seats in the Parliament. According to the electoral law of Serbia, 3% threshold is waived for the ethnic minority parties. For instance, one of the parties representing Bosnian ethnic minorities, managed to get three seats in the parliament by receiving only 0.7% of the votes. In fact, this exception enabled the President Vucic to garner all 250 seats of the Parliament.

Prior to 2022 snap elections, President Vucic formed a new government with those parties that achieved the threshold. By doing so, he emphasized the establishment of the “Unity Cabinet” and with this, may have tried to share the responsibility with other parties. Local policy analysts in Belgrade think that the President’s move is aimed at strengthening the legitimacy shaken in June by the boycott of the opposition.

In case of Serbia, boycott before the elections and in case of Georgia, refusal to enter the Parliament after the elections, practically led to a one-party parliamentary governance, which, while being a legal possibility, is an unacceptable condition in political terms threatening democratic pluralism. Additionally, one-party rule creates a nuisance for the ruling party as well, as it puts the whole responsibility onto them and hence, increases their accountability to the public. That is why the President Vucic decided to form the government with two other opposition parties and hence share the responsibility with them. Meanwhile, in Georgia, the ruling Georgian Dream Democratic Georgia party tries various means to convince other opposition parties to enter the Parliament.

What are the similarities between local and international observer assessments in Serbia and Georgia?

Critical conclusions drawn by the local organizations and rather moderate, but critical assessment made by OSCE-ODHIR became one of the arguments and one of the main leverages to shape the opinion of international society [in Serbia].

As for the international organizations, according to the OSCE-ODHIR assessment, despite pandemic, parliamentary elections were administered effectively in Serbia. However, as it was noted, dominance of the ruling party, especially in media was concerning. OSCE-ODHIR assessment of the elections in Georgia are less critical than that of Serbia. Therefore, unlike Serbia, opposition parties in Georgia will have to put more effort in proving rigged elections and the unequal circumstances under which the pre-election campaign was held during the pandemic   especially in the context when none of the parties refused to participate in the elections in Georgia. Unlike in Serbian case, participation in the election campaign on the one hand, and on the other hand emphasizing the unjust pre-election environment and pointing at the unequal circumstances for the opposition parties after the announcement of the official election results, rather weakens the arguments of the Georgian opposition parties.

What led to the snap parliamentary elections in Serbia and can this be a relevant case for Georgia?

Besides the continuous opposition protest in Serbia, official statement of the European Parliament preceding the Serbian President’s decision is worthy of attention. Serbia, as the EU candidate country, attracted the attention of the European parliamentarians. Their official statement expresses the readiness to act as the mediator during the new rounds of negotiations. The statement by the European Parliament emphasizes the importance of the democratic reforms and the rule of law – the most important pre-conditions for the European integration. Their main focus was on democratic and well-functioning electoral system and parliament. Some of the European Parliament member parties, more specifically the representatives of the Progressive Alliance of Socialist and Democratic Alliance, went further as to describe the new structure of the parliament as a “mockery of democracy”. They called on the EU states not to start the talks on the EU integration with Serbia, until Serbia does not reach the required level of democracy. It was followed by the individual statements, including from the expert on Balkan matters – professor Florian Bieber, who noted that EU could not pretend that “farce of an election didn’t happen in Serbia”. Therefore, one of the reasons why President Vucic decided to hold snap elections was, most likely, to avoid the threat to the process of the European integration. Moreover, strict assessment of the elections by the EU representatives and experts could have been the defining factor behind this decision.

Unlike Serbia, neither the EU, nor the academic circles made clear statements on the elections in Georgia that would either back the protest of the opposition or increase the government’s legitimacy. This may be the result of the ineffective communication by ruling or opposition parties to bring forward Georgia’s political crises at the international level. The fact that Georgia plans to officially apply for the EU membership in 2024, makes the case of Serbia even more relevant for Georgia, which may be threatened by the political crisis. Therefore, it should be in the interest of both the government and the opposition to achieve the consensus in the shortest period of time. Based on the Serbian example, this may be achieved by the involvement of international partners in the mediation process as well as by the active participation of the researchers of the region and the experts in public discussions. It needs to be mentioned that in addition to snap elections, opposition parties have other demands as well. More specifically, their demands include electoral system reform, resignation of the chairwoman of the Central Election Commission and the release of those individuals, that some opposition parties consider to be political prisoners, which may further delay the process. Achieving consensus on snap elections is further complicated by the OSCE-ODHIR report that does not include the information on significant irregularities during the elections, which strengthens the government’s position. However, the fact that almost every opposition party, with completely different values that together got 52% of the votes called the elections illegitimate after the elections, questions the results of the elections, casts doubt on the fair election environment and is clearly starting to attract the attention of the international society. To overcome the deadlock, Serbia’s case may become relevant. More specifically, events taking place in Serbia may become a useful precedent for calling snap elections in case there is a consensus between political parties and the government. If so, the best time to hold the elections would be the Fall of 2021, when it is planned to hold local self-government elections as well. In this case, the country can avoid spending double financial or administrative resources, especially when the country is already facing severe economic challenges.