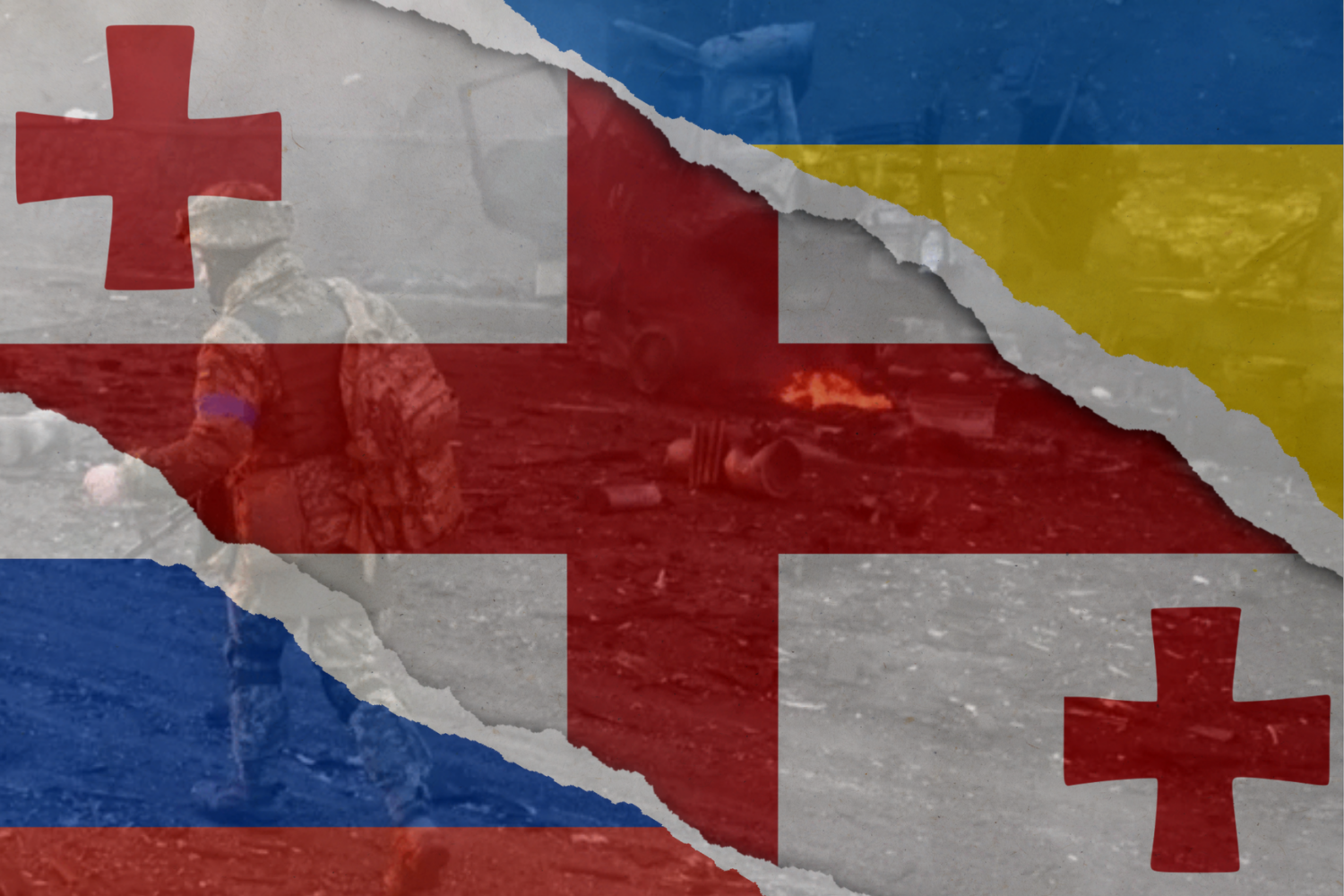 On February 24, Russia launched a full-scale military assault on Ukraine, that, in the words of the NATO secretary-general, has shattered peace on the European continent. Leading analysts across the world, including the US intelligence, predicted that Kyiv would fall in matter of days following the Russian invasion. Contrary to expectations, Ukrainian soldiers, along with territorial defense forces, resisted the offence and have managed to hold the capital. Even in towns which Russian troops have penetrated, the intruders were met with stark resistance from the local population and unarmed civilians.

The failure of the Russian army to achieve a quick victory in Ukraine suggests that the military campaign is going to be bloody and will not end easily. President Macron, after his conversation with President Putin in the second week of the invasion, concluded that the worst was yet to come. With Russia launching a full-scale assault on Ukraine, the West seems to be more united than ever before: dozens of countries imposed strict sanctions on the Kremlin and NATO deployed its Response Force for the first time in its existence.

As Russia is on a fast track of becoming a pariah state, countries located in the Eastern neighborhood of the EU are facing strategic dilemmas.

Although the Russo-Ukrainian war is still ongoing and the situation remains fluid, four different scenarios discussed in detail below offer some insights on the implications of this conflict for Georgia. What are the dilemmas that officials in Tbilisi would face in different scenarios?

As the time of writing, the Ukrainian army has managed to withstand Russian military aggression and maintain control of all the major cities. Intruders’ military convoys are mostly stalled on the roads and face serious logistical challenges. Meanwhile, as NATO and other allies continue to supply Ukraine with modern assault weapons and defense technology, the latter’s capabilities to counter Russian aggression will grow substantially. In the context of a protracted and bloody campaign in a neighboring country and domestic pressure stemming from an unprecedented economic burden, President Putin might be facing failure. Russia’s retreat from Ukraine will make it easier for the Associated Trio countries to pursue EU membership and close anchoring to Euro-Atlantic structures. In the best-case scenario, the Western European countries may even reconsider their cautious approach to NATO membership for Georgia and Ukraine.

However, the scenario may also have major risks for Georgia. The Russian political elite will face serious domestic challenges and, in the 2024 elections, president Putin may require another brief victorious war to rally the voters behind his authoritarian rule. This places Tbilisi under high risk. Due to the fact that Georgia has figured into the Russian ultimatum on NATO enlargement, it has a relatively weaker military, and the occupier’s troops are already in Tskhinvali and Abkhazia, Georgia could be an easy next target.

In this scenario, Georgia’s domestic instabilities make it even more vulnerable to Russian aggression. After the ambivalent positioning of the ruling party in their support of Ukraine in the ongoing conflict and damaged relations with the Western partners, a change of the government might be inevitable.

At the same time, the development of this scenario largely depends on whether the current Russian leadership manages to maintain power in the Kremlin after a military defeat in Ukraine and heavy economic tolls caused by sanctions. If Putin loses power as a result of his failed military campaign in Ukraine, then the internal chaos and international isolation of Russia would probably give Georgia, Ukraine, and Moldova the chance to further advance their Euro-Atlantic integration.

Although NATO and its allies are supplying Ukraine with arms, so far, no fly zone over Ukraine has been secured. With the increasing intensity of shelling in cities and the mounting death toll of civilians, the Kremlin might be on the road to achieving its goal. If Ukraine concedes and Russia succeeds in its geopolitical goal, that will also mean the end of the EaP and Georgia’s Euro-Atlantic aspiration for decades to come.

There is no doubt that after achieving its goal in Ukraine, the Kremlin would pose an ultimatum to Tbilisi. Officials in Tbilisi will face the same dilemma: fight or give in and become a Russian satellite country. In the short-term, Georgia could be dragged into the Commonwealth of Independent States (CIS) while in the long-term it might be coerced into membership of the Eurasian Economic Union (EEU) and the Collective Security Treaty Organization (CSTO).  A watershed moment for Georgia’s reaction to Russian demands could be whether the Kremlin’s list of demands will also include an ultimatum for Georgia to formally recognize the Russian-occupied territories. In this case, an armed resistance from Georgia is likely.

In this scenario, Georgia would also face major social unrest and instabilities. The majority of Georgians, especially the youth, pro-democracy civil society, and media, would likely be unwilling to live under a Russian-style authoritarian system. Therefore, backlashes, repressions and authoritarian rule is to be expected, to suppress the opposition. The country will be hit by massive emigration and brain drain.

This scenario represents a middle ground between the two possibilities discussed above. The parties could agree on going to a pre-war status quo, with the Eastern regions of Ukraine remaining de-facto independent and outside of Kyiv’s jurisdiction. The active conflict will go into the frozen stage and the rest of Ukraine will continue to prioritise close relations with the European Union. Occasionally there might be diplomatic pressure from the Kremlin for Kyiv to “recognize new realities” i.e. independence of Donetsk and Lugansk as well as annexation of Crimea. These territories will provide Moscow with persistent leverage to influence Ukrainian politics and sabotage the country’s pro-Western foreign policy.

This scenario is particularly relevant for Georgia, as Abkhazia and the Tskhinvali region are currently in a similar limbo. Emboldened by its success in Ukraine, Russia might try to exploit Georgia’s vulnerability by increasing military threat. In the worst-case scenario, Abkhazia and South Ossetia would remain de-facto independent, but due to mounting Russian military pressure Georgia, the latter would be forced to declare neutrality and give up its policy of Euro Atlantic integration.

Last but not least, if Russia increases the intensity of its bombings and the death toll among civilians reaches high numbers, the West might be compelled to introduce a no fly zone over Ukraine or intervene militarily by other means. Consequently, that would increase the potential of escalation into a full-scale military conflict between NATO member states and Russia. President Putin has already made it clear that a no fly zone would be interpreted as participation in the war. But even without a NATO-imposed no-fly zone the risks of direct confrontation between Russia and the NATO are increasing daily. The Russian government has already hinted many times that it may interpret the delivery of certain types of weapons (such as drones, anti-missile systems or fighter jets) as a direct conflict against Russia, and has threatened to bomb the Western convoys delivering weapons to Ukraine.

Georgia, despite not being a NATO member, would not be able to stay out of the conflict. Russia would likely demand that Tbilisi open up a corridor to Armenia. As a member of the CSTO, Yerevan would have no choice but to side with the Kremlin in the case of a full scale Russia-NATO war. As Armenia hosts one of the largest Russian military bases abroad, Moscow would seek to exploit Georgia’s strategic location.

On the other hand, the South Caucasus also falls within the strategic interests of Turkey, a NATO member and important ally for Georgia. As Turkey has an interest in ensuring the security of the Black Sea area, it would increase its regional role. Ankara’s shooting down of a Russian military plane in 2015 has already illustrated the country’s readiness to defend its national interest when needed. It should also be noted that Azerbaijan is a close ally of Turkey not only politically, but also militarily. For these reasons, the South Caucasus is vulnerable to becoming an epicenter of any NATO-Russian conflict.

As the war in Ukraine develops, its implications for the global security architecture has not yet been determined. Whether the Russian leadership manages to achieve its goal of neutralizing Ukraine remains to be seen. One thing is clear: a new “Iron Curtin” is descending over Europe. Where the line will be drawn, however, depends very much on the results of the ongoing war.

In any case, the implications and stakes for Georgia are high. If Ukraine falls, Tbilisi could be the next target. On the other hand, economic sanctions, combined with Ukraine’s impressive resistance, may succeed in defeating the Russians. Such a scenario would breathe new life into Euro-Atlantic ambitions of Moldova, Ukraine, and Georgia. Therefore, the Georgian political elite and policy makers need to actively engage their Western partners, to guarantee Georgia does not fall behind the Iron Curtain. With the recent setbacks in the Georgia-EU relationship, the dangers of the isolation are as real today as never before.

There are also possibilities for other scenarios. Russia may seek to once again freeze the conflict and use it as leverage later on, or there may be a full-scale war between NATO and Russia. In both cases, decision makers in Tbilisi will be facing major strategic dilemmas and their decisions will have implications for Georgian democracy for decades to come. Georgian society needs to start planning and working on increasing its civil defense capabilities. The best practices from the Baltic states as well as the example of Ukraine, need to be studied and implemented in the Georgian context. Regarding civil defense capabilities, it is vital to counter Russian hybrid warfare and threats to social cohesion.

Official Tbilisi also needs to intensify its cooperation with Turkey as it is a NATO member and a large regional military power that has a potential to counterbalance Russian regional dominance. Additionally, Turkey could play a similar role for Georgia as Poland does for Ukraine, by acting as a humanitarian and military aid transit corridor.

Finally, while Georgia’s NATO membership is on hold, Tbilisi should further enhance its special relationship with the alliance to strengthen the civil preparedness and military readiness against external threats. For this, Georgia should learn from past examples of kinetic and non-kinetic warfare. While the Georgian army will be highly outnumbered in any scenario of a Russian invasion, Tbilisi should aim to establish potent deterrence for such scenarios which may affect the cost-benefit-calculus of Russia and prevent the invasion.

Finally, Tbilisi also needs an improved risk-mapping to mitigate any political, security or economic risks that may make the Russian invasion more likely. These risks include economic dependency on Russia (both for export and import), Russian investments in strategic sectors (infrastructure, energy and telecommunication), the influx of Russian economic migrants as well as Russia-supported anti-Western propaganda and the proliferation of radicalized pro-Russian actors.