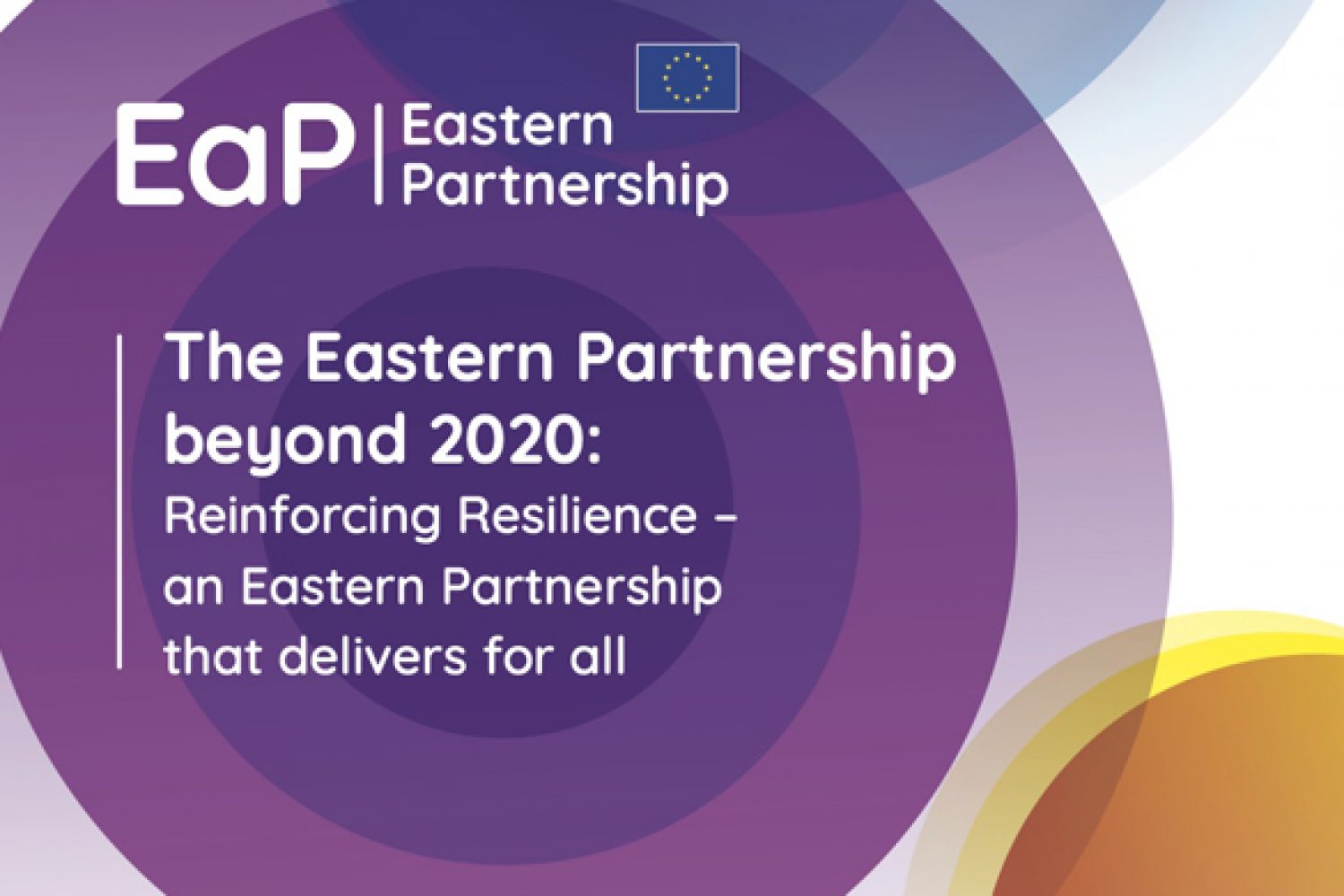 On 18 March, the European Commission released a new Communication on the Eastern Partnership (EaP) Beyond 2020. This was followed by an Association Implementation Report on Georgia published by the European Parliament in April, and the Council Conclusions on the new EaP policy framework in May. The outbreak of Covid-19 has overshadowed these important events to such an extent that these developments attracted little commentary in Georgia.

While there were hardly any debates on the EU’s new policy in Georgia, the Communication  triggered some reactions in Brussels. EU institutions claim that the new policy represents an ambitious update, while critics have described it as “disappointing”. The main criticism points out, that compared to the initial EaP policy, the new framework is not sufficiently ambitious and lacks strategic policy objectives beyond 2020. While the original EaP framework had put forward several ambitious and comprehensive agreements and visa liberalisation regimes, the new Communication does not provide such significant and tangible objectives. Another disappointment refers to the fact that the new policy does not address the request of the EU’s Associated States (AA countries or trio) for a new dialogue in a so-called “quadrilateral format” (EU+3). This discourages the joint efforts of Georgia, Moldova and Ukraine to develop a more ambitious agenda for integration with the EU. Instead, the new policy proposes deepening bilateral cooperation with the EaP states in new priority areas (discussed below).

For critics, the policy casts doubts on whether the new EaP can create room for both the AA states, including Georgia, and the rest of the EaP, which are tied up with other commitments with the Eurasian Economic Union and Russia. If the new EaP is designed to accommodate such a wide range of appetite for EU integration, then what can it really offer the Associated countries, including Georgia, who are the most advanced and enthusiastic about the EU? After all, Georgia has already undertaken a wide range of commitments under the Association Agreement and has been calling for membership in the European Economic Area (EEA).

While the new policy may be promising neither EEA nor EU membership, as many Georgians may be hoping for, it would be wrong to write off the policy in its entirety. When look at all aspects of the new policy, there are still a number of opportunities for Georgia that deserve more attention. In the end, it will be up to Georgian policymakers to make the most of the new policy in order to advance Georgia’s path towards European integration, and secure EU support for much-needed domestic reforms to accelerate the country’s development and modernisation.

What do the new priorities imply for Georgia?

The new agenda on economic cooperation is mostly limited to the full implementation of the Deep and Comprehensive Free Trade Area. There are new elements on investing in youth and research, cooperatives and woman-led initiatives. The EU also promises its support in integrating the EaP states into the Single Euro Payment Area (SEPA). These additions could be very helpful for Georgia to recover from the economic downturn due to the COVID-19 pandemic, especially as the country suffers from a high unemployment rate, among youth in particular (11.6% overall, 29.6% for the age group 20-24 and 20.8% for the age group 25-29). However, given Georgia’s ambitions to join the European Economic Area, these are rather modest updates without substantial changes in Georgia’s existing economic cooperation with the EU.

The updated agenda on the rule of law, tackling corruption and security renews existing commitments and established cooperation in the framework of the EU Civil Protection Mechanism (CPM), the Common Security and Defence Policy (CSDP) and the Women Peace and Security (WPS) agenda. However, without saying much about military cooperation and  the unresolved separatist conflicts, the new EaP does not add anything substantial to the existing agenda. Instead this hints that the EU prefers staying silent on military cooperation in its Eastern neighbourhood.

The remaining areas bring forward the policy objectives of the new European Commission and provide a good basis for real upgrades to EU-Georgia cooperation.

The Communication refers to the European Green Deal in order to address environmental and climate challenges. The EU knows it needs to bring many allies on board, including its Eastern neighbours. For Georgia, joining the European Green Deal would imply major reforms in the sectors of energy, environment and climate, and all related areas including economic activities, trade, agriculture, governance of biodiversity and green transport solutions. As this translates into a lengthy and costly process of modernisation, the EU’s support could speed up needed reforms in these areas.

The Commission’s Communication also covers public health, which is especially important considering the outbreak of the pandemic. The EU promises to support its Eastern Neighbours in the modernisation of medical facilities, e-health, trainings and affordable and accessible medical care. In fact, this is nothing new for Georgia, as the EU-Georgia Association Agreement already incorporated such cooperation in the domain of public health. But given the mutual interests in public health and fighting against communicable diseases, this could be a good basis for Georgia to put forward a more ambitious agenda with the EU, in a bilateral or a quadrilateral format.

Another opportunity for Georgia is updated cooperation in the digital domain. At first glance the new policy does not offer substantial upgrades for the country as it builds on the provisions of the AAs, which Georgia has already implemented and gone beyond. By surpassing its Association commitments, Georgia demonstrates its absorbing capacity for the EU’s support in the digital sector. This puts the country in a better position to benefit more from EU funds and opportunities within the new EaP. For instance through the newly launched EU programme EU4Digital, which offers more funds and opportunities for more advanced countries, like Georgia. Cooperation in this area also proposes setting up a free roaming space in the EaP. Some may be disappointed that a more ambitious approach was not taken here, by extending the free roaming agreement to the EU itself. This could be particularly useful for Georgia, Moldova and Ukraine as a roaming agreement with the EU would complement their existing visa free regimes. Yet, for the time being the new policy is silent on such an opportunity.

Another important update is in the domain of cybersecurity. As the EU-Georgia Association Agreement does not include cooperation on cyber matters, Georgia could largely benefit from this addition, especially as the country has already made some steps to approximate the basic pillars of the EU’s legislation on cyber. After experiencing several serious cyberattacks, beginning with the August War in 2008 and more recently during the pandemic, it is clearly in Georgia’s interests to align itself with the EU’s cyber policy and to benefit from the EU’s support in its capacity building.

Finally, the Communication briefly compiles a number of important issues for fair and inclusive societies, human rights and democratic principles. Although the Communication does not provide much detail on any of these issues, for Georgia it goes without saying that these matters represent EU values and are therefore prerequisites for Georgia’s enhanced integration with the EU. New additions in this area include privacy and data protection. Seemingly minor issues for Georgia, these are hot issues on the agenda of the European Commission as these rules reflect fundamental European values and can project the EU’s global regulatory and soft power. Therefore, adherence to the same rules goes beyond reaping the benefits of digitalisation and creates extra room for Georgia to deepen its ties with the EU.

As before, the new EaP framework advocates the ‘more for more principle‘, implying that the EU will dedicate more support to the neighbours which deliver more reforms. There is little clarity in the Communication on what precisely the EU expects from its neighbours, yet the Commission proposes to put forward better tools for measuring the progress and the impact of judicial reforms, especially when deciding on its assistance. This is important for Georgia, as the country is the recipient of the new Macro-financial Assistance from the EU worth €150 million, all provided in loans targeted to help the Georgian economy recover from the current recession. This, as well as future EU assistance, will be granted with such conditions which Georgia will need to fulfill.

“Is the glass half empty or half full?”

Overall, for Georgia the new EaP policy mostly translates into the full implementation of the Association Agreement and Deep and Comprehensive Free Trade Area. The absence of tangible additions to security cooperation, and the silence on the quadrilateral (EU+3) format, are disappointing.

However, the new agenda still offers a number of opportunities which deserve proper attention from Georgian policymakers. This mainly refers to the digital, ecological and cyber domains, which go beyond the provisions of the Association Agreement. In fact, the reforms already undertaken in line with the Agreement could provide a solid basis for developing tangible upgrades in these areas. By demonstrating its absorbing capacity of EU funds, and readiness to take on ambitious commitments, Georgia could secure the EU’s assistance for vital reforms in energy, environment, climate and digital areas. Implementing these reforms would result in progress and modernisation of the country in the aftermath of the COVID-19. To this end, it is in Georgia’s interest to promote debates on the future of the EaP, actively participate in dialogue with the EU, and to not let the pandemic overshadow these important developments.

The EaP Summit on 18 June will provide a clearer outline on the EU’s engagement in its Eastern Neighbourhood. Yet, whatever the outcomes of the June Summit, it is clear that if Georgia wishes to develop an ambitious relationship with the EU, in a quadrilateral or bilateral format, it first needs to do its homework by implementing democratic reforms, protecting human rights, rooting out corruption and strengthening the rule of law. To do so, respecting the March 8 Agreement on the new electoral system and the proper conduct of the parliamentary elections are absolute priorities.

Tinatin Akhvlediani is a Researcher at CEPS’ Foreign Policy unit. Her expertise and publications are focused on ICT and trade. Her geographic area of expertise is Central and Eastern European Countries and Eastern Partnership with a specific focus on the EU’s Association Agreements with Georgia, Moldova and Ukraine. Apart from research, Tinatin is also co-teaching a master’s degree course on International Trade Policy at the University of Warsaw.Tinatin holds a PhD degree in Economics from the University of Warsaw, Master’s degrees in International Economics from the University of Warsaw and European Economic Studies from the College of Europe and a Bachelor’s degree in Economics from Tbilisi State University.Before joining CEPS, she worked as a research assistant at the Digital Economy Lab, jointly established by the University of Warsaw and Google, and as an academic assistant at the College of Europe. Since 2017, Tinatin is leading a research project granted by the National Science Centre of Poland on ICT and trade in Central and Eastern Europe. On this topic, she conducted research visits at Indiana University in the United States, Vienna Institute of International Economic Studies in Austria and Shanghai University in China. Her research outcomes have been presented at the international conferences in Europe as well as in Canada, the United States, China and Australia. View all posts by Tinatin Akhvlediani