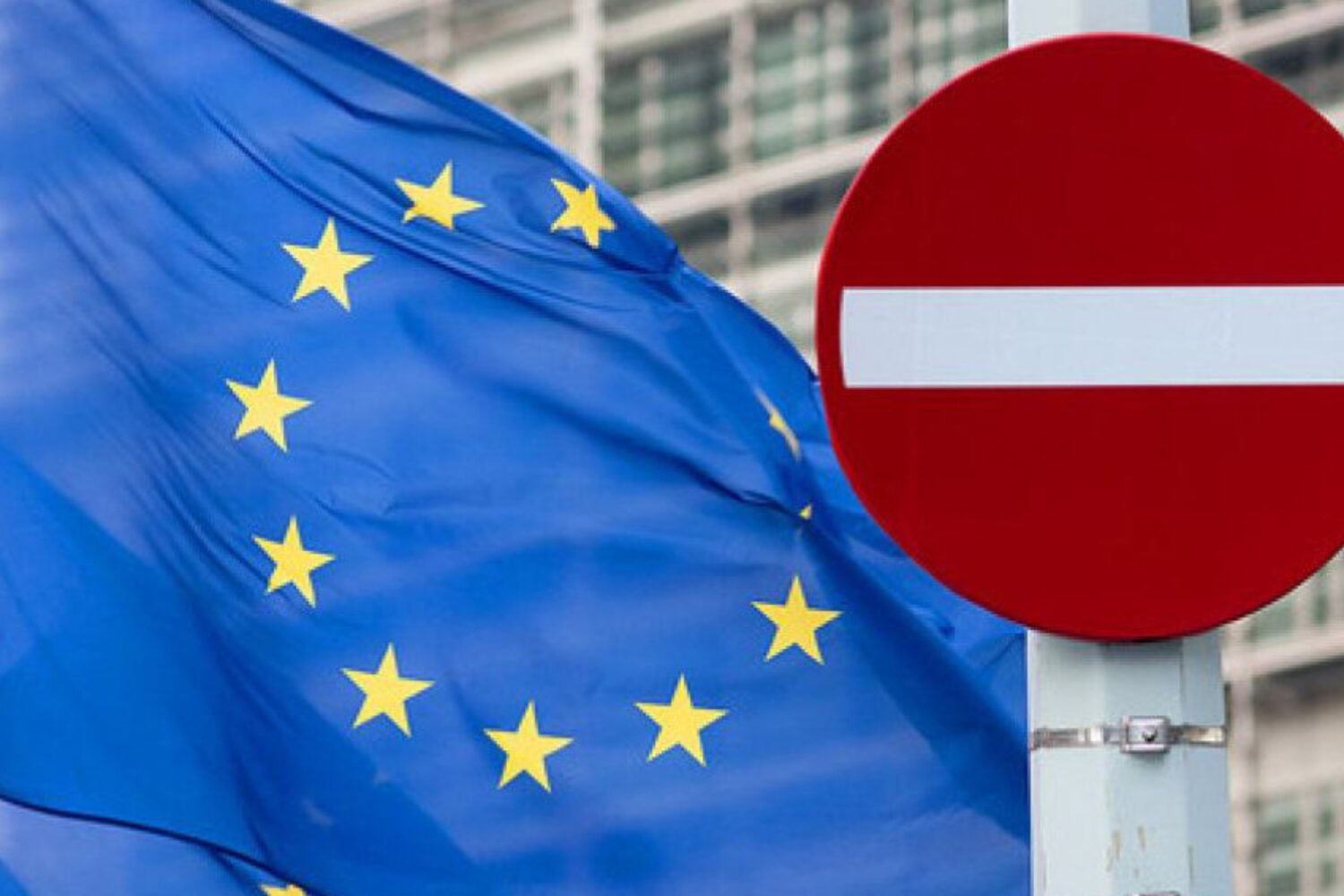 Nearly one year ago, on March 28, 2017, Georgian citizens received the right to travel to the EU’s Schengen Area without a visa. Prior to granting visa-free travel, the EU put a suspension mechanism in place that would allow for visas to be reinstated under certain circumstances.

The European Commission’s first report under the visa suspension mechanism found that, in general, Georgia has been meeting the visa liberalisation benchmarks. The December 2017 report also noted, however, that “further improvement of the implementation is expected,” in particular in relation to the number of unfounded asylum applications submitted by Georgian nationals and the disproportionally high involvement of Georgian nationals in organized crime groups (OCGs) in the EU.

That criticism led to a debate in Georgia between the government and the opposition on the gravity of the situation outlined by the report and the possible risk of the EU revoking the visa waiver. Tamar Khulordava, a Georgian Dream MP who heads the parliamentary committee on European integration, responded to the report saying that “Georgia’s achievements and the Georgian government’s action have been assessed positively and there is no reason to fear that any of the provisions of the suspension mechanism will be invoked.”

The opposition, however, urged the government to implement the necessary reforms and tackle the underlying causes of migration. According to Gigi Tsereteli, a MP for the opposition party European Georgia, “the poor economic situation and poverty in the country” are two of the main reasons for the increased number of Georgian asylum seekers. Opinion polls conducted by CRRC and NDI consistently rank unemployment and poverty in the top five national problems in Georgia.

Will migration trends lead to suspension of Georgia’s visa-free regime? 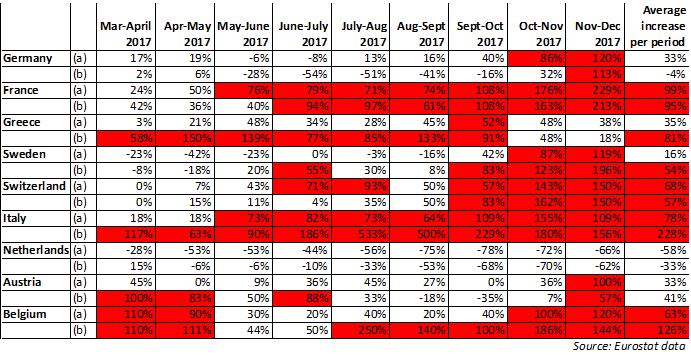 Out of the eight EU member states with the largest number of asylum applications from Georgian nationals in 2017—only did not register two-month periodic increases of over 50%, compared to the same period in 2016 at least once from March-Dec 2017 (See. Line a), which would allow member countries to trigger the mechanism. The number of 50+ percent increases in 2017 appears to be rising every quarter, while Italy, Belgium, Greece, France, and Sweden have had an average 2-month increase (See. Line b) of over 50 percent. Meanwhile, recognition rates of Georgian asylum applications in all EU member states remain low.

These figures suggest a problematic trend. German Interior Minister Thomas de Maizière expressed serious concerns about the increase in Georgian asylum seekers after a meeting Georgian Foreign Minister Mikheil Janelidze on the sidelines of the Munich Security Conference in February.

Despite such concerns, it is unlikely that the EU will revoke visa-free travel for Georgians in the short-term for a number of reasons. For one, the European Commission has stated that “decisions to suspend visa-free travel will certainly not be taken lightly and any steps leading towards the triggering of the suspension mechanism would be subject to careful assessment and analysis.” The Commission will take into account the overall impact on the migratory situation in the EU and the consequences of a suspension of the visa waiver on the external relations of the EU and its member states with Georgia, among other factors, while “working in close co-operation with that third-country to find alternative long-term solutions.”

Over the past several weeks, Georgian President Margvelashvili and government officials have held meetings in Brussels with EU officials and have hosted a German delegation to talk about the issue. As a result, Georgia has vowed more active government efforts to reduce the growing number of Georgian applications for EU asylum and has introduced new legislation that tightens procedures to change last names.

In addition, the Georgian government should consider monitoring the mood in European capitals like Berlin, as well as Athens and Rome. Both Italy and Greece have high numbers of Georgian migrants and are amongst the most popular destinations for visa free travel, while Georgian OCGs in Greece and Italy are amongst the most active in Europe, according to experts.

In September 2017, Italy and Germany arrested 28 people suspected of being part of a Georgian criminal ring from Kutaisi that had been burgling apartments since 2015. Italy-based Georgian OCSs have traditionally been involved in organized property crime, but are expanded into other illicit markets as well. The situation in Greece has been largely similar. Since 2005, Georgians have increasingly been involved in the Greek underworld, setting up shop in Athens and Thessaloniki. In July 2016, the police arrested 25 Georgians accused of carrying out at least 141 cases of theft and robbery in 2016.

These arrests come at a time when governments in both Italy and Greece are under tremendous popular pressure to deal with the effects of the refugee crisis in the Mediterranean. Even before the refugee crisis, 74.9% of Greeks agreed that high levels of immigration increase crime levels. Meanwhile, 46% of Italians think that immigrants are a threat to public order, according to a 2017 opinion poll by the European Security Observatory and Demos.

The Greek government remains supportive of visa free travel for Georgians so far, although it has continued the previous government’s strict immigration policy on the number of Mediterranean Sea arrivals. All MEPs of the Syriza party, the senior partner in the coalition, voted in favor of the visa liberalization deal last year. In Italy, however, there is a hung parliament following the 2018 March parliamentary elections, which were dominated by the migration debate. While it is uncertain who will form Italy’s next government, the anti-establishment Five Star Movement and the far-right Northern League will likely play a role in any such attempt. Both parties have tough stances on migration and their European Parliament members (MEPs) voted against the visa liberalization agreement in February last year, comprising a third of the total no vote in the European Parliament. (Based on European Parliament voting data from VoteWatch EU)

What can Georgia do to avoid visa suspension?

In this context, it is important to closely monitor the situation in EU member states and make sure that all visa free travel regulations are strictly followed. In order to do this, the Georgian government should continue its campaign to adequately inform the public of the requirements of visa-free travel. Georgia’s figures are by no means unique. All Western Balkan countries also experienced an increase in asylum seekers and entry denials post-visa liberalization.

Secondly, the Georgian government should continue and further strengthen law enforcement and judicial co-operation with the EU and its member states. Lastly, the Georgian government must demonstrate that newly updated national strategies and action plans on organized crime are implemented and appropriately funded. The implementation of such reforms will ultimately determine the fate of visa-free travel.