The combination of an uninformed society and emotional attitudes toward European integration is a bad one, and one that can result in wild public mood swings. Based on my observations, perceptions of European integration—particularly among members of society who have not had the opportunity to live, travel, or study in the EU, or to receive much information about it, can be divided into three main strands:

a) hope, that the socio-economic situation for much of the population will change for the better; b) apathy: “no one in the EU will accept us, anyways”; and c) animosity toward Europe: “They are stealing our Georgianness.” 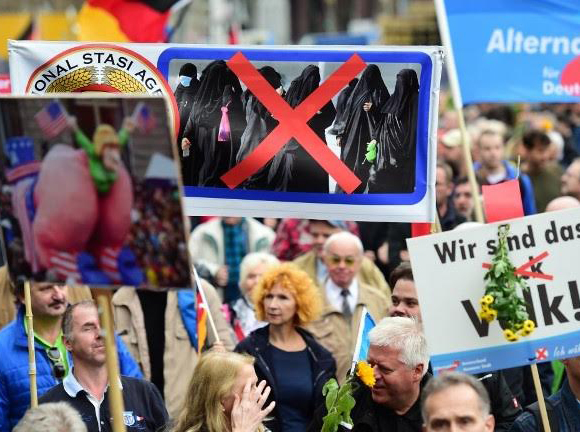 After finishing the voting procedures on the issue of visa liberalization in the European Parliament, social networks were filled with jokes such as pictures of bus abbreviations reading “Okriba-Prague-London” and “Martvili-Rome-Paris.” These attitudes reflect expectations prevalent in Georgian society about possible improvements to socio-economic conditions associated with integration with the EU.  On the other hand, it demonstrates superficial attitudes toward European integration, indicating a deficit of information provided by the government and a lack of comprehensive public discussions about the benefits of Georgia’s European integration.

These gaps are particularly problematic when obstacles to integration emerge: political elites and the media tend to provide insufficient explanation of the real causes behind those obstacles. Domestic politics within member states causes divergence on certain issues inside the EU and NATO. These internal politics drive the positions of a given country, Consequently, ongoing internal processes in the EU member states largely determine their foreign policies.

Internal political developments of the EU’s leading member states’ including the rise of right-wing nationalism and the ongoing migration crisis, have major implications for Georgia-EU relations. These dynamics are not widely understood in Georgian society, however. This results in an information vacuum that leads to false expectations, superficial attitudes, and skepticism regarding integration processes. Regarding Euro-Atlantic integration, two events in particular were painfully perceived by Georgian society. First, at the 2008 NATO Summit in Bucharest, Georgia was not granted a NATO Membership Action Plan (MAP). Second, in early spring, 2016, the visa liberalization process was delayed. In both cases, a dominant role was played by Germany with the support of other European states. Both cases resulted in negative attitudes toward Germany being formed in Georgia, despite the strong bilateral relations between the two countries.  Due to the information deficit and the preponderance of anti-Western media sources, these negative attitudes could develop even further.

Targets of disinformation include those states which play important roles in Euro-Atlantic integration processes. For instance, in spring, 2016, in the midst of controversy surrounding visa liberalization, the information agency Saqinform published an article alleging that Angela Merkel is the daughter of Adolf Hitler. In the same article, Saqinform wrote that “exactly those European and American supreme powers are characterized by voluptuousness and domestic treason, lewdness and sexual violence.” Saqinform an anti-Western and pro-Russian media source. This is important to note, because, according to The Media Development Foundation’s report, “Anti-Western Propaganda. Media monitoring report 2014-2015”, media is the main driver of anti-Western attitudes in Georgia.

In order to combat this kind of propaganda, the state should: a) create instruments for fighting disinformation; and b) help Georgian society to understand the benefits of Euro-Atlantic integration. Effective action is necessary for avoiding negative influences on attitudes toward the EU and NATO, due to the risk of these attitudes decelerating the integration processes.

The Case of Georgia and the MAP

Despite high expectations, Georgia did not receive a MAP at the 2008 NATO Summit in Bucharest. A process which was actively supported by Bush administration in the US ran into resistance from NATO’s European members, most notably, Germany. After the March 2008 presidential elections in Russia, Germany hoped that under the Dmitry Medvedev administration there was a greater chance for Russia’s modernization and improvement of relations with the EU.

Besides, Berlin supported renewal of the “EU-Russia Partnership and Cooperation Agreement”, which had expired the previous year. In the German view, Bush’s pushing of NATO accession for Georgia and Ukraine could damage European-Russian relations and stimulate destabilization in Russia’s neighborhood, factors which threatened Germany as well. Before the Bucharest Summit, in February 2008, Putin openly threatened that in case of NATO accession he would not exclude the use of nuclear weapons against Ukraine.

Germany was unsettled by these developments. Since unification, it has taken on the function of a “bridge” between Russia and the EU, and between Western and Eastern Europe more generally. This role reflected positively on Germany’s political and economic influence. By 2008, trade turnover between Russia and Germany reached 60 billion euros and roughly 4,600 German companies had a presence in Russia.

The relationship spilled over into Germany’s ties with Georgia, but not without some pushing from the authorities in Tbilisi. Events in Georgia in November 2007 in particular made it easier for Germany to argue in favor of withholding the MAP: the Georgian government’s pressuring of the media and the instrumentalization of justice created an opening for Berlin to argue that, because of internal political crises and the eroding quality of democracy in Georgia, NATO integration was premature. Georgia first needed to solve its internal problems and think about membership later.

By March 2008, Germany’s position was well known. Despite that, before the Bucharest Summit the Georgian government continued to publicly express the belief that Georgia would soon become a NATO member. Later that year, following the August War, Germany tried to renew the Cooperation Agreement between the EU and Russia. In an interview with TAGESSPIEGEL, Georgian President Mikheil Saakashvili urged the German government to “avoid betrayal” of Georgia. Also, following the August War, Georgian government representatives openly accused the West of not preventing the war. According to them, by refusing to grant the MAP to Georgia, the West (meaning Germany, first and foremost) gave Russia a green light to invade.

In the context of NATO integration, popular attitudes toward Germany still tend to be negative, which negatively affects attitudes toward NATO integration in general.  To sum up, after the Bucharest Summit, to a certain extent the anti-German rhetoric produced by political elites damaged Georgia’s relations with Germany. Due to the paucity of communication with Georgian society to explain complex dynamics and the failure to take into consideration ongoing intra-European processes, false expectations were formed, which evolved into negative attitudes toward Germany.

The Case of Visa Liberalization

The degree to which Georgia’s integration is influenced by the internal politics of European states was made obvious in June 2016. Germany delayed the visa liberalization process. Despite the fact that it has supported Georgia within the framework of the Eastern Partnership (EaP) and is Georgia’s second-leading bilateral partner in terms of economic development (after the United States), it headed the list of countries (including France and Italy) lobbying for the so-called “suspension mechanism.” In Georgia, where it was—rightly—expected that the process would not be delayed, negative attitudes toward Germany have grown. The reality, however, is much more complex than the popular narrative. In early June 2016, a wave of negative press coverage came out in the German press. These articles focused on an alleged increase in the amount of organized crime activities conducted by Georgian immigrants, with the implication being that visa liberalization would result in even higher crime rates. These views were expressed in prominent German publications such as BILD, SPIEGEL, FOCUS, and DIE WELT, and authors included the Minister of the Interior of the state of Bavaria Joachim Herrmann (Christian Social Union (CSU)) and Armin Schuster, a parliamentarian from the Christian Democratic Union (CDU).

A Georgian criminal element indeed exists in Germany and there is large-scale abuse of the asylum system by Georgians. However, these issues were exaggerated and instrumentalized for political profit. In 2015, Georgians accounted for 0.3 percent of total criminal suspects in Germany. Also in 2015, Georgian burglary suspects accounted for only 6.4 percent of all foreign suspects. According to country-by-country rankings of the total number of crimes committed by foreigners, Georgia was 24th; in Bavaria, it was 23rd.

Germany’s current government is composed of a “Grand Coalition” represented by two factions in the Bundestag. The first is the Christian Democratic Union (CDU) and the Christian Social Union (CSU); the second faction is composed of the Social Democrats (SPD). The CSU is the leading force in Bavaria’s regional government.

The Grand Coalition has not put up a united front on migration issues. From the beginning, the CSU opposed Angela Merkel’s open migration policy. That policy has also been opposed by some members of her own party, including Armin Schuster, a leader on international affairs issues. Also worth mentioning is that, in June 2015, approval ratings for the right-wing populist and Eurosceptic Alternative for Germany (AfD) reached 14 percent. AfD was established in 2013 and by 2014 was represented in the parliaments of 10 of 16 regions. Paralleling the rise of AfD, the CDU and SPD saw rising approval ratings: in June 2015, 32 percent and 19 percent, respectively. By contrast, the CDU’s rating fell to 40 percent in Bavaria.

The success of the right-wing populist and Eurosceptic AfD is driven by the following factors: a) protest among the electorate against the politics of existing political groups; b) an influx of migrants into Germany (more than one million in 2016); and c) broad trends in favor of Eurosceptic and populist movements in Europe and elsewhere. These factors dovetailed into opposition to visa liberalization. Certain populist political groups, including AfD, opposed the Chancelor’s migration policies in order to compensate for their electoral weaknesses and to raise their political profile.

The instrumentalization of issues such as migration and visa liberalization exert a powerful influence on Georgia’s efforts toward Euro-Atlantic integration. For example, the newspaper SPIEGEL claimed that a majority of home burglaries committed in Germany were committed by Georgians. Only after the intervention of Georgia’s Ministry of Foreign Affairs and the Georgian Ambassy in Germany, who asked for the source of the data presented in the article, SPIEGEL’s editorial staff replaced the word “majority” with “much.”

The tendency toward growing right-wing populist and Eurosceptic movements extends to Eastern as well as Western Europe. Against the background of this tendency, growing pressure has been exerted on liberal society. Unsurprisingly, this pressure and the reactions to it have repercussions for foreign policy, including for Georgia-EU relations. The complexity and uncertainty of the relationship means that Euro-Atlantic integration must not become either a matter of either excessive euphoria or skepticism in Georgia. In order to ensure that expectations remain fact-based and realistic, the state should attempt to manage information in two main directions: