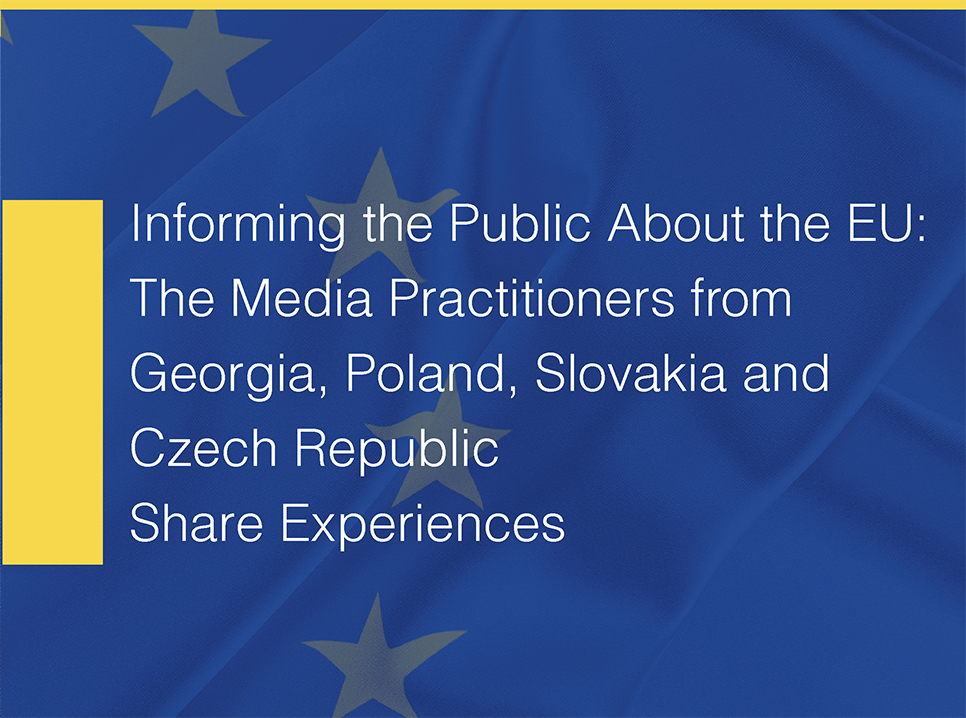 This report was commissioned in view of the deepening political polarization, rising populism, growing Euroscepticism and anti-Western movements as well as concerns over fake news, disinformation and propaganda in the media in the countries where the research was carried out.

This study focuses on the experiences of the media practitioners in Georgia and three of the four Visegrad countries—Poland, Czech Republic and Slovakia—when reporting on EU-related issues. The more specific aim of this study was to provide insight into the different approaches that Georgian media professionals employ and the choices they make, when reporting on EU-related topics. The research results from the media of Slovak and Czech Republic and Poland provide a picture of how journalists work elsewhere as well as the potential best practices from the journalists of these countries. An important factor for the selection of the media from EU member countries in Eastern and Central Europe was their experience working under authoritarian regimes, in the times of transition and in the process of joining the EU in early 2000s. Today too, when many countries in Eastern and Central Europe are facing problems stemming from a political and ideological crisis and unpredictability, it has become necessary to explore how the (quality/mainstream) news media are handling these complexities when informing their audiences. The experience of the media in EU member countries could serve as a good example for the Georgian media now, during the country’s slow approximation to the EU and the plethora of internal problems, particularly the growth of right-wing discourses fed and fueled by Russian propaganda. Amidst these challenges, the question arises as to how journalists in Georgia, Slovakia, the Czech Republic and Poland are helping their audiences learn about the EU.

This report is based on a survey of 94 representatives from media outlets in four countries, including news editors as well as journalists and producers— out of the group, 19 were also interviewed. Forty-five of the respondents identified as editors, 8 said they work as news producers and 41 said they work as journalists. Since Georgia is the main focus of this report, the largest pool of respondents (59 from various media outlets) came from there. The research found that despite the differences created by the various conditions in which the journalists work, they share many aspects about how they approach reporting on EU-related topics.

This report is part of the project “Experience-Sharing of V4 Countries to Promote Media Professionalism in reporting Georgia’s European integration,” funded by the International Visegrad Fund and implemented from October 2018 – August 2019. The project aims to promote more informed discussions on topical issues such as EU integration and DCFTA implementation; contribute to dispelling anti-EU myths and countering Russian propaganda; and promote media expertise on Euro integration issues.

The project was implemented by an international consortium led by the Georgian Institute of Politics (GIP) in partnership with GLOBSEC Policy Institute (Slovakia), Masaryk University (Czech Republic) and the Institute of Public Affairs (Poland).