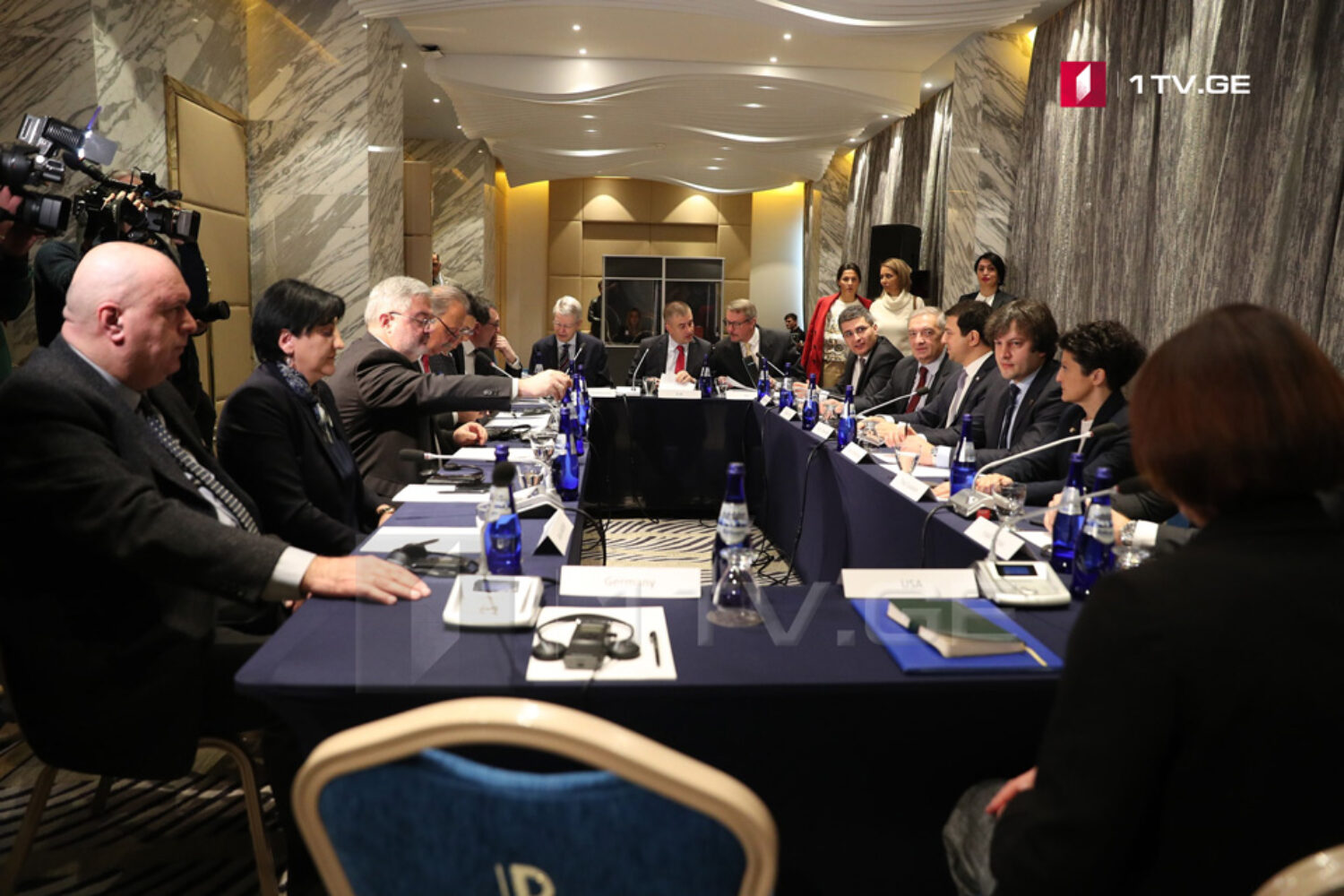 Georgia has faced an unfolding political crisis over the last few months. Despite the active participation of trustworthy international actors, including the President of the European Council in the post-election political dialogue, there are still no signs of consensus and negotiations remain quite tense.

Considering the government’s plan to further Georgia’s Euro-Atlantic integration and apply for EU membership in 2024, a constructive inter-party dialogue, and an fair solution to the political crisis in the country is essential. As always, the uncompromising tactics and positions of existing political parties hinder an effective agreement.

During the election period, the Georgian Institute of Politics (GIP) conducted more than 30 in-depth interviews in a closed format with experts and political party representatives focusing on the effectiveness of communication among political parties in Georgia. Drawing on the collected data, we discuss why political parties have failed to engage in a constructive dialogue, and additionally, how to stimulate long-term inter-party communication based on compromise.

An Unstable Political Environment: Why Political Parties Fail at Forming a Constructive Dialogue

National and international reports following the 2020 Parliamentary elections in Georgia indicate that the lack of healthy, rules-based competition among political parties remains a problem. While communicating with each other and their electorate, political party representatives often use language that is openly aggressive, and rhetoric which is both uncompromising and damaging to healthy competition. Based on interviews conducted by GIP under the framework of the project, “Monitoring of the Code of Conduct for Political Parties”, we can analyze how experts and political party representatives perceive the importance of certain characteristics of Georgia’s political impasse.

The analysis revealed that there is a significant difference between the vision and motivation of the ruling party and that of the united opposition, as well as between the bigger and smaller parties. As each political actor has their own political objectives, they operate in different political contexts. Therefore, their ideas about a healthy political environment are often quite contrasting. According to some respondents, the resources of the ruling party, both in terms of agenda setting, and its administrative execution, significantly exceeds the resources of opposition parties. As such, the ruling party has a greater responsibility in the formation of a healthy political environment. Additionally, the ongoing Covid-19 crisis makes it more difficult for opposition parties to replace the incumbent government. Consequently, effective inter-party cooperation, as well as an active, clearly confrontational opposition to the ruling party has become a priority. Based on interviews conducted, there are three main factors which can be seen as obstacles to a long-term stable dialogue: the personalization of politics, the lack of issue-based political communication, and misperception of the electorate’s needs.

The Personalization of Politics

Some experts and political party representatives point out that Georgian politics is overly focused on personalities with political processes overwhelmingly revolving around specific political figures. According to respondents, the intensity of the language employed by a political actor is often determined by the target of the message. This kind of approach is an obstacle to the formation of a reasonable political environment or an effective political dialogue. It is also worth noting that research shows the Georgian electorate is facing the same problem, prioritizing a specific candidate rather than the party the candidate represents. In modern-day Georgian politics, personalized political discussions are mostly focused on the individual leaders of political parties in the country. This practice makes the party platforms and issue-based narratives less prevalent.

For example, the rhetoric employed towards the United National Movement often revolves around Mikheil Saakashvili. It is worth noting that certain members of the ruling party even linked Nika Melia’s detention to the personal ambitions of Saakashvili. On the other hand, the rhetoric directed towards the Georgian Dream is usually focused on Bidzina Ivanishvili and his personality. The opposition at one point even mentioned that Ivanishvili’s departure from the party and politics would further delegitimize the parliament as there is a perception that, “those who voted for 41[Georgian Dream], … did so because of Ivanishvili”.

Political, “assaults” directed towards specific people is a dominant mechanism of Georgian party politics. Unlike issue-based constructive rhetoric, this type of communication can be easily transformed into a defamation strategy through personalized negative campaigns.

The lack of issue-based communication is one of the most commonly cited factors which hinders political parties from pursuing reasonable political campaigns in line with national objectives. This remains a long-standing challenge for Georgian political culture. Issue-based discussions are not of primary importance for political parties. The lack of issue-based debates can be clearly seen in the ruling party’s absence from inter-party public discussions. Consequently, a meaningful and reasonable discussion around current policies is virtually impossible. Additionally, the majority of the parties do not actually have a realistic, result-oriented political program of their own. Political campaigns rely on promises directed towards manipulating the electorate, with meaningful, inter-party debates around electoral issues almost non-existent.

Moreover, some political party representatives point out in their interviews that small parties are, “compelled” to replace their original rhetoric with more radical rhetoric in order to maintain their visibility in a competition with the bigger parties. Based on the aforementioned logic, political communication is predominantly focused on these not issue-based, “anti-campaigns,” which turns into aggressive rhetoric directed towards political opponents with the aim of attracting voters. Issue-based inter-party communication can be a solution to this ongoing political deadlock. It has a potential to both become a starting point for an effective dialogue in the short-term, and for establishing a compromise-based political culture in the long-term.

The Peculiarity of the Georgian Electorate: A Demand for Polarization or a Political Party Agenda?

However, against the background of the aforementioned expectations, recent public opinion polls revealed that in reality, public demand is not linked to confrontational and explicitly polarized political factors. According to the Caucasus Research Resource Centers (CRRC), the Georgian public is much more favorable towards political processes based on collaboration (chart 1) and multi-party representation in the parliament (chart 2). 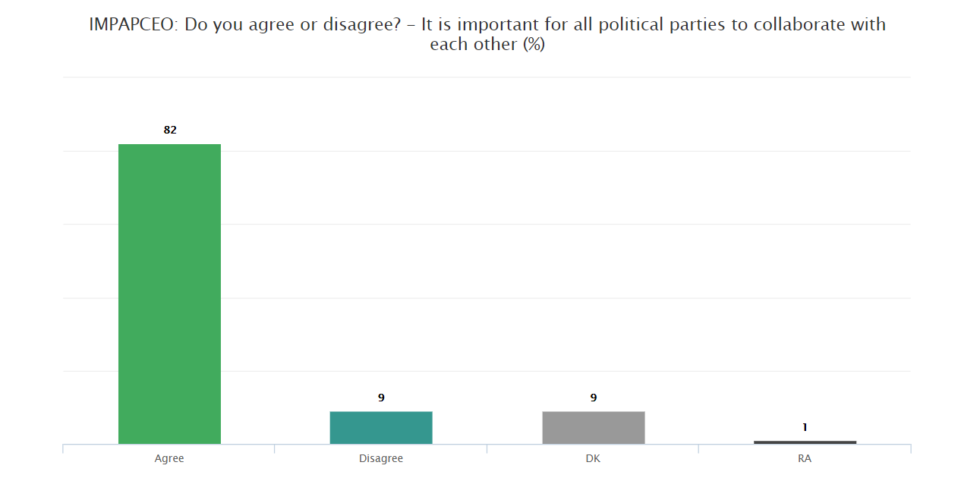 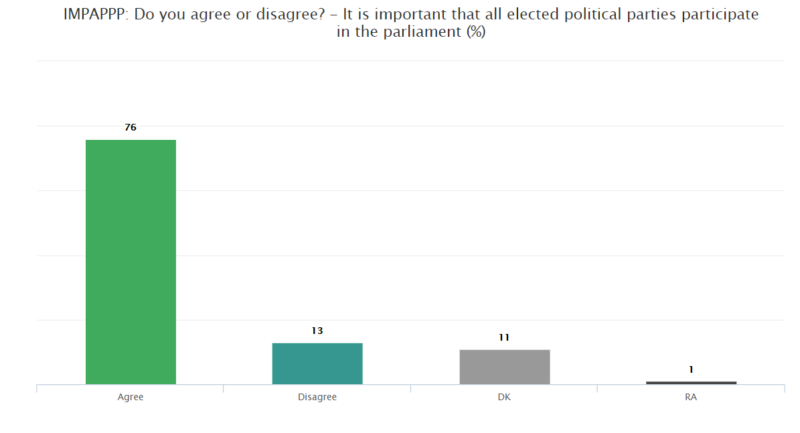 Moreover, in parallel with ongoing protests in Tbilisi, recently emerged economic and environmental problems connected to the construction of the Namakhvani Hydropower Plant, have led to a large-scale rally in Western Georgia. These protests show once again that issue-based problems might prove more important for the public than the polarization and radicalization of the political realm.

Discussion around these issues is important as civil, political, and international society is actively looking for a solution to Georgia’s ongoing political crisis. However, various systemic factors get in the way of political stability. Against this background, the data shows that the high degree of political personalization, the replacing of issue-based discussion with negative rhetoric, and misperceptions regarding the electorate’s demand for a polarized political environment are factors which get in the way of a healthy environment for political dialogue between parties.