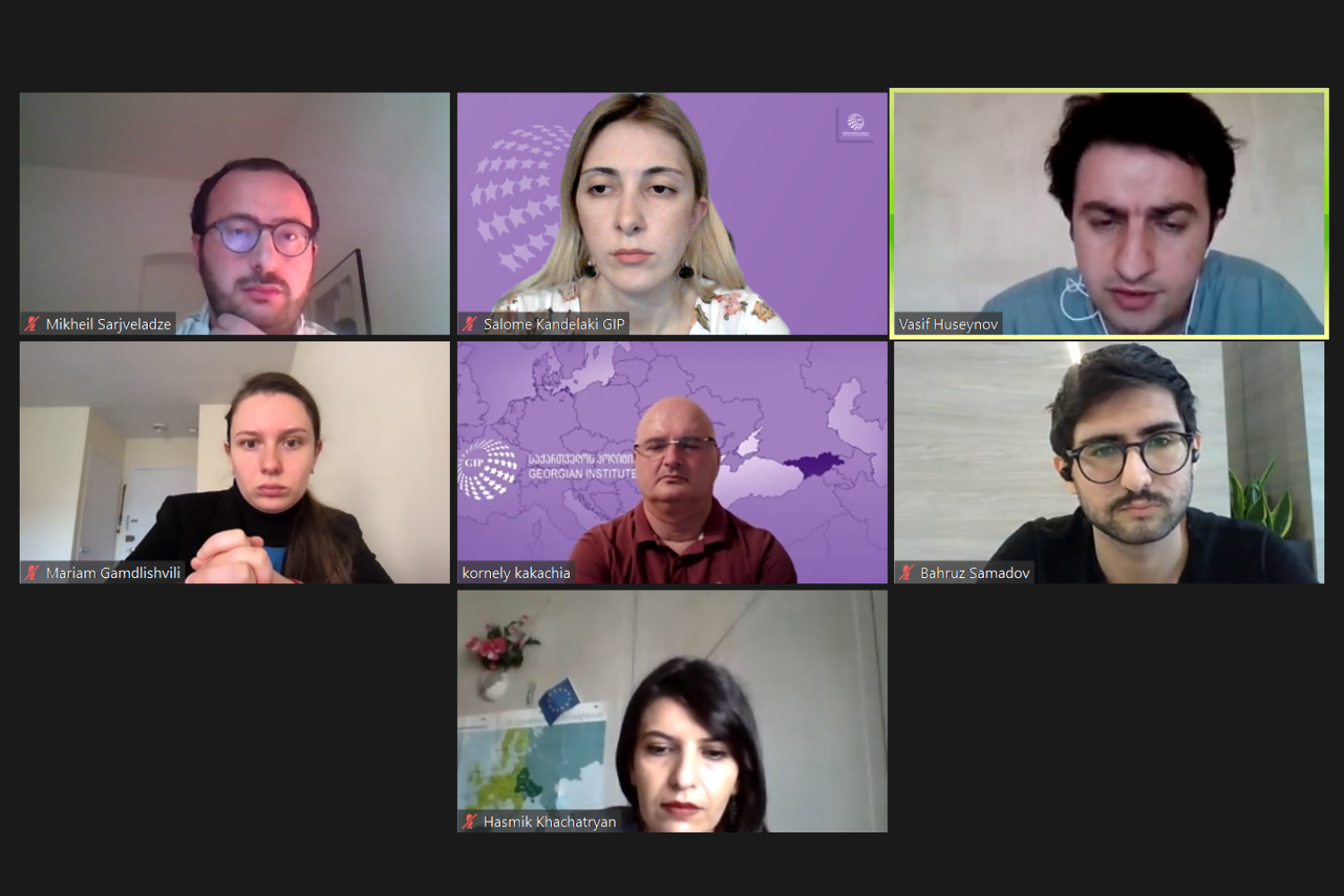 On 31 May, kick off workshop was held for the researchers selected for the project “Analyzing Geopolitical Shifts in the South Caucasus.” The project, which was launched recently, is being implemented by GIP with the support of the Heinrich Boell Foundation Tbilisi Office – South Caucasus Region. It aims at assessing the changing geopolitical and security environment in the South Caucasus, including the role of regional actors, such as Turkey, Russia, and Iran. The project also aims at contributing to developing an informed policy approach towards Georgia, Armenia, Azerbaijan and its consequences for the EU’s impact in the region.

6 young researchers from Georgia, Armenia, and Azerbaijan are now selected for the project in order to conduct the research under the supervision of professional experts about the geopolitical shifts in three South Caucasus countries and their consequences for the SC states and the EU. As a result, GIP will publish six policy briefs produced by young researchers. By doing so, the project team seeks to increase the quality of research and the debate on the geopolitical changes among the experts, young professionals, and policymakers.

The first workshop aimed at facilitating research process, introducing researchers to each other and discussing the working plan for the upcoming months. The main topic of the workshop was How to Conduct Policy Relevant Research delivered by Dr. Kornely Kakachia, Director of the Georgian Institute of Politics (GIP).

Meet these 6 young researchers from Georgia, Armenia, and Azerbaijan: Hasmik Khachatryan has studied Political Science at Yerevan State University (Armenia), Middle Eastern Studies at Lund University (Sweden), and European Politics at the College of Europe (Belgium). Her professional experience includes enrolment at the Association of Foreign Affairs (Sweden) as a Middle East Policy Analyst, at the German Marshall Fund of the United States as a Policy Designers Fellow, and at the Institute of European Democrats (Belgium) as a Foreign Policy Research Fellow. Albert Hayrapetyan holds a PhD in Economics. He is a Senior researcher in ‘Amberd’ Research Center of Armenian State University of Economics and also an Assistant Professor at Chair of International Economic Relations in Armenian State University of Economics. He is also a Visiting Lecturer in the Southern Federal University, Rostov-on-Don. Albert also holds Master’s degrees in European Interdisciplinary Studies from College of Europe and in Political Science and International Affairs from American University of Armenia. His main areas of interest include EU politics, policies and polity as well as the regional integrations. Vasif Huseynov is a senior advisor at the Center for Analysis of International Relations (AIR Center) and Adjunct Lecturer at Khazar University in Baku, Azerbaijan. He holds a PhD in Political Science from University of Göttingen (Germany), an MA in Global Political Economy from University of Kassel (Germany) and a BA in International Relations from the Academy of Public Administration (Baku, Azerbaijan). Dr. Huseynov’s studies in Germany were supported by full scholarships of German Academic Exchange Program (DAAD).  He has previously worked for the Center for Strategic Studies under the President of the Republic of Azerbaijan (SAM) and ADA University in Baku. 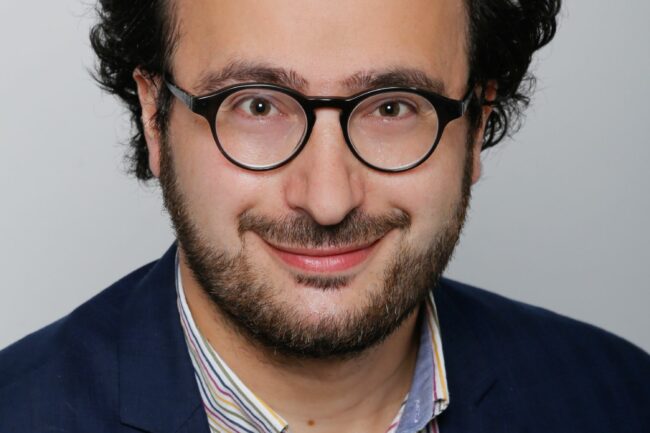 Mikheil Sarjveladze is a visiting fellow at the German Institute for International and Security Affairs (SWP) within the framework of the research scholarship of the Konrad Adenauer Foundation. At SWP he researches the foreign policy of the South Caucasian countries in the context of the disintegration of the post-Soviet space. Mikheil Sarjveladze holds a PhD in political science from the University of Cologne and a Master’s degree in politics and history of the 20th century from the University of Jena. Mikheil Sarjveladze studied German Language/Literature and Social Sciences at Ivane Javakhishvili Tbilisi State University and University of Gießen. He gained professional experience at the Universities of Jena and Cologne, the German Bundestag, the South Caucasus Office of the Konrad Adenauer Foundation and the Embassy of Georgia to the Federal Republic of Germany. Bahruz Samadov is a PhD student at Charles University in Prague, where he studies authoritarianism and stability in Azerbaijan. He received an MA in International Relation at Central European University in 2019. His research interests include post-structuralist theories, political ontology, critical theory, studies of authoritarianism and critical approaches to populism. His opinion articles are published in media focused on the South Caucasus. 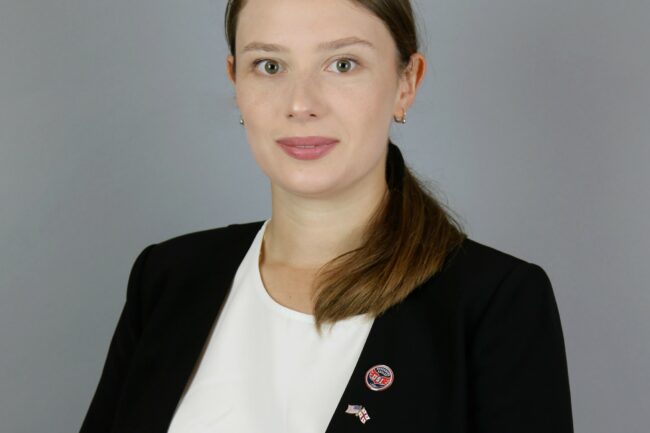 Mariam Gamdlishvili is an Edmund S. Muskie Fellow at the George Washington University’s Institute for Public Diplomacy and Global Communications. Mariam’s experience includes working on Georgia’s European and Euro-Atlantic integration, strategic and global communications, dis/misinformation topics at the Digital Forensics Research Lab of the Atlantic Council, Ministry of Foreign Affairs of Georgia, Georgian Center for Strategy and Development, Office of the State Minister of Georgia on European and Euro-Atlantic Integration. Mariam recently received an MA degree in Communications from the University of Southern Indiana in the frames of the Fulbright Program, funded by the U.S. Department of State. She also holds an MA degree in European Union Studies (CIFE Erasmus +), and BSc degree in International Relations. Mariam’s research interests include communication studies, disinformation, soft power, global/political and international communications, public diplomacy, focusing on Eastern Europe, South Caucasus, and Russia.