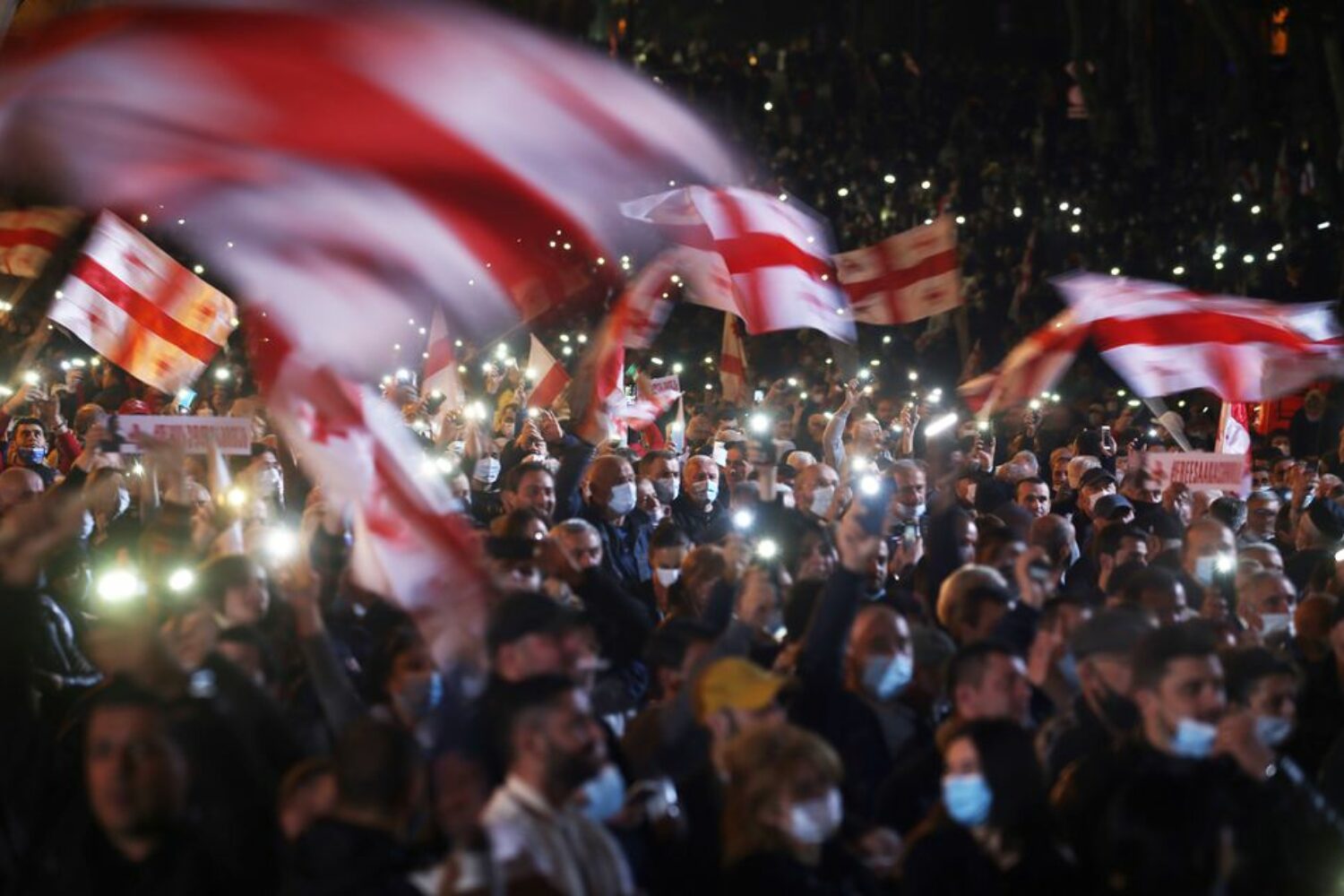 In Georgia’s endless political crisis polarization is cited most widely as the explanatory factor. The 2018 Presidential, 2020 Parliamentary, and 2021 Local elections were all characterized in international and local reports by aggressive rhetoric, verbal and physical confrontations and negative campaigning. In the prolonged post-electoral political crises, it has proved difficult to break the deadlock of destructive rivalry between the dominant powers and political turbulence still lasts. So, it is timely to discuss what exactly drives polarization in Georgia and what are the gateways to overcoming the polarization trap.

Polarization: Fueling Factors and Where to Find Them

According to the Caucasus Research Resource Center (CRRC) survey of July 2021 more than half the respondents could not identify ideologically with any of the Georgian political parties. When it comes to election results, votes are distributed mainly between the two dominant actors – the ruling Georgian Dream and the largest opposition party, the United National Movement. In the 1st round of the 2021 Municipal Elections in Georgia approximately 77% of the voters were either for GD or for UNM (Table 1). 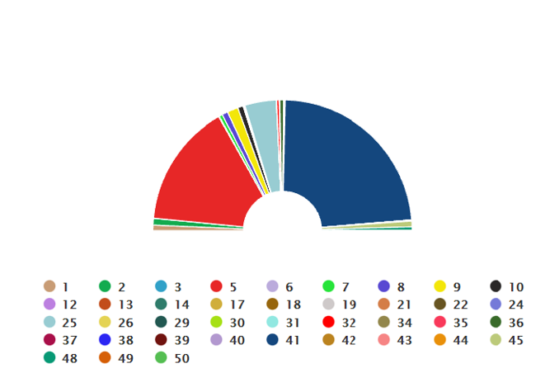 Table 1: Visualization of vote distribution in the 1st round of the 2021 local elections. The dark blue is for the ruling Georgian Dream party (46.74%) and the red is for the United National Movement (30.67%). Source: https://results.cec.gov.ge/#/ka-ge/election_45/dashboard

According to some data, the existence of extreme polarization in Georgia is not obvious because the question of how the two leading parties differ in terms of their positions on specific policy issues is rarely addressed.  However, a number of Georgian and international pundits have noted that polarization in Georgia cannot be understood in its classical meaning: as a deep ideological division of opinion between two groups of society. There are particular factors distinguishing the specifics of Georgian polarization.

Radicalized Georgian politics is noticeable aspect of political polarization in the country. Local and international reports prior to the 2020 and 2021 elections talk about the escalating negative rhetoric, demonstrations of uncompromised hatred on electoral banners, and physical clashes between the leaders of the two dominant parties. The radicalized environment overshadowed policy-related issue-based conversation, generating the deadlock of the political crisis in Georgia.

Georgian politics imagined as a zero-sum game by the political parties makes polarization tenser. In the Georgian political arena “the winner takes all”, or the winner is more capable of taking it all. And the parties don’t have any guarantees that when in opposition, their rights would be protected and their representatives would be involved in the legislative or executive processes. A fierce fight against the former ruling UNM, with the arrest of its leaders, shapes the Georgian polarization deadlock. The sarcastic rhetoric of the ruling GD leaders towards the imprisoned Mikheil Saakashvili, who has been on a hunger strike for more than a month, is a showcase of the uncompromised shape of Georgian politics.

An important factor fueling the political polarization is the personalized political strategies of the two dominant parties, which are successfully deployed to mobilizing the segment of voters believing in the need of one “strong” leader. Western actors have criticized the political processes accumulating around two poles: Bidzina Ivanishvili and Mikheil Saakashvili, considered as informal chiefs of GD and UNM. This factor was particularly obvious after Saakashvili’s arrest. When reporting the news, PM Irakli Gharibashvili congratulated society on “Bidzinaoba” (unofficial day of Bidzina) referring to Bidzina Ivanishvili’s “heroic” fight against his personal competitor. The Saakashvili events, which led to a new wave of demonstrations by the opposition as well as the ruling party, came in the second round of the local elections. Thus, the capacity of personalities to radicalize society around one or another pole, especially when it comes to election results has, according to some, been affected by the Saakashvili factor.

Sections of the media with a distinct political agenda help spread radicalized polarization among the public. As the media monitoring results have reported, especially prior to the elections of 2020 and 2021, media-polarization has increased: Rustavi 2 and the Georgian Public Broadcaster, which before had maintained neutrality in their political editorials,  have tended to become more pro the ruling party. Some media channels have even officially declared that they are intentionally working against a particular political party. The media has provided extensive coverage of biased negative contexts instead of issue-based debates or specifically,  involving all parties to discuss both the country’s performance in different policy areas and their visions.

Three types of actors can adopt roles of de-polarizing players in these circumstances – the President, the small opposition parties and international society.

The President has recently emerged as the neutral force between the confronted political actors. President Salome Zurabishvili has launched a series of balanced statements promoting the importance of consensus, the perspective of coalition and stable inter-party dialogue. When elected as president in 2018 she was supported by GD. Though recently, her rhetoric is not distinctly pro-ruling party. President Zurabishvili stated that she will never pardon Saakashvili. However, she can still contribute by suggesting a de-polarizing narrative to the parties and by providing an efficient platform for them to launch consensus-based dialogues.

Small opposition parties can still play a big role in balancing the rivalry-torn environment in Georgian politics. In this regard, the offer of trilateral negotiations from the former PM and the leader of the second electorally successful opposition party, led by Giorgi Gakharia, was noteworthy. According to some, the avoidance- runoff endorsements for the round in the local elections by some opposition parties can also be considered as an important de-polarizing factor. Small parties usually adopt platforms that are more issue-based and thus they have a good chance of balancing the two centers of gravity in Georgian politics. One way of achieving this is for the opposition elements in parliament to strengthen the advocating of their visions through parliamentary conversation. Also, small parties can permanently discuss and even criticize the two dominant parties’ policies and strategies, rather than joining the bandwagons, to avoid their voices being absorbed by the dominant narratives.

International Society ­ also has important leverage to make a positive impact through critical appeals against the parties’ radicalized strategies. The EU mediation had been of crucial importance in creating the precedent of consensus-oriented interparty dialogue in Georgia. However, the annulling of the official agreement brokered by Charles Michel demonstrated how deep the polarization deadlock is in Georgia. Rules of the game for westernization and Euro-Atlantic integration are based on the conditionality principle through which international actors should be strong de-polarizing factors in Georgian politics. This process can be enhanced by supporting the local Civil Society Organisations working on the issues of democratization and improvement of the political environment in Georgia.

The pattern of political polarization in Georgia is based on hatred, the principles of a zero-sum game, and personality-based strategies which are also spilling over onto media agendas, rather than adversarial ideological and policy-related policies. This makes the negative impact of polarization even more dangerous a threat to development towards a more democratic and consensus-based political culture.

To reduce the level of political polarization in Georgia external pressure should be maintained on the leading parties, combined with alternative domestic solutions to balancing their political dominance. The President and small opposition parties can adopt the roles of de-polarizing actors in cooperation with international society.