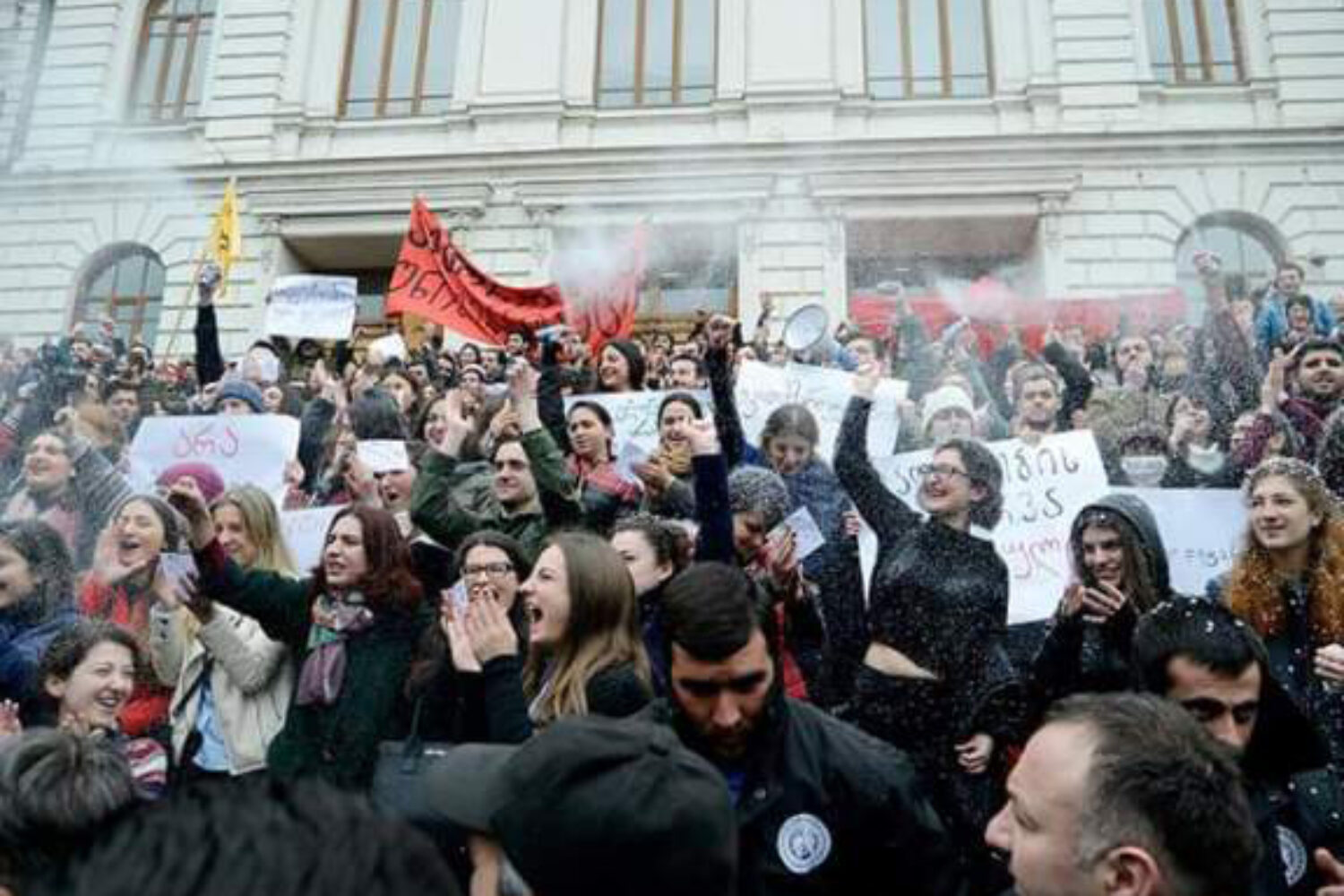 Over the last couple of years, Georgia’s protesting scene has experienced an interesting transformation – the emergence of self-organised groups and networks, exerting direct pressure on the state instead of relying on political parties and the international community. This blog post focuses on three examples of such collective action – student, ‘raver’ and worker protests.

From ‘Solidarność’ to ‘Gilets Jaunes’, recent European history shows the sweeping power of protest movements in the process of democratisation and social transformation. However, such developments have largely been hindered in Georgia and some other Eastern European countries by civil wars, conflicts and economic collapse in the early 1990s.

While traditional institutionalised structures of civil society have long been around in the socio-political life of the country, in recent years, Georgia experienced an emergence of new social networks and left-leaning grassroots movements willing to mobilise, organise themselves, exert direct pressure on the state system and demand functioning social policies and thorough protection of their civil liberties. The wider society is not indifferent either. Since 2011, the number of those who think that people ‘should participate’ in protest actions almost doubled (62 percent in 2017).

The culture of civic protests is one of the prominent characteristics of modern Georgian society. Short-lived and thoroughly planned, anti-Western and anti-Russian, partisan and independent – we have seen all kinds of protests with political, social, nationalistic or gendered narratives over the past quarter of a century since Georgia broke free from the Soviet Union. As of today, “protesting everything” became such a basic feature of everyday life that touristic agencies could include it in sightseeing tours. Furthermore, being on a demonstration is the only time when people actually take back control over sidewalks, usually transformed into the parking lots in Tbilisi. 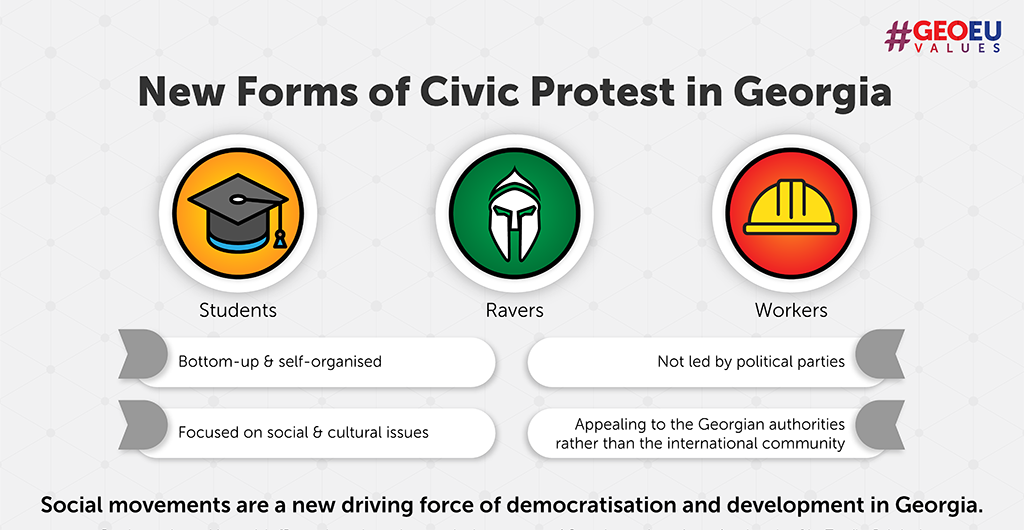 In the last two years, however, something has changed in the very fabric of these protests. Previously, people took to the streets in a reactive manner and went back home after short outbursts. Otherwise, all the major long-lasting demonstrations were organised by political parties. Civic protests were mostly affiliated with political parties or NGOs and other organisations, which were demanding attention from the international community, embassies and major media outlets to have an influence on Georgian politics, counting on the normative power of the EU or the US.

But since 2016, we are observing signs of planned resistance activities from specific self-organised societal groups asserting their own agenda, instead of relying on political power mediums and external pressure. These groups are not many, although they have supported each other on several occasions and attempted to establish a basic network for cooperation. While they do not ban various political parties from attending their demonstrations, the organisers mostly distance themselves from political figures. Cooperation with a number of NGOs seems to be stronger – they provide legal support when dealing with law enforcement, for example, but those self-organised groups are leading the action and usually they do not share their power over the course of action with others.

Shortly introduced below are three major examples of movements or planned collective action that shared the aforementioned features, had their complications and interconnections, wins and losses: protests of students, ‘ravers’ and workers:

All three movements, which were themselves intertwined with many other smaller ones, closed a major chapter of their struggle once the state showed them a “humane face”. The movements got promises directly from high-ranked officials and invitations to the ministries for future legislative planning. Entangled in this web of bureaucracy, they, however, then lost momentum and public support. The process of decision-making was not clear and transparent enough during these discussions behind the curtains. With several exceptions these movements were and still stay heavily concentrated in Tbilisi, which speaks for the problem of extreme centralisation of the country as well as the unequal distribution of power, knowledge and resources. Another, yet growing threat to the further development of such movements are the attempts of public space monopolisation from the side of populist radical right groups and extremists, the ultra-conservative stance of the church on almost every social issue and the government standing aside.

At the same time, the existence and further strengthening of these movements is vital for EU-Georgia relations as well, in the sense that civil society needs to develop a mechanism for direct pressure and keeping the government accountable, instead of constantly seeking for help from outside. An aspiring candidate country should be a functioning democracy with strong internal checks and balances. Furthermore, the European Parliament’s resolutions on the implementation of the EU-Georgia Association Agreement set reminders and recommendations also related to labour rights, education and drug policy in Georgia.

Beyond their indirect role in EU-Georgia politics, the movements of students, ‘ravers’ and workers have the potential to become an actual driving force for future social change. And first and foremost Georgia will need this social change for the sake of its own democratisation and development. There were some wins and even bigger losses for these groups, but they also proved that cooperation and mutual support is possible; they can merge and dissolve, transform and reinvent themselves. After having taken a troubling hiatus in the second half of 2018, next year could be decisive for the evolution or even the mere existence of such social movements in Georgia.