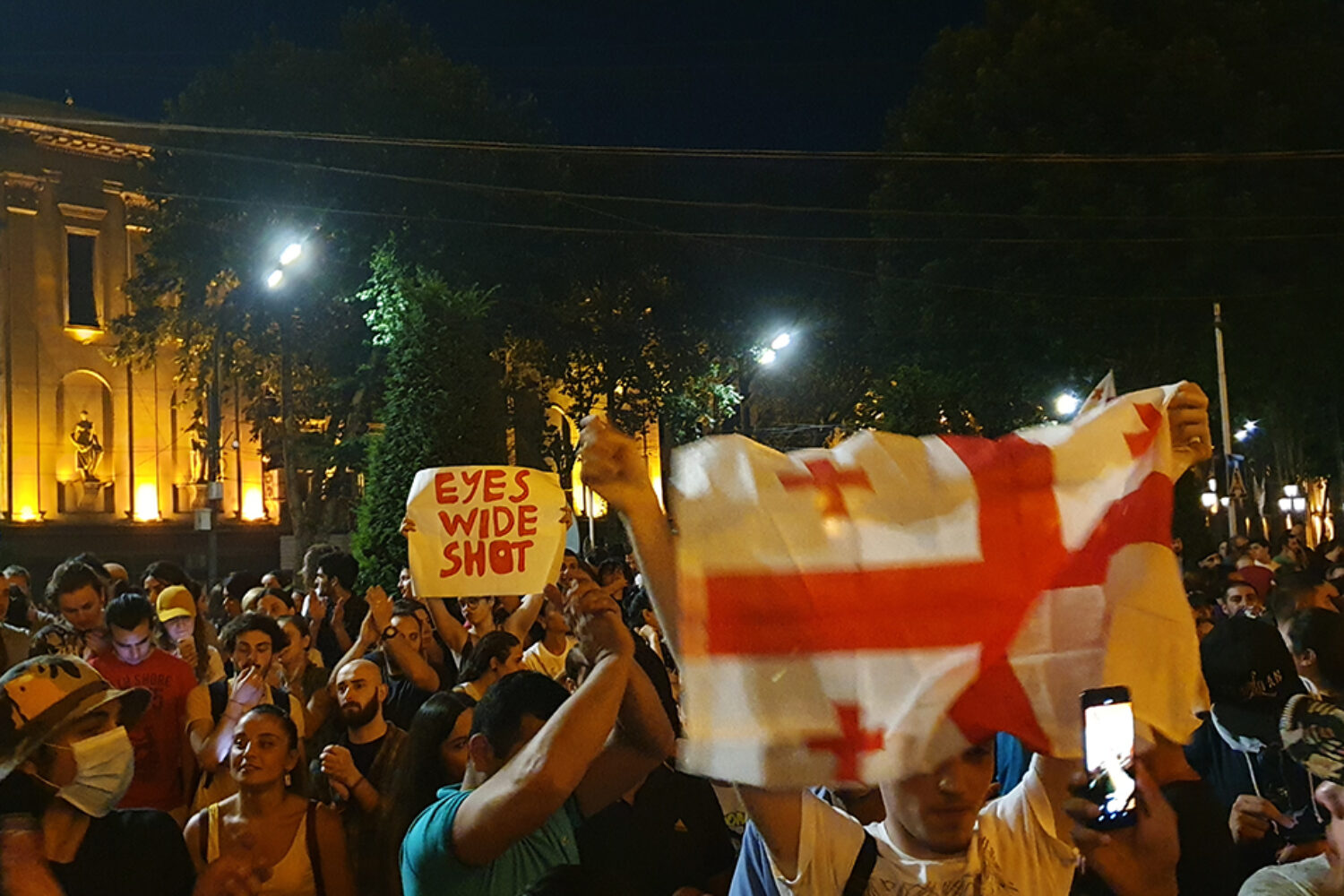 Sparked by the presence of Russian Duma members in Georgia’s parliament, anti-governmental protests in Georgia have rattled the ruling Georgian Dream (GD) party and caused a political crisis. The incident, including the disproportional amount of force used in cracking down on protesters, has further tarnished GD’s already declining image. It has also laid bare the radical nature of the main opposition party, the United National Movement (UNM), which attempted to storm the parliament.

However, the significance of the events goes beyond the boundaries of street protests or party politics. It has showcased the limits of Georgia’s attempts to normalize relations with Russia and highlighted the irreversibility of the country’s pro-Western foreign policy. Both for current and future Georgian governments, this serves as a lesson that Georgian society exercises a veto against any accomodationist foreign policy toward Russia. For scholars of international relations, this is a textbook case of how societies in semi-democratic countries set boundaries and define do’s and don’ts for the foreign policy behavior of ruling regimes.

Georgia’s rapprochement with Russia started after the 2012 change of government, after which GD attempted to restore economic and interpersonal ties between the two countries. This rapprochement was made in the name of a pragmatic and interest-oriented foreign policy. This policy change was not driven by ideological concerns, although the party is mostly supported by a socially-conservative electorate that harbors some pro-Russian sentiments. The party also includes some pro-Russian politicians and factions. It seems that some influential groups within GD sought to persuade the Georgian public of the correctness of restoring political ties with Russia by using economic and social incentives. However, deliberately or not, GD step-by-step moved Georgia into Russia’s political orbit.

From this perspective, the recent protests marked the end of an era. The Georgian public took the political process into its own hands and warned the government that any rapprochement with Russia must remain strictly economic and cultural in nature, and that political rapprochement, even symbolic, crosses a red line. While it’s too early to tell, the aftermath of the demonstrations may stop the government’s seven-year-long project of rapprochement with Russia. That being said, it is important to highlight the Georgian public have nothing against ordinary Russians they only have problem with political Moscow.

From Russia’s perspective, the attempt to use economic incentives as soft power instruments failed to lure Georgia into Russia’s political orbit. For the past few years, Kremlin rhetoric focused on restoring economic and interpersonal ties between the two countries arguably as a precursor of further breakthrough at a political level.  As a result of the rapprochement, Russia became the main export market for Georgian products by a wide margin, especially wines and agriculture products. Numbers of Russian tourists also skyrocketed during the past few years. In 2018, 1.4 million Russians visited Georgia. Tourism, like agriculture, is a very important segment of Georgia’s economy (making up 7.6% of Georgia’s GDP in 2018). Moreover, Georgia still heavily depends on remittances from Russia, which is the second-largest source after the EU. Considering the recent history of Russia-Georgia relations, including a full-scale economic embargo imposed by Russia, Georgian citizens are well aware of the high economic and social costs of a possible Russian retaliation. Nevertheless, it did not stop the anti-Russian demonstrations. The events have again shown that whereas the ordinary Georgians enjoy economic benefits from the increasing number of Russian tourists and trade relations with its northern neighbor, restoring political ties is still out of the question. That is, until Moscow respects Georgia’s territorial integrity and sovereignty and its right to choose its foreign policy orientation.

Arguably the most important instrument of Russian soft power is the shared religion of Orthodox Christianity. The Georgian Orthodox Church (GOC) – the most respected institution in the country – formally supports Georgia’s pro-Western foreign policy but also retains close ties to Russia. Furthermore, the prevailing social conservative values in Georgian society are at odds with Western progressive norms. This factor also makes Russia attractive to some Georgians. Georgian Eurosceptic parties (some of which are considered to be GD satellites) and social groups have capitalized on this cultural cleavage. With the GD government’s tacit approval, anti-European groups have successfully organized large rallies against sexual minorities and immigrants. However, when it comes to political rapprochement with Russia, neither shared religion nor hostility to progressive values can trump the negative perception of Russia’s coercive policies in Georgia. It’s worth noting that that Sergei Gavrilov, the Russian MP whose presence in Parliament sparked the outrage, was in fact the president of the General Assembly of the Interparliamentary Assembly on Orthodoxy. This demonstrates the limits of shared religious identity. Against the danger of Moscow’s increasing influence, different groups within Georgian society have managed to close ranks and speak with a single voice. It is strong message against radical clergy at GOC which was not expected current outcome of the events.

Russia is a non-partisan issue

A negative attitude toward Russia is among the few common denominators that consolidates Georgian  society amid otherwise very strong political polarization and social stratification. The two largest parties in Georgia, the ruling GD and the opposition UNM, have since 2012 radicalized their support bases to extremes. Moreover, a significant part of Georgia’s population still has a very negative attitude towards UNM, a factor driving the recurring electoral wins of GD. The recent protests, however, have shown that the tarnished image of the main opposition party did not prevent protests against the government, at least when it was perceived to be acting in Russia’s interest. Being in “power preservation mode” for some time and lacking any progressive vision for how to transform the country, the ruling party could not allow another anti-governmental resentment spread in Georgian public. It took bloody protests for the authorities to grudgingly acknowledge the present realities and reluctantly bow to public pressure.

Recent anti-Kremlin protests have re-established boundaries for rapprochement between Georgia and Russia. Yet it also increased the security and economic risks for Georgia that must be managed properly by Georgia’s political class. Russia’s frustrated reaction indicates realization by the Kremlin that its soft power toolbox (including access to the Russian market, interpersonal contacts, and Orthodox religion) have failed miserably to alter the negative image of Russia among Georgians. Therefore, if history has taught us anything, recent events could be followed by the Kremlin resorting back to coercive methods and reversing economic and cultural ties. The recent announcement by Russian president Vladimir Putin of cancelling direct flights by Russian airlines between Georgia and Russia could be the first sign. The Georgian government may soon discover that making the country’s economy again dependent on Russia was shortsighted, showing a lack of prudence in dealing both with Moscow and with its own people.