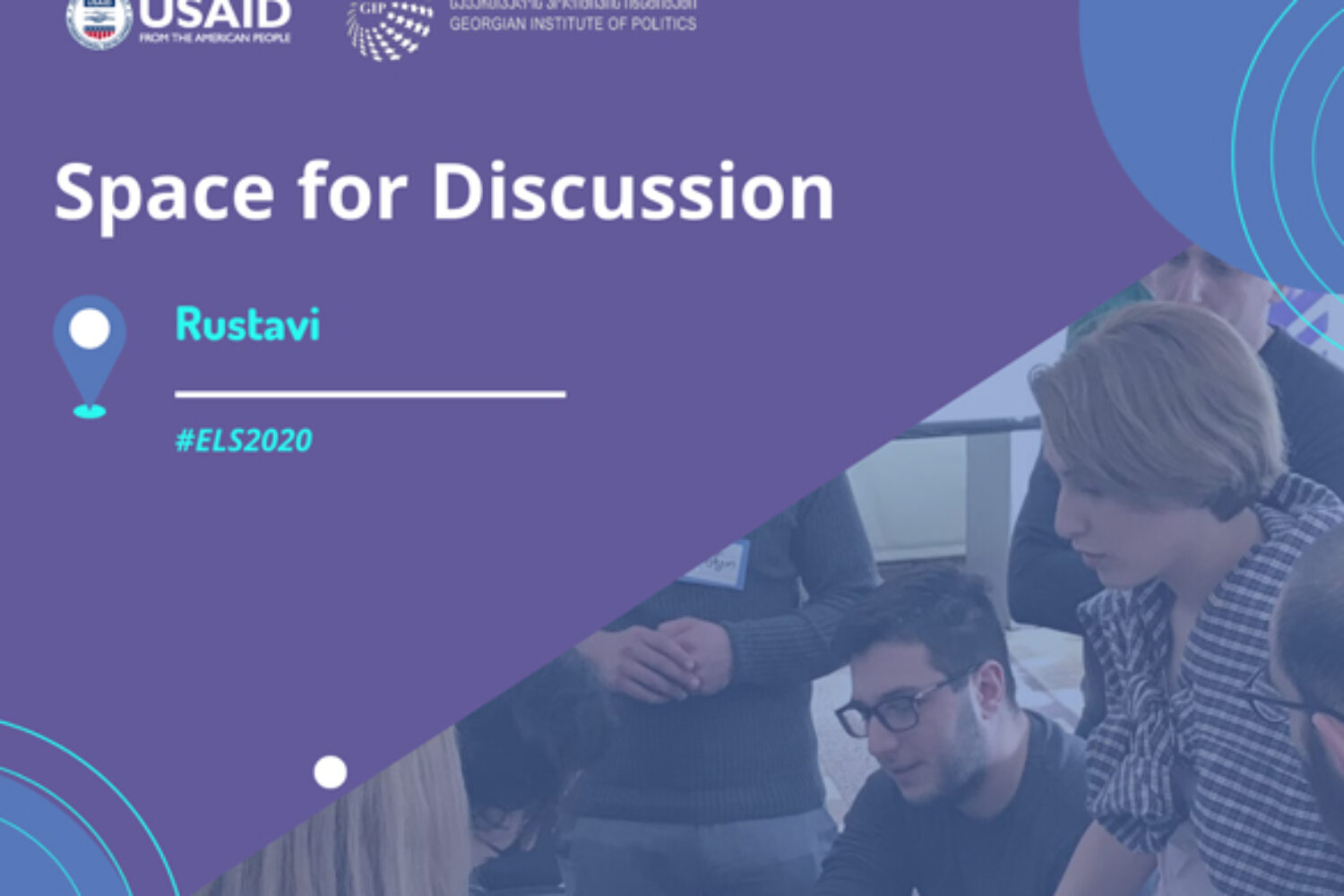 On may 6th, Georgian Institute of Politics (GIP) organized the third event of the Space for Discussion under the “Emerging Leaders School” (ELS).

Space for Discussion is a new series of meetings has launched under GIP’s ongoing project “Promoting Youth Transformational Leaders in Georgia”.Space for Discussion is an additional opportunity for the “Emerging Leaders School” (ELS) participants to meet the experts from different fields as well as public and private sector representatives. The participants choose the discussion topic themselves and have an opportunity to get the answers to the questions of their interest from the invited professionals and decision-makers.

Ongoing Space for Discussion meetings focus on the most urgent issue nowadays – Covid-19 pandemic and the crisis in the country. A local perspective: impact of Covid-19 on Kvemo Kartli region – was the topic that the invited guests discussed together with the participants during the online discussion in Rustavi.

Irakli Tabaghua, who opened the discussion, touched upon several major issues: the status of small and medium-sized businesses in Rustavi, the challenges that sector faces, what are the recommendations issued by the authorities and they ways in which the city hall cooperates with the local government.

As Irakli Tabaghua noted, “every cloud has a silver lining” – meaning that we can clearly see the problems, which can be addressed not only today, but in the future as well. COVID-19 crisis offers an opportunity to create strategic development plan for the cities, which will address the challenges as effectively as possible. Irakli Tabaghua pointed out that doing it is absolutely possible in our country and decentralization of municipalities is essential, which is once more shown by the current situation.

„Challenges are accompanied with some risks, each challenge has a certain period of time when legislative acts need to be made and everything should be organized according to the various fields… If the situation is effectively managed and everything is taken into account, you will achieve success”, – told the Mayor of Rustavi to the discussion participants.

Rustavi is one of the big cities with regard to the production and according to Irakli Tabaghua, they walked on thin ice in this regard. Health professionals in Rustavi assisted the government in that situation. It was important to identify the problem and determine the directions they received later in advance. Namely, Rustavi City Hall created the call center from the beginning, they trained the staff and as a result, they were getting all the information and helping citizens accordingly. They also effectively used the council created earlier on the basis of the municipality amid pandemic. Members of the council represents various fields and their experience was used effectively. Additionally, the Mayor pointed out that the Municipality reserve fund was a great tool for helping socially vulnerable groups in the beginning of the crisis situation. 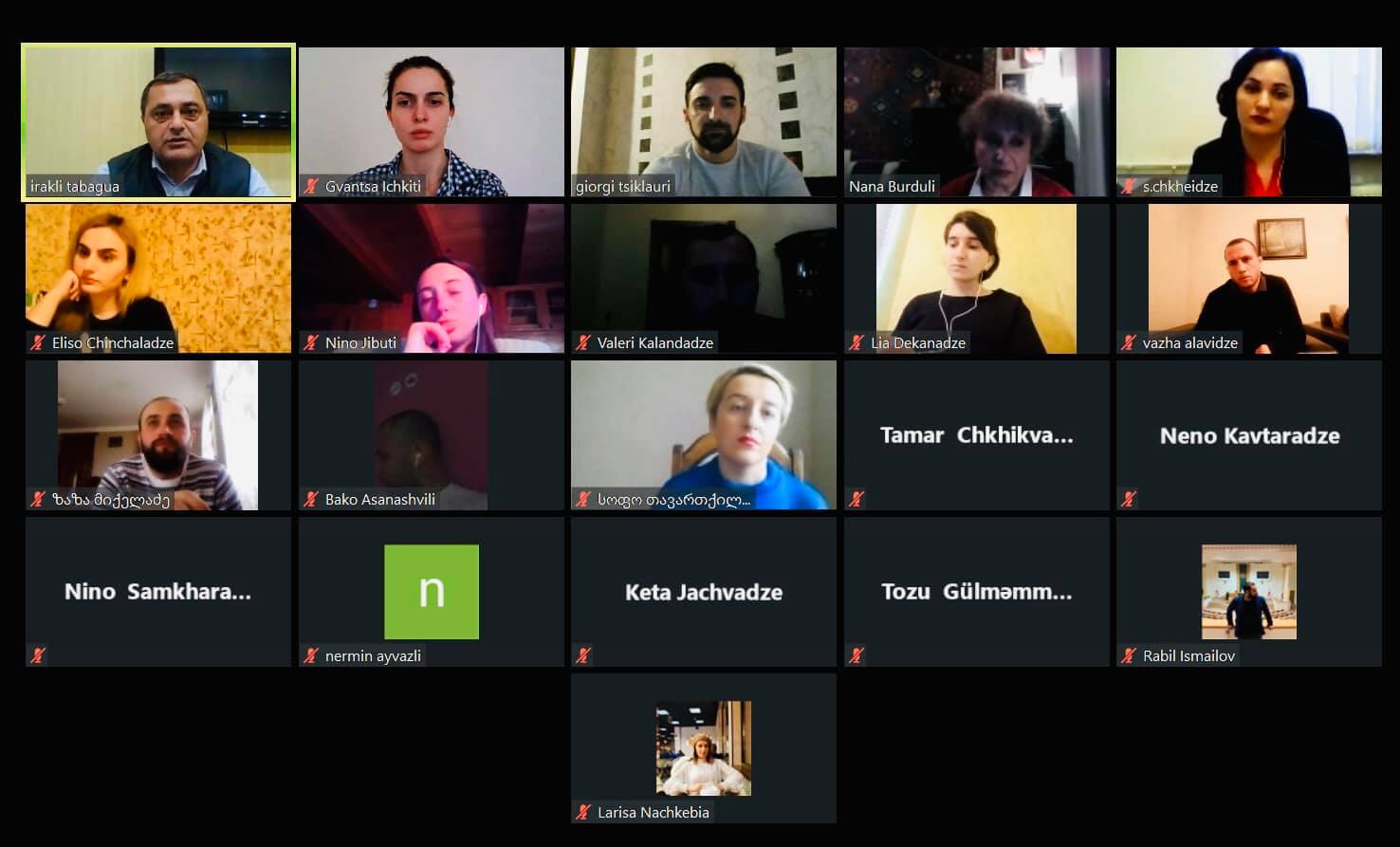 Regarding the infrastructure projects and industrial enterprises in Rustavi, Irakli Tabaghua highlighted that they did not stop working and the city did not suffer much in that direction. The reason for that was that Rustavi City Hall created the strategy for the small, medium, and large industrial enterprises and gave them recommendations before the restrictions came into force. The City Hall is currently monitoring those enterprises on-site using questionnaires and check to what extent they are following the norms and standards set by the government.

ELS participants had an opportunity to pose questions to the Mayor. Those questions mostly concerned the cooperation between the City Hall and small and medium-sized businesses, lifting restrictions on the roads between Rustavi and Tbilisi, following certain norms, and assisting in realization of the products in the neighboring regions; The participants also expressed interest in the views of the Mayor regarding the decentralization of municipalities; Also, to what extent did the City Hall make sure to inform Rustavi citizens who do not speak Georgian language. 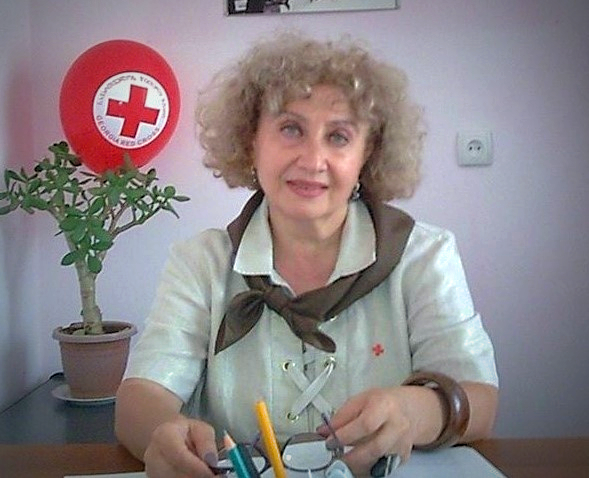 The second speaker of the discussion, Nana Burduli, shared the results of the voluntary campaign conducted in Rustavi by the Red Cross Society.

Representatives from Rustavi also participated in the trainings conducted by the head office of the Red Cross Society. They shared the knowledge gained through the participation in the training with others after returning to Rustavi and according to Nana Burduli, they also started to share information materials in Rustavi.

„We were conducting presentations, displaying posters near various institutions, distributing information booklets in Georgian, Azerbaijani, and Armenian languages. After that, the city hall announced mobilization of the volunteers and we started cooperating with them and joined the team of young peoples. We cooperate with the Liberty Bank, where pensioners get their pensions and we were helping them to control the queues. Disinfecting works were also conducted”, – pointed out Nana Burduli.

In cooperation with the City Hall, the Red Cross information campaign continued with other important activities. The organization started to collect grocery packages for the socially vulnerable groups, senior citizens, and families of many children. The containers were installed in different shopping malls and supermarkets in the city in order to collect grocery products and other necessary items. As Nana Burduli pointed out, Red Cross is doing that for five years and they wanted to do that in Rustavi as well. Overall, the organization helped more than 300 socially vulnerable families and now other shopping center also joined the campaign.

Questions of the discussion participants mostly concerned the following issues: to what extent did other private businesses express interest in contributing to the Red Cross activities and whether or not the organization is planning to provide citizens with the psychological services amid pandemic, on which Nana Burduli responded that there is a hot line, where psychologists provide citizens with mental care services for 24 hours.

In response to the question on how the priorities are set with regard to the beneficiaries, Nana Burduli explained that the main target group of the organization remains to be the socially vulnerable group of population, more precisely the number one priority was given to the citizens over 70 who were staying home amid pandemic due to the safety. After them, the priority was given to the socially vulnerable families of many children and then socially vulnerable in general. Nana Burduli also pointed out that Red Cross Society provided everyone who called the hot line with the one-time packages. People who were left unemployed were also provided.

Regarding the future plans, the organization together with the Austrian Red Cross Society is planning to help more than 100 senior citizens who live alone, by going to their houses in the framework of “Support at Home” program.

The discussion, which was held via online platform ZOOM, was moderated by the local project coordinator Giorgi Tsiklauri.

The project “Promoting Youth Transformational Leaders in Georgia” is implemented by Georgian Institute of Politics (GIP) with the financial support of USAID/Georgia and in partnership with CRRC Georgia.

After Zugdidi, Batumi, and Rustavi Space for Discussion will also be organized for the “Emerging Leaders School” (ELS) participants in Tbilisi on may 11th.