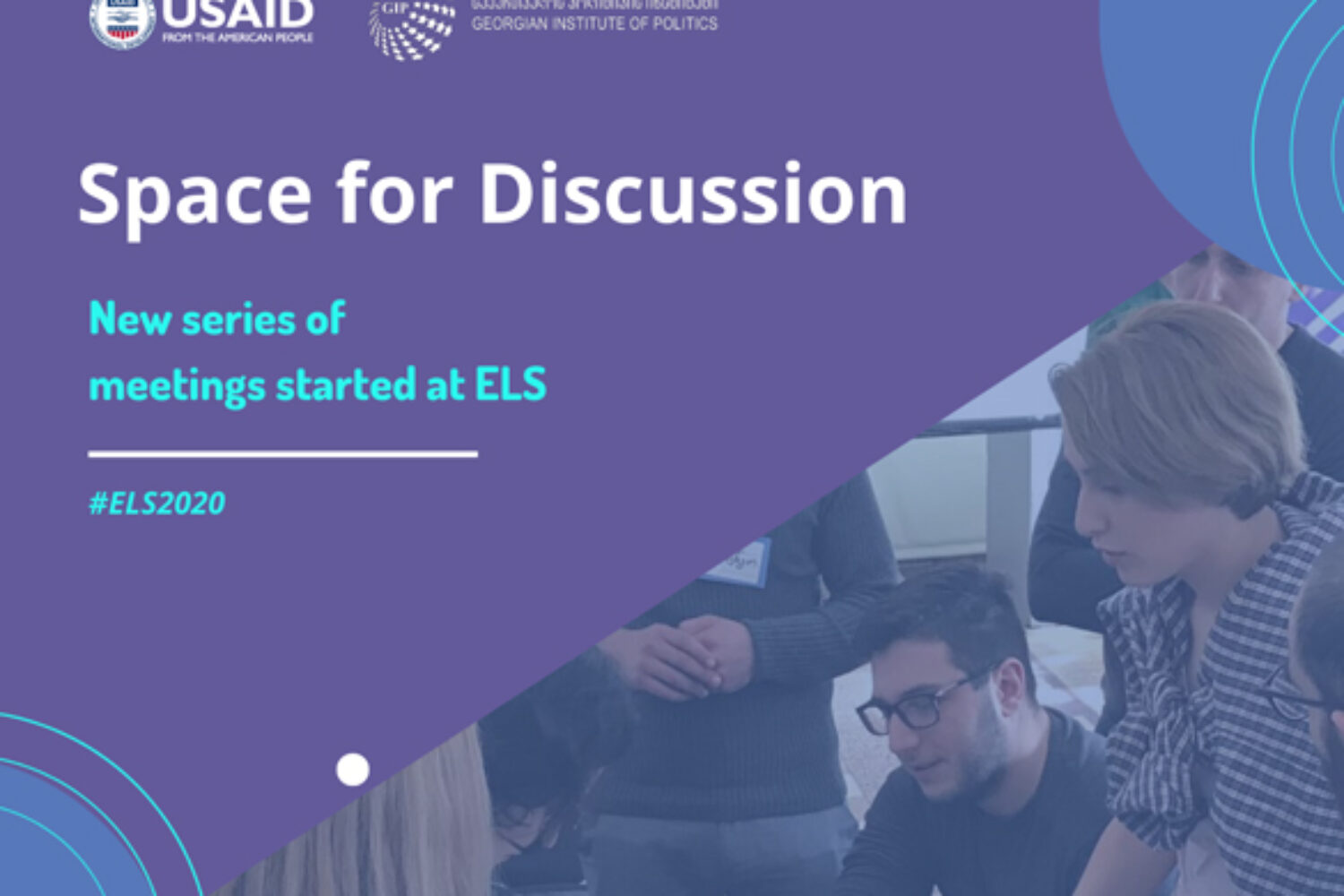 New series of meetings – Space for Discussion has been launched under GIP’s ongoing project “Promoting Youth Transformational Leaders in Georgia”. Space for Discussion is an additional opportunity for the “Emerging Leaders School” (ELS) participants to meet the experts from different fields as well as public and private sector representatives. The participants choose the discussion topic themselves and have an opportunity to get the answers to the questions of their interest from the invited professionals and decision-makers.

On April 29th, the first Space for Discussion event was held in Zugdidi. A local perspective – impact of Covid-19 on Samegrelo-Zemo Svaneti region – was the first topic that the invited representatives from governmental, non-governmental, and medical sectors discussed together.

Key speakers of the event were:

The first speaker – local government representative Aleksandre Motserelia talked about agriculture in the time of pandemic, challenges of the tourism sector, extended loans and future plans for delayed infrastructure projects. He pointed out that the agriculture is one of the most important parts of the government’s economic anti-crisis plan and the Ministry of Environmental Protection and Agriculture of Georgia is expected to present a detailed scheme for supporting agriculture in the near future. Aleksandre Motserelia also talked about the anticipated changes in the aforementioned sector, including increasing opportunities for the beneficiaries of the agroproject “Plant the Future” and increasing the mechanization funds, which is aimed to strengthen farmers and cooperatives. Regarding the tourism sector, the pandemic was most challenging for hotels, which were used as quarantine zones. Aleksandre Motserelia pointed out at the end of his speech that some initiatives aim towards solving those problems will be welcomed from the citizens as well. 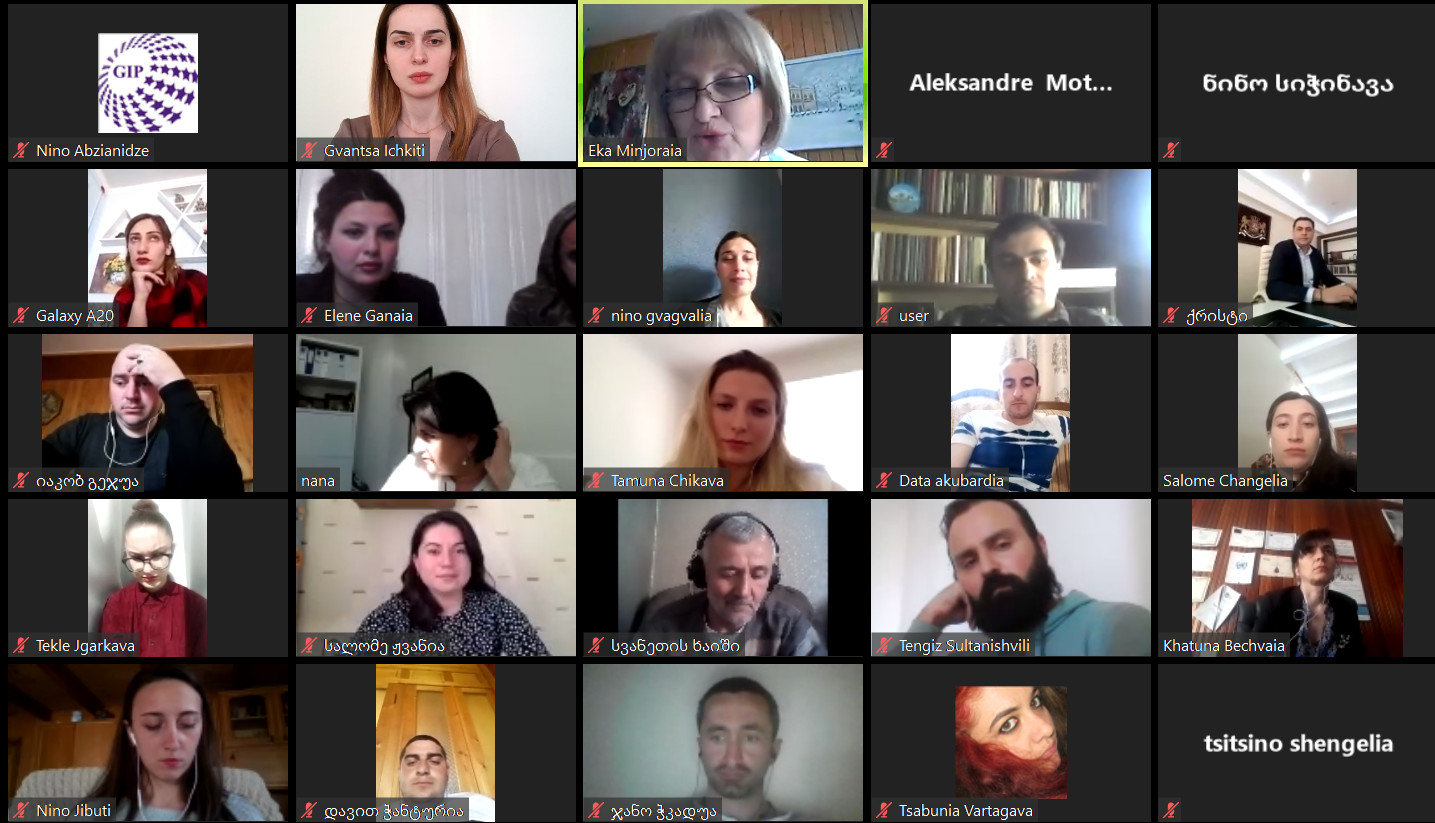 Questions of the discussion participants mostly concerned: distributing agriculture products among the socially vulnerable citizens; providing chemicals against the Cassida Viridis; equipping volunteers and following safety rules; shutting down agromarkets, – what are the standards and criteria set by the government that agromarkets need to follow in order to reopen; rehabilitation of roads in the tourist zones of Svaneti; lack of agriculture technology in Zemo Svaneti, on which Motserelia commented that there is an offer from the private company regarding providing farmers with technology and there is an ongoing negotiation between that company and Ministry of Agriculture on the forms of cooperation between the state and private business. The participants also asked questions about the local action plan, if any exists, for prevention of domestic violence in the time of isolation. There were additional questions regarding the needs and problems related to the status of people with disabilities, which were left beyond the government’s anti-crisis plan and were not addressed.

The second speaker Nana Odisharia – epidemiologist, Director at Zugdidi Municipality Public Health Center  presented a detailed report on the steps taken by the health sector in response to the Covid-19. She touched upon three main issues: individuals who are self-isolated or quarantined, health sector, and laboratory services.

Regarding the questions, the participants were interested in the following issues: training of the medical personnel; how prepared the region is to receive and treat Covid-19 patients; primary health case issues in the villages – if there is a plan to disinfect ambulatory care units and what are some steps taken in order to support those units.

Towards the end of discussion Khatuna Betchvaia – director at non-Governmental Organization “Tanaziari” and Maklhaz Jalaghonia – doctor at “Evex” and “Kuratio” clinics talked about the role of private sector and Georgian citizens in the fight against the pandemic at the local level. They also touched upon the existing restrictions and self-awareness of Georgian citizens. Khatuna Betchvaia pointed out the following:

– “ We had a grant and tried our best to help socially vulnerable groups in general and, first and foremost, beneficiaries of the elderly day care center. It was very important for them to feel that they were not left alone in this crisis situation and that we were supporting them. With the help of the “Women’s Fund in Georgia”, we managed to provide 32 women with medicine, essentials and products based on their needs… A lot of people joined us in this initiative, including the private sector representatives”.

Malkhaz Jalaghonia pointed out that there are a lot of unanswered questions on when the pandemic is going to end. “Covid-19 does not cause high rates of death in our country. There are discussions that the second wave is expected as well. This is a very challenging period, nobody has a definite answer on what steps need to be made and what is the best solution” – he added.

The discussion, which was held via online platform ZOOM, was moderated by the local project coordinator Eka Minjoraia.

The project “Promoting Youth Transformational Leaders in Georgia” is implemented by Georgian Institute of Politics (GIP) with the financial support of USAID/Georgia and in partnership with CRRC Georgia. Space for Debates will also be organized in three different cities, where ELS is implemented – Tbilisi, Batumi (participants from Adjara region), and Rustavi (participants from Kvemo Kartli region).